We're birders.  We have a lovely and large city lot which is roughly in a pie shape with the bulk of it being the back yard and a number of mature trees including three large blue spruce, two smaller blue spruce, two Ponderosa pine trees, a clump of aspen trees, several crapapple trees, a Burr Oak tree, a birch tree, a large green ash tree, and the largest Red Oak tree in Bismarck/Mandan (an unusual species to central North Dakota, transplanted by Dr. Smeenk and his family all those years ago from Minnesota as a sapling, now about 50 feet tall -- hence The Red Oak House we call our home).

We get lots of bird activity here in the center of town on the Missouri River and we encourage this with feeders.  Sharp-shinned hawks perch in the blue spruce and wreak havoc on the feeders -- a carnivorous accipiter species of hawk that feast on hapless songbirds.  I also regularly hear eastern screech owls and we have a house wren home mounted on the fence bordering our back patio, a source of great joy in the summer months here in North Dakota.

Like so many, I find owls to be a particularly interesting species and thrill to see them perched in our trees.  Our friend Dr. Alan Van Norman is perhaps the foremost expert in Bismarck on owls.  The other day I mentioned to him that I had great horned owls regularly perched in my trees and he could come and photograph them and his retort was "you should place a basket in your tree to get them to nest in your yard."   Well, that was a terrific idea in my mind so I brought it up with my friend Mike Jacobs, one of North Dakota's best birders and we brainstormed.  Following that lunch conversation, I researched this, found some information, and hatched a plan to build my own. 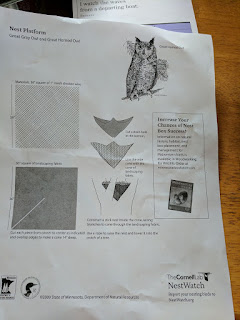 A trip to Hardware Hank and I was all set.  Only my partner-in-crime AKA my husband is laid up with a bad back so I needed to enlist some other helpers.   Luckily our great friends Jeff and Linda Weispfenning are also retired and up for the adventure.   They showed up today and we went to constructing nests.   Jeff had decided against putting one into his trees for various reasons including that they had nesting Cooper's Hawks last year and wanted to give the hawks "right of first refusal". 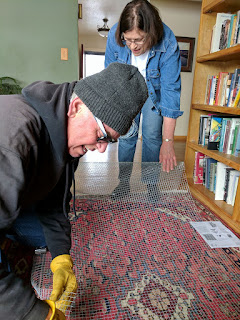 About halfway through this process, Mike Jacobs showed up, and we were happy to entertain him with our labors.  I filled mine with sticks and twigs I'd gathered last fall for our kindling box.  Shown here are Mike's nest without the twigs as well as the extra one we made for another friend, Clay Jenkinson. 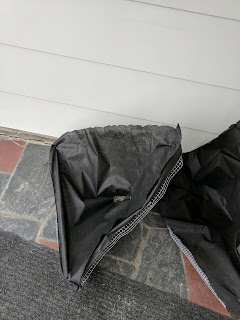 Now it was time to place the nest in the tall green ash tree in the backyard where I regularly see the owls perch.   Jeff got the ladder placed really tight against the tree and up I went, nest in hand, while Jim and Linda stood by as witnesses.  Fortunately I do yoga, so I have good balance and I'm okay on a ladder so long as someone is holding it firm down below and I am careful about not looking down too much.  I wedged that nest into the crook of some branches and then wired it to the branches in about six places to secure it from the howling Dakota winds we get on regular occasion.  There were some jokes about the deep snow being something I would bounce on if I fell off the ladder, but all's well that end's well.  Mission accomplished.   Now I wait for the owls and hope I didn't get it up this year too late for their nesting which has already begun.  I'm hoping to not only observe the owl family, but also benefit from the predation of rabbits in my garden.  Certainly my neighbors wonder what the hell we were up to today, and they might be grateful that we're not out there cussing at the rabbits so damned much.  I'll keep you posted. 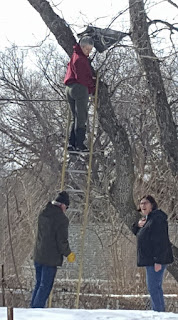 Posted by WildDakotaWoman at 2:17 PM