Because I promised my friend Marilyn I would share with her the photos of my Navajo rugs, I’m writing this blog.  It’s just easier.  I must confess that I feel a little like it is bragging, but, if nothing else, it is documentation for my loved ones.  My husband Jim and I have a lifetime’s worth of Native American art collecting under our belts, thus we own some lovely, treasured pieces.

First, the Navajo rugs.  We have three, all purchased at Goulding's Trading Post in Monument Valley, Utah. 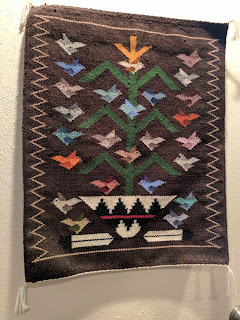 This is called "Tree of Life" and was woven by Lena Begay as shown on the provenance tag I keep in our safety deposit box. 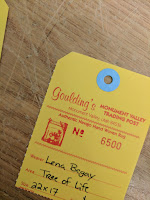 The charming birds attracted me to this rug.  A very knowledgeable friend of mine, a cultural geographer and serious collector of Indigenous art, tells me that it is a very fine rug and has increased in value since I bought it.

Next was this rug. 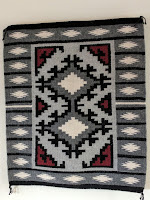 The third rug we own, we purchased at Goulding's when traveling in September of 2008.  We camped and hiked all over western Colorado, New Mexico, and Utah, including Echo Park at Dinosaur National Monument, and all of the iconic national parks of Utah, as well as a few memorable nights at a lovely place in Bluff, Utah, the Desert Rose Inn, and a very fine establishment outside of Moab called the Sorrel River Ranch where we arrived in the dark and woke up in our cabin right on the banks of the Colorado River.  These places were our treat to ourselves after many nights of sleeping on the ground in a tent.   One memorable night was spent near Natural Bridges National Monument when, shortly after setting up camp and eating supper, a thunderstorm brought a downpour. The washes all around us surged with water.  We sat that out in our Jeep, in awe of the power of nature, and, once the floodwaters had subsided, we fled to the nearby town for a motel room and laundromat, returning the next day to hike the entire canyon from end to end.

That autumn, the desert was ablaze with yellow rubber rabbitbrush, so we chose a yellow rug in homage to the scenery. 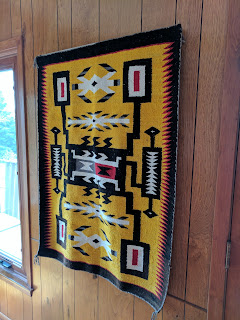 This very old rug, woven by Bessie Little, is titled "Storm" and is from the historic LaFont Collection.   In spite of its age, it is in fabulous condition and greatly cheers our living room walls.

To accompany this rug, we also purchased this piece that demonstrates the various plants that the Navajo women harvest to dye the wool. While at Canyon de Chelly we observed the Navajo people herding their sheep in their oases in the red rock country. 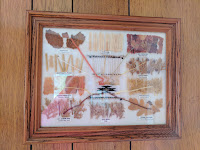 When one loves Native American arts, one must own some of the iconic turquoise jewelry.  I purchased the ring shown below at Goulding's, and the other pieces in the next three photos were gifts to me from thoughtful (and generous) friends. 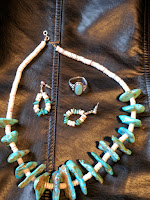 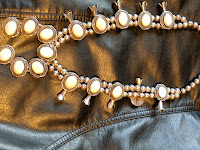 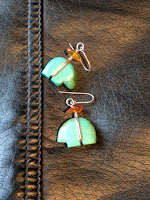 This bear's claw jewelry I bought in 1993 from the Hopi artist James Selina at his roadside stand near the Second Mesa in Arizona.  He told me that the bear's claw is a symbol of strength and power, and it is true that I feel its strength against my skin. 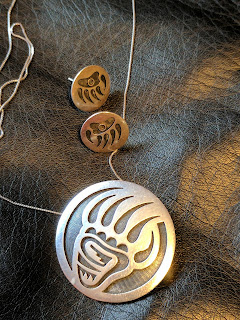 In May of 1999, I rafted the Colorado River, and, on that journey, I purchased this bracelet just outside of Durango, Colorado.   I wear it often and it makes me think of that sinuous river of rivers. 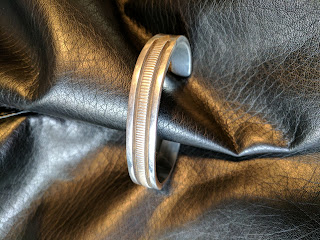 This beautiful handpainted Mandan turtle drum was something I purchased from my friend the geography professor when she was downsizing (she had a huge collection that enriched her teaching).  The feathers drew the unwelcome attention of a USFW agent who was on campus investigating smuggling (she had been to a conference and purchased something from a shady character who was the actual target of the investigation).  The agent was brought to my office one day by the VPAA, something that understandably shook me up.  The feathers on this piece are, it was agreed by all parties, turkey feathers and thus I escaped from this incident unscathed. 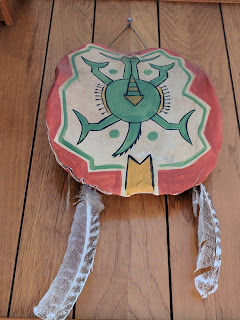 I also purchased this turqouise talismen below from the geographer. 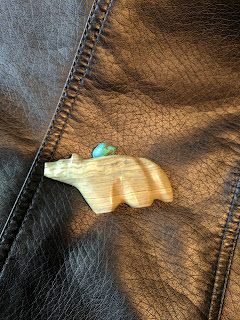 The talented Lavalla Moore painted us this Red-tailed Hawk dreamcatcher on leather she prepared herself. 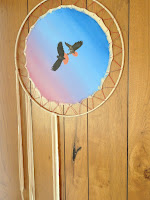 The last piece that hangs in the living room is this Buffalo turquoise jewelry that was purchased at Five Nations Gallery and Gifts, located in the Mandan, ND, depot. 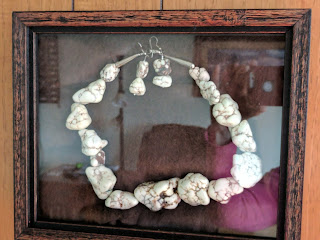 A visit to Pipestone National Monument in Minnesota found us buying this pipe which is hanging in the library along with a Lakota pipe bag and doll. 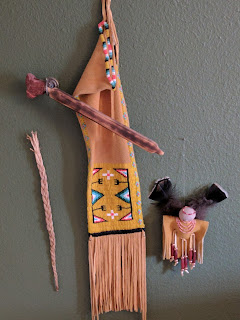 The pièce de ré·sis·tance is a delightful pottery owl I purchased in Santa Fe at the end of our very long 2014 odyssey Jim writes about on his blog From My Cold, Dead Wrist.  This fine example of Santa Domingo pottery called SummerOwl was made by Eddie Pacheco.  He was selling his wares on the historic plaza and it took me a very long time to select something.  This piece spoke to me.  Just this past week I purchased the pottery ring at the Arizona State Museum in which he now nests. 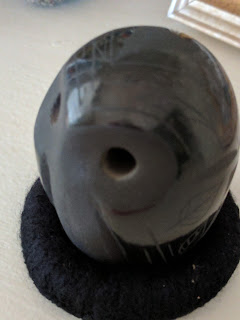 I think my next acquisition is going to be a good basket.  Somehow I managed to resist purchasing one on my recent visit to Arizona, but stay tuned.
Posted by WildDakotaWoman at 3:46 PM