Theodore Roosevelt: the Naturalist in the Arena TR Symposium 2017

As I sit down to write this, I'm listening to thunder and hoping that regular rain will return to the northern plains.

Today I'm reflecting on the Theodore Roosevelt: the Naturalist in the Arena Symposium that Jim and I attended at nearby at Dickinson State University last week, the 12th annual.  We attended the first and several others in the intervening years.  This year's opened on the anniversary of the day that TR took the oath of office as President of the US. 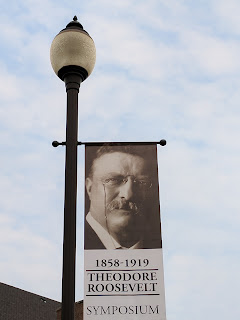 Upon our arrival in Dickinson, we joined a friend for lunch at Badlands Brew, which is a restaurant located in what was once St. John's Episcopal Church. TR is said to have worshiped there on occasion. 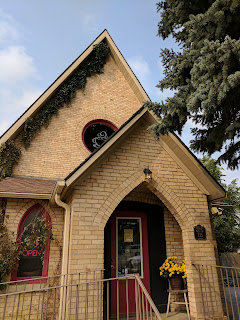 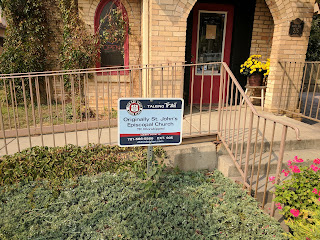 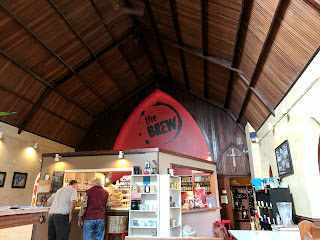 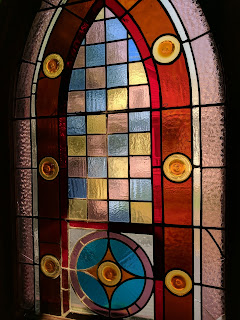 The overarching theme of the symposium was how much TR cared about nature and how he was mindful about what would be left for future generations.  Scholar Clay Jenkinson convened, telling us that within ten to fifteen years the digitization of TR's papers should be complete, a project of the TR Center.  To this, I will add that the Center has an amazing website, full of materials that heretofore were unavailable but to those fortunate few who could travel to sites that held these papers, such as Harvard University and so on. Sharon Kilzer and her staff have created what Clay described as a "widely modeled project."  A "museum more than a library" is now in the works, the first exhibit being the cottonwood logs stashed near the DSU stadium for a replica of TR's Elkhorn Ranch, to be built using 19th-century techniques. These logs are "authentic heritage cottonwood trees from the Little Missouri River valley, cut on more than thirty ranches," said Jenkinson. 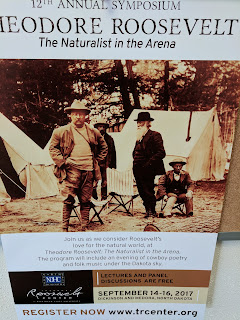 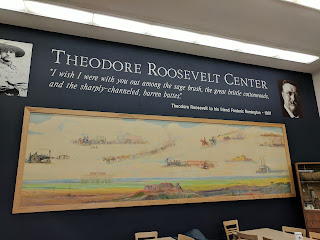 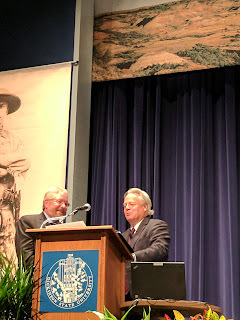 Thursday night's keynote address, "A Field Guide to Roosevelt the Naturalist" was given by Darrin Lunde, who told us it was his first visit to ND.  TR's evolution as a naturalist, starting with his time as a boy, began when he spotted a dead seal on display in a New York store.  TR wrote "that seal filled me with every possible feeling of romance and adventure...."  Lunde, who is a Supervisory Museum Specialist in the Division of Mammals at the Smithsonian's National Museum of Natural History, reported that the seal skull is still in the museum's collections.  TR's father was a founding trustee of the museum.  Lunde recounted that "TR's brother Eliot complained that he really didn't like sharing a room with someone who left the guts of animals in the wash basin" and that TR was more of an outdoor naturalist, rather than a laboratory scientist.   Thus, he came a politician, but "never shed his interest in natural sciences" and his time in the west was "pivotal", said Lunde.  As President, he protected 230 million acres of land and "after he finished in the White House he led a museum expedition, depositing some 23000 specimens from Africa that are studied to this day."  As President, he signed the authorization for the creation of the National Museum of Natural History. 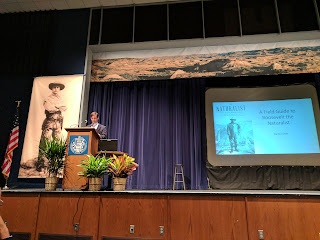 Day two opened with another excellent presentation by Char Miller, a professor at Pomona College entitled "Kindred Spirits: The Remarkable Partnership of Theodore Roosevelt and Gifford Pinchot."   In a fascinating overview of this friendship, participants learned that Pinchot wrote portions of TR's autobiography and they "worked together well because they also recreated together," swimming in the nude in the Potomac River.  "TR used Pinchot as a lightning rod and he understood that they (he and TR) believed that the future had the same right as they had."  Gifford Pinchot wrote, in 1910, "It is a greater thing to be a good citizen than to be a good Republican or a good Democrat." 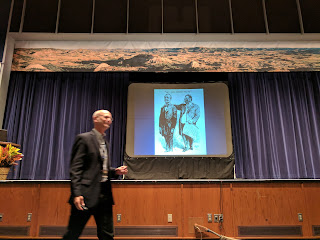 Next up was children's author Barb Rosenstock who talk was "Friendship Under Five Inches of Snow: Roosevelt and John Muir in Yosemite."  Much of what we know about the camping trip TR and Muir took in Yosemite came from the accounts of the man who accompanied them, Charles Leidig, whom some claim to be the nation's first "park ranger." 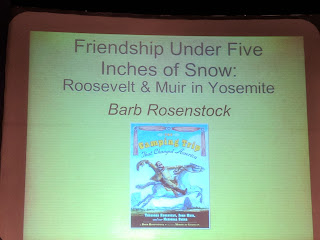 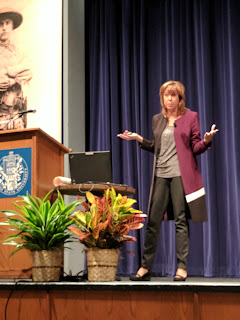 Introduced by former TRNP Superintendent, Valerie Naylor, North Dakota native Duane Jundt gave a talk entitled " 'I So Declare It': Roosevelt's Love Affair with Birds" telling us that TR said, "I'd much rather discuss ornithology than politics." As a birder myself, I found this talk particularly engaging. 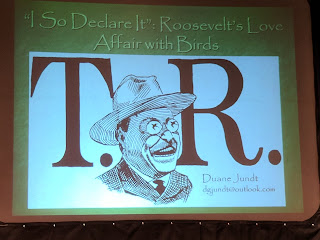 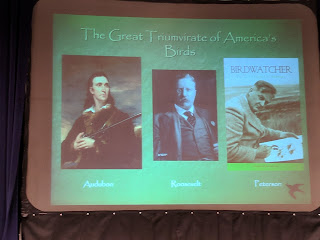 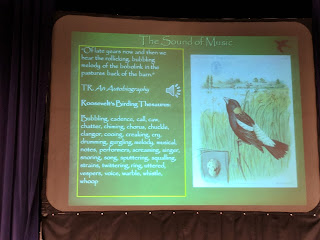 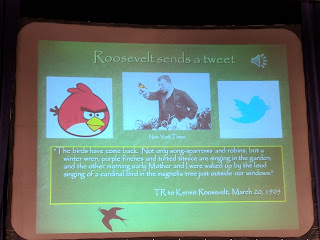 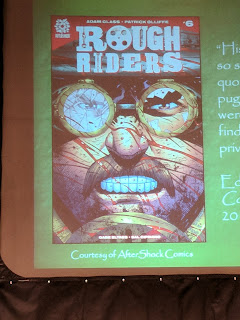 Melanie Choukas-Bradley ended the afternoon with a beautiful talk about "President Roosevelt's Explorations of Rock Creek Park" which is located in DC and now administered by the National Park Service.  She also spoke about Roosevelt Island in DC. 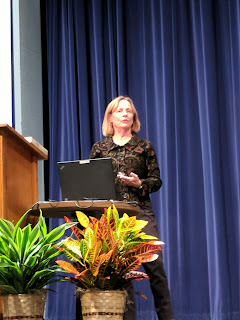 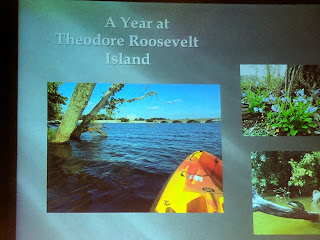 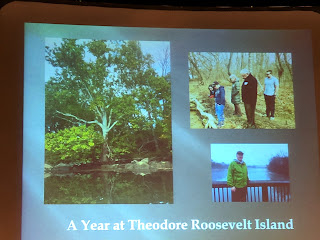 The day of outstanding programming ended with an evening of folk music by Jesse and Gene Veeder, cowboy poetry about the legend of Poker Jim by Jonathan Odermann, and an appearance by President Roosevelt as portrayed by Clay Jenkinson. 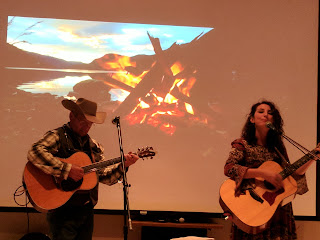 The downpour and cold temperatures on Friday continued on Saturday morning as participants gathered at the Rough Rider Hotel in Medora for the final talk by Clay Jenkinson "Intersecting Genius, 1886: William Hornaday, TR and the Saving of the Buffalo."   At the same time that TR was in Dakota Territory hunting for bison, Hornaday was at nearby Miles City, MT, hunting for bison specimens for the Smithsonian, where he served as Chief Taxidermist.  He had the inspiration to save the species from the threat of extinction. Hornaday created an innovative 360-degree diorama for the Smithsonian that became a model for many others and this "became the centerpiece of the Smithsonian's exhibits from 1888-1957" according to Jenkinson.  "TR and Hornaday formed a partnership that played a huge role in the saving of the bison" and 'now there are approximately 500,000 pure bison in the world."  Under TR's leadership, in 1902 Congress passed an act to protect the bison and, in 1907, TR and Pinchot created the National Bison Range in MT. 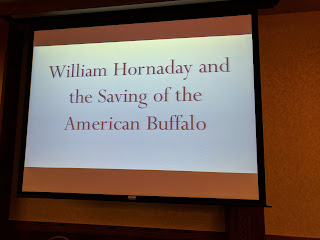 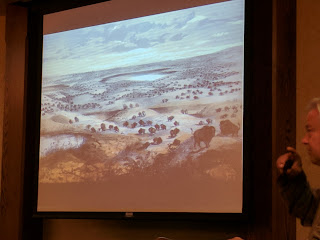 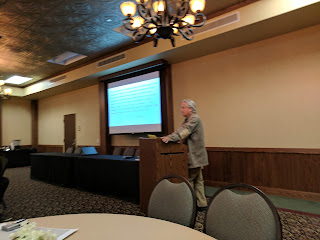 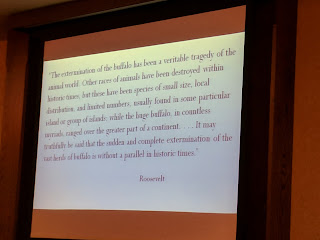 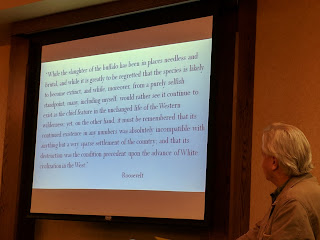 The last event of the morning was a wrap-up of the panelists with audience Q&A. Panelist Duane Jundt encouraged everyone to "identify the place you really care about and work to save it."  Melanie Choukas-Bradley encouraged everyone to think of their address not just in terms of street name and city name, but also as a "watershed address", thinking about home in terms of the streams and rivers near to where you live. 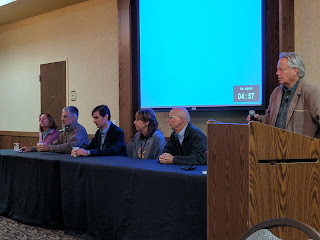 After lunch, the symposium ended with a bus tour of Theodore Roosevelt National Park, as the planned tour of the southern Bad Lands was relocated due to the muddy roads.

All in all, it was an excellent symposium, rich with informative programs and conversations with very interesting people, and the folks at the TR Center are to be highly commended.  Videos of the presentations will be available online at the TR Center web page.  If you've not attended one, I strongly urge you to do so, as there are fascinating topics planned for the future and I fervently believe you will find it time well spent.  The symposia's caliber of scholarship is first rate and the folks who worked so hard to put it on are to be commended!
Posted by WildDakotaWoman at 12:48 PM