Wild Lands in North Dakota: A Red-letter Day in Our History

Today was a red-letter today in North Dakota history, specifically ND conservation history. This morning, at the Bismarck Public Library, the film "Keeping All the Pieces," was released by the Badlands Conservation Alliance and the North Dakota Wildlife Federation (you can watch the film by following the link). Presented by Jan Swenson, BCA Executive Director, and Mike McEnroe, of the North Dakota Wildlife Federation, this 15-minute film dramatically captures the critical stage we find ourselves in with respect to the Bad Lands landscape and the future of this hauntingly beautiful place. Many North Dakotans stepped up for interviews in this film, sharing their deeply-felt personal perspectives and concerns. In the months leading up to this release, Swenson and McEnroe have shown the film in communities across the state to more than a thousand interested parties. Now the film is out there for everyone to see. I urge you to watch it and to share it with your family and friends. 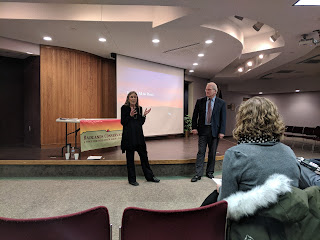 From the flyer available at today's release: "The Badlands are in crisis. Ninety-five percent of the Little Missouri National Grassland is open for oil and gas development. The future of the Badlands should be a decision made by the people, not the oil industry." 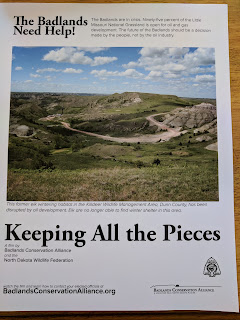 This landscape is the heart of my personal geography, my sense of place. I grew up in rural Slope County, in the southern portion of the Little Missouri National Grassland. Jim and I have been working on these issues for decades, with BCA, and other organizations, and in his entries on his The Prairie Blog. Together, on our own, or with friends and family, we've spent countless days and nights in the Bad Lands, camping, hiking, canoeing, kayaking, star-gazing, birding, and hunting. As Swenson says in the press release for this film, "We do this now or we lose our Badlands."

Also on my mind are two publications that were released some time ago, documenting the lands worth saving and calling for more permanent protections. The first was Badlands on the Brink: North Dakota Wilderness and Wild and Scenic River Proposal, published by the Teddy Roosevelt Group of the Sierra Club, in May 1993.  I hope to have a link to the pdf of this proposal in the future to post on this blog, as copies are difficult to locate.

The second is a document that I contributed to, along with Jan Swenson, Bart Koehler, Kirk Koepsel, Carol Jean Larson, Larry Nygaard, Mary Sand, Wayde Schafer, and Webster Swenson. Prairie Legacy Wilderness: North Dakota's Citizen's Proposal for Wilderness on the Dakota Prairie Grasslands, is a proposal by the North Dakota Wilderness Coalition, a broad variety of ND citizen organizations, made up of people who believe that the remaining fragments of wild lands in North Dakota are deserving of lasting protection. It was published in February 2008 and is available on the Badlands Conservation Alliance webpage by following this link.

What is important in this issue to remember is this: in the early 1970s, 500,000 acres of the Little Missouri National Grassland qualified for wilderness designation, By 1993, when Badlands on the Brink was published, only slightly more than 150,000 acres of potential wilderness remained. By the time Prairie Legacy Wilderness was released, less than 40,000 eligible acres remained wild. 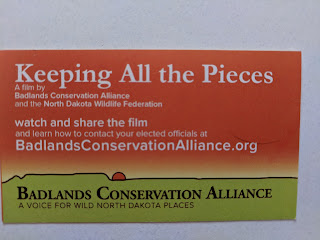 Please get involved in these discussions. View the film. Join a ND conservation organization that is actively working on these issues. Make your voice heard for wild North Dakota lands to endure for the enjoyment of future generations.

My heartfelt thanks to Jan Swenson, Mike McEnroe, and everyone else who contributed to the making of this fine film. I will confess that when I was shown an early version of this moving film, I shed tears.

". . . where Nature can heal and cheer and give strength to body and soul alike." John Muir


Posted by WildDakotaWoman at 1:21 PM