The daylilies are coming fast and furious, accompanied by a fierce outbreak of mosquitoes. I have 189 varieties of daylilies. My sister, Beckie, and I collect these and together we have 225 varieties. We also belong to the Bismarck Mandan Daylily Club and have great fun together at the annual auction.

On Sunday, my absolute favorite of all of the 189 burst forth with its first blooms: Wide Wide World. There will be weeks of pleasure from this plant, which I strategically placed right next to my patio for maximum enjoyment.


In the vegetable beds, Jim has so far trapped 15 voles, so he is triumphant. The magic formula turned out to be half a peanut super-glued to a mousetrap, and he runs his trap line twice a day. The photos below show the initial crop of new potatoes and the damage the varmints can do if left unchecked. 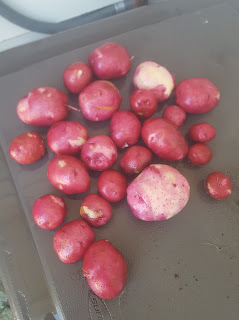 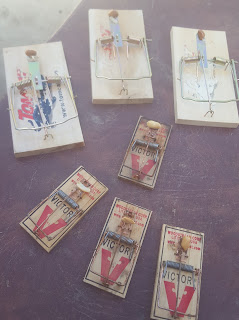 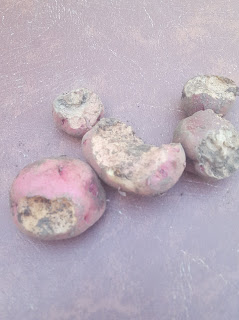 He also spends a good portion of his time harvesting vegetables. The cucumbers are coming on big and pickle-making will commence any day now. His special thrill was discovering that his pepper crop is ripening early this year. Peppers are tricky to grow here in the north country and last year he had to ripen these in brown paper bags, late in the autumn. 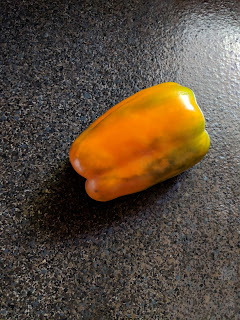 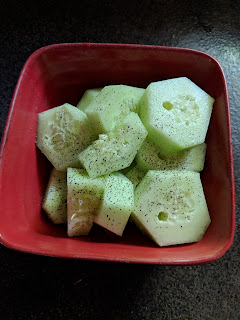 Below is a gallery of some of the newest daylilies to open, along with a few zinnias for good measure. 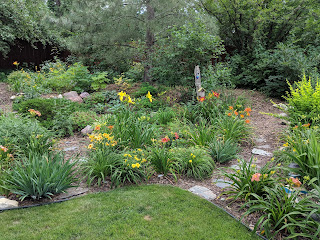 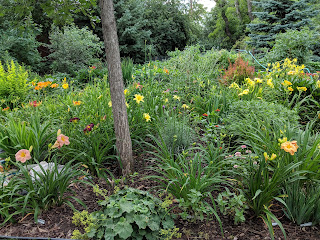 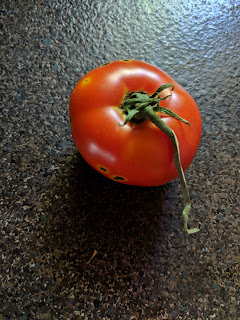 Further in Summer than the Birds -
Pathetic from the Grass -
A Minor Nation celebrates
It's unobtrusive Mass -
No Ordinance be seen -
So gradual the Grace
A pensive Custom it becomes
Enlarging Loneliness -
'Tis Audiblest, at Dusk -
When Day's attempt is done -
And Nature nothing waits to do
But terminate in Tune -
Nor difference it knows
Of Cadence, or of Pause -
But simultaneous as Same -
The Service emphacize -
Nor know I when it cease -
At Candles, it is here -
When Sunrise is - that it is not -
Than this, I know no more -
The Earth has many keys -
Where Melody is not
Is the Unknown Peninsula -
Beauty - is Nature's Fact -
But Witness for Her Land -
And Witness for Her Sea -
The Cricket is Her utmost
Of Elegy, to Me -


Posted by WildDakotaWoman at 1:38 PM