The Hour of Land 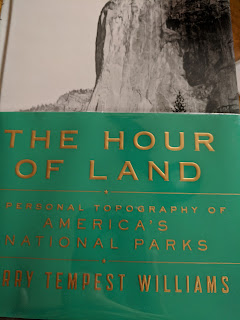 The National Park Service observed its centennial in 2016. During this year the writer Terry Tempest Williams published The Hour of Land, her personal journey and meditation on the national parks, essays written as she traveled the country visiting some of the iconic sites that so define this country.

“There are few contemporary nonfiction writers who can capture the essence of the American wilderness landscape as eloquently and intimately as Williams. Noted for writing about the American West, her distinctive prose style is capable of conveying a deep spiritual dimension within the physical setting. This is very much in evidence in her latest book, a broadly ambitious and deeply impassioned collection of essays on a select group of settings within the national park system.” Kirkus Reviews

Williams, the writer of many books and a personal friend of mine, is one of the most eloquent voices writing about American lands in this time. One of the early chapters of this book features the former Superintendent of Theodore Roosevelt National Park, Valerie Naylor, and, thus, the challenges that are so familiar to readers of Wild Badlands. When Williams was a guest speaker at TRNP during the anniversary celebrations, the house was packed and her warm wisdom kept everyone enthralled.

When I am feeling discouraged about the challenges that the Bad Lands face, I often turn to her writing to ground me and give me courage and fortitude. Hers is an excellent voice to join with those of BCA and this book is a gem I give my highest recommendation.

Posted by WildDakotaWoman at 11:29 AM