We went away over Christmas for a winter interlude with my sisters and their families and my mother, gathering in a large house in the woods of the Black Hills of South Dakota.

Driving west across the Memorial Bridge, we could see chunks of ice in the Missouri River. We traversed familiar west Dakota roads, in the midst of the first true cold snap of the season, all of our cars loaded full of passengers, food, and family.  As I drove, I counted twenty-two ruffed-legged hawks from Belfield to Belle Fourche and spotted a large herd of antelope south of Crow Butte. The prairie was mostly brown (the drought continues) and we only experienced one near-whiteout south of Buffalo. 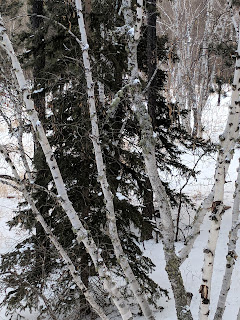 The rental house was in the aspen and pine forest near Lead, SD. We work together as a well-oiled machine and, in no time at all, we had transformed the house to our gathering space for the next four days, each of taking turns cooking the meals and performing KP. A long folding table was heaped with cookies and other holiday treats, and, at the end of this table, we set up a bar. Some of the famous Walby Tom & Jerrys were whipped up too and the wine was uncorked. 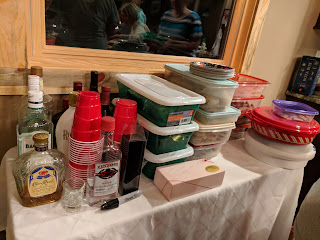 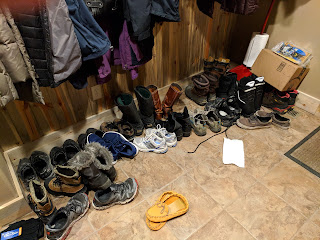 Jim & I attended Christmas morning mass in Lead. For the next four days, everyone did what made them happy, a variety of activities that included card and board games, reading, movies, visiting, napping, downhill and cross-country skiing, and snowmobiling, sprinkled with a few visits to the nearby Deadwood casinos. 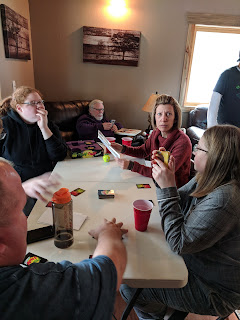 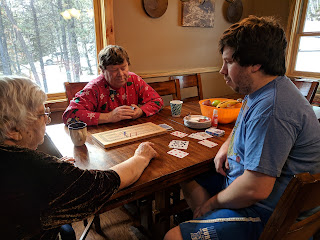 We had given each other books for Christmas and, taking turns, both read the new Louise Erdrich novel (too bleak for my taste). We caught up with the kids who live on the east coast and played lots of pinochle and cribbage with my mother. 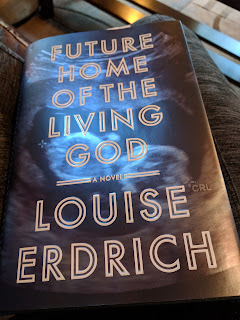 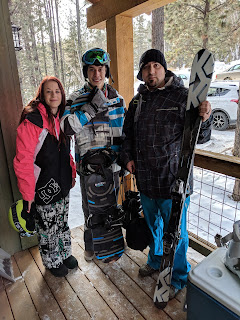 The first couple of days were bitter cold, but the youngest headed to Terry Peak right away for some skiing.


My mother is a stitching wizard and she presented me with a beautiful new apron, with the words "Red Oak House" and some of the leaves of the plants in our yard. We were particularly happy to have been able to bring her on this trip as she has a deep love of the Black Hills and seldom is able to travel anymore. 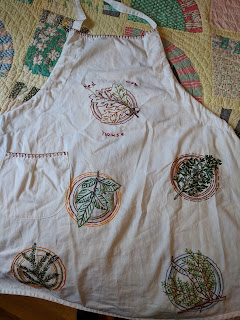 My sisters and I bundled up and took a walk, stretching our legs and exploring the area. There was adequate snow and more in the forecast. Later on Christmas Day, our friend, Valerie Naylor, who lives nearby, came for a visit. 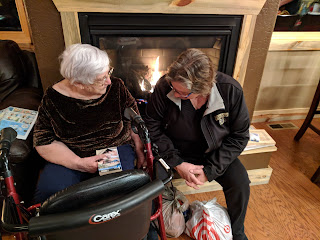 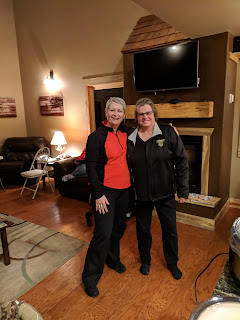 The two fireplaces were quite popular with everyone, as was the hot tub. Relatives who live in the southern US texted me that we were very hearty folks, having seen the news of the temperatures in the Dakotas.

On day two, Jim & I drove over to Spearfish Canyon and took a two-mile hike to Roughlock Falls, relishing the fresh air and quiet grandeur. There were a few other folks on the trail, here and there, but we mostly had it to ourselves. 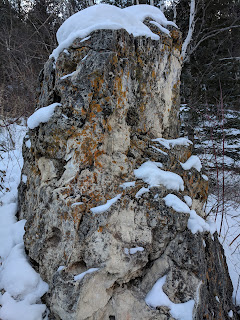 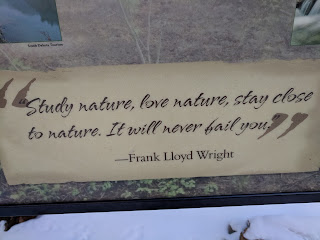 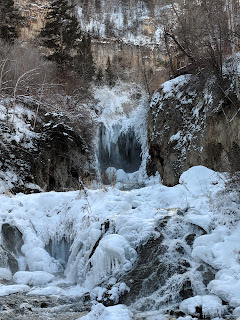 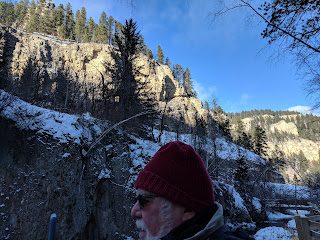 On day three, my sister, Beckie, and I took our cross-country skis to Eagle Cliffs trails and did a few loops in the lovely powder snow, and burned off some of the cookie calories. It was very peaceful there and we saw no one else on the trail. 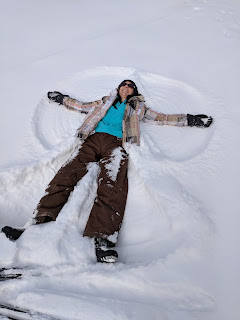 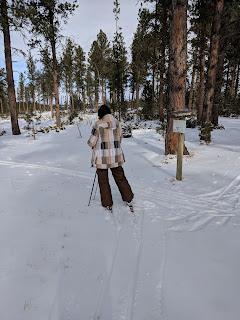 With the sunset, came the first flakes of an all-night snow, and, in the dawn light, we could see that there were about six inches on all of our cars. Time to load up and head north to our homes!  The temperatures were a little on the upward trend Thursday, but the forecast of more frigid weather was on our minds. 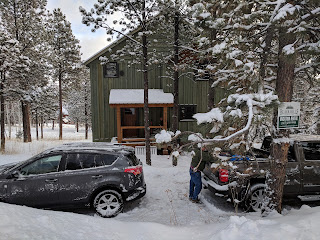 My mother rode from Bowman with us and, as we passed through Slope and Stark counties, I enjoyed her stories of those old days so long ago. She has very interesting and funny memories.

Today has been unpacking and dealing with Chelsea's dead car battery, greatly touched at the friends and family who had attempted to assist her in our absence. While Jim got her car going, I hauled in heaps of firewood in preparation for the upcoming cold snap. 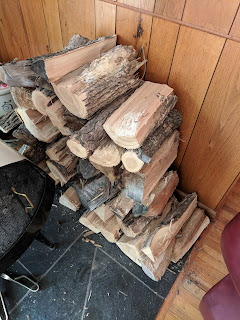 The Missouri River is now frozen over and will be for the foreseeable future. My husband has ice-fishing on his mind. Our gardening boots are replaced by winter boots. I've had my trusty black Sorels for twenty-five years now. 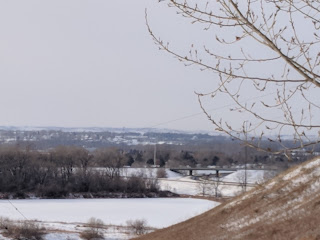 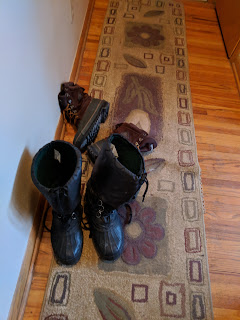 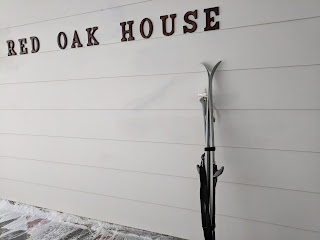 It is time to add another down comforter to the bed and settle in, reading books, writing manuscripts, and fighting the proposed refinery near Theodore Roosevelt National Park.  And maybe we will squeeze in the Bismarck Christmas Bird Count.

This poem by T.S. Eliot is on much my mind today as we anticipate the Epiphany. I hope you enjoy it as much as I do.

The Journey Of The Magi

A cold coming we had of it,
Just the worst time of the year
For a journey, and such a long journey:
The ways deep and the weather sharp,
The very dead of winter.
And the camels galled, sorefooted, refractory,
Lying down in the melting snow.
There were times we regretted
The summer palaces on slopes, the terraces,
And the silken girls bringing sherbet.
Then the camel men cursing and grumbling
and running away, and wanting their liquor and women,
And the night-fires going out, and the lack of shelters,
And the cities hostile and the towns unfriendly
And the villages dirty and charging high prices:
A hard time we had of it.
At the end we preferred to travel all night,
Sleeping in snatches,
With the voices singing in our ears, saying
That this was all folly.
Then at dawn we came down to a temperate valley,
Wet, below the snow line, smelling of vegetation;
With a running stream and a water-mill beating the darkness,
And three trees on the low sky,
And an old white horse galloped away in the meadow.
Then we came to a tavern with vine-leaves over the lintel,
Six hands at an open door dicing for pieces of silver,
And feet kicking the empty wine-skins.
But there was no information, and so we continued
And arriving at evening, not a moment too soon
Finding the place; it was (you might say) satisfactory.
All this was a long time ago, I remember,
And I would do it again, but set down
This set down
This: were we led all that way for
Birth or Death? There was a Birth, certainly
We had evidence and no doubt. I had seen birth and death,
But had thought they were different; this Birth was
Hard and bitter agony for us, like Death, our death.
We returned to our places, these Kingdoms,
But no longer at ease here, in the old dispensation,
With an alien people clutching their gods.
I should be glad of another death.


Posted by WildDakotaWoman at 2:04 PM