The New Wild West: Black Gold, Fracking, and Life in a North Dakota Boomtown by Blaire Briody (St. Martin’s Press, 2017)
A book review by me, published in The Bismarck Tribune Dec. 3, 2017 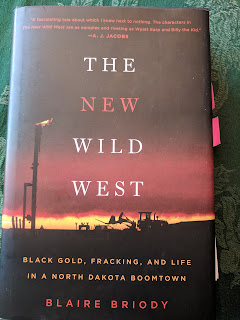 Readers of the Bismarck Tribune will recognize several of the principal characters in this book in which Blaire Briody tells the story of the Bakken Oil boom in western North Dakota. Briody intersperses the stories of many individuals, including a Willison pastor who becomes infamous for his Overnighters program at his church and Donny Nelson, a McKenzie County rancher, along with transplants from places like Kentucky and Utah, people in search of jobs in the wake of the recession, flocking to North Dakota, in spite of the lack of housing and infrastructure.

Briody, a reporter by training, moves to a trailer on the outskirts of Willison, a place where men greatly outnumber women, and sets herself to learning more about the Bakken by getting to know individuals she features in the book. She writes “North Dakota’s Bakken region, about the size of Delaware, accounts for 40 percent of the growth in U.S. oil production…[where it] became the number-two oil producing state in the nation…The pristine prairie transformed almost overnight into a maze of heavy industry and oil wells, with thousands of workers relocating to the state. The drilling was so frenzied and chaotic that David Patraeus, the former CIA director and U.S. Army general, referred to the region as a ‘war zone’ during his visit in 2013.”

The transformation of Williston from a sleepy prairie town to boomtown forms the core of the book. The chapter on the effect of the boom on the Fort Berthold Indian Reservation was particularly dispiriting to read, with administrative neglect and environmental disasters taking a toll. “More than 4,000 brine spills have been documented in the state since the boom began….Unfortunately, state records and industry documentation of how much oil and brine spills is poor.”

The book ends with the downturn that began in late 2014 and Briody summarizes it all by detailing what the individuals she had featured were doing with their lives in the wake of this development. Most have moved on. “For the tens of thousands who migrated to Williston and soon left, the boom will likely fade into a distant memory.” Rents have gone down, cities are left with huge debts and empty buildings, and the prairie residents will continue on with their lives, forever altered by what has happened in the “New Wild West.”
Posted by WildDakotaWoman at 10:02 AM