While digging through a box in my basement this week, I made a discovery that pleased me to no end: my old CD of Shawn Colvin's A Few Small Repairs, something that I thought was long lost.

It is the twentieth anniversary of the release of this Grammy winner and I'd seen the announcements on Colvin's Facebook, so this was on my mind.  You can read more about that special release on her web page.

Her album helped me get through a very rough patch in my life.  Through the magic of the internet, I am able to listen to a digital version on my laptop, but it was nonetheless very cool to hold my old relic in my hands and put it into my car for repeated listening.   I know all of the lyrics and sing along with abandon. 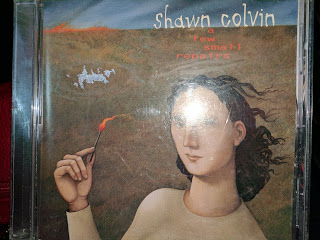 Colvin is a native South Dakotan, and she is more than a singer and songwriter.  Her 2012 memoir is a great read. 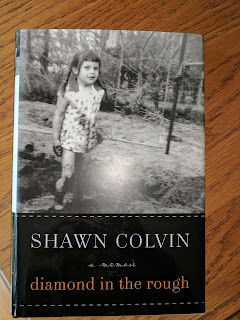 Many years ago, I took my daughter to the Telluride Bluegrass Festival and Colvin was on the billing.  Alas, she had to cancel due to an illness. A few years ago, I won tickets in a Prairie Public Radio drawing, and my husband and I were able to see her (with Steve Earle) at The Bluestem Theater in Moorhead, MN.  It was a mighty fine concert.

The Facts About Jimmy, written by Shawn Colvin

Little did I know that in later years I would marry a Jim!  Perhaps that is one clue to the alchemy of our marriage.


Posted by WildDakotaWoman at 10:27 AM