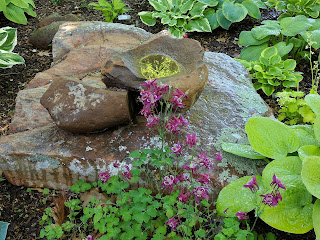 Odds and ends it is.

While we had frost on our cooler on Tuesday morning in the Bad Lands, by Friday the thermometer in our Bismarck home recorded 100 degrees!  That, gentle reader, is too extreme.  But, the walleye are biting on the Missouri River and the gardens look splendid (well, some of the new annuals are pretty wilted from the extreme heat so on go the sprinklers).   The arrival of heat causes me to close the shutters on the French doors to the living room deck. Fortunately, most of the summer here on the northern Plains, we can open all of the windows in the evening and the house cools off nicely. 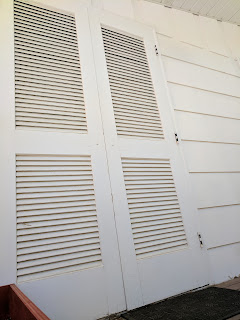 Saturday morning, I met Jim at Sibley Park after his daily fishing excursion for a little birding.  He's been hearing a bird from the boat he had hoped I'd be able to ID.  I heard it, but I can't pinpoint the call and it definitely not the black-billed cuckoo I had hoped.  We did spot a pair of evening grosbeaks as well as a frisky catbird in the dense brush, along with all of the usual suspects in that location.  I sent a plea to the ND-Birds online network so we'll see if someone else comes up with the correct identification.  All of this makes me think of Miss Jane Hathaway.  Remember her from The Beverly Hillbillies?  A very smart woman who was a birder and suffered from many stereotypes of the time period.

Back in our yard, the Korean lilac I planted six years ago has finally matured.  I deliberately placed it next to our bedroom window so we would enjoy its heavenly scent while in our slumbers.   A gardener must be thoughtful and patient in her endeavors. 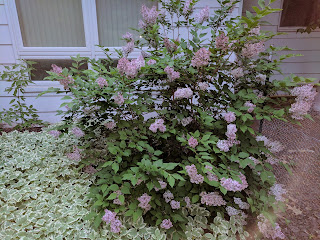 With this heat and the sunshine, the irises are exploding.  The early dwarf irises are finished. 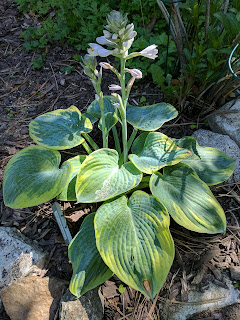 I have 121 varieties of hosta and Tokudama Hosta won the contest for the first blossom.


Here's the view now from our dining room window.  Beats looking at the huge snow banks we had out there last winter all to heck! 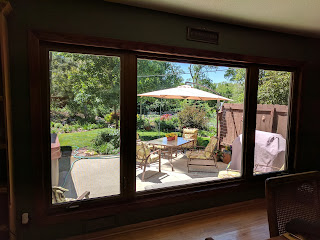 Other than the pulling of weeds and watering and dead-heading, the gardens are now mostly on auto-pilot.  Time to take out a book, find a spot in the shade, and enjoy the beauty.  Lizzie, the Springer Spaniel is totally down with that notion. 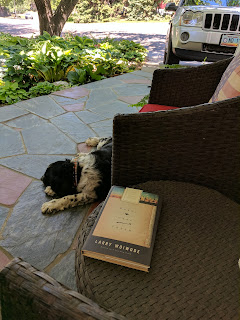 I learn a new word I like very much from Woiwode's book:

My sister Beckie and her husband Jason stopped by Saturday afternoon whilst out riding on their Harley.  Said they'd had enough of gardening and work around the house and decided to take some time for pleasure.   You can see that some serious polishing on this baby has taken place. 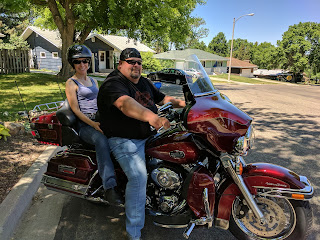 I'm pretty certain that our neighborhood of central Bismarck has the friendliest mailman in the U.S.  Jamie & I chat often.  If I'm laboring the front garden, he often says "Keep up the good work!"  Sometimes on really hot days, I give him a popsicle if I have these in the freezer.  We agree that Friday was too darned hot! 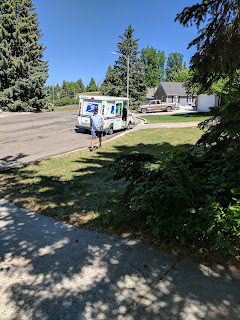 At Pentecost Mass this evening, we saw our nephew Ryan who is now taller than me, something which he has been waiting for many years now to be able to say. We've been buds all his life, and right now we both have braces as you can see from the picture below.  He was ahead of me on that so he tutored me on the ins & outs.  He & I are going to celebrate when the braces come off.  Party time! 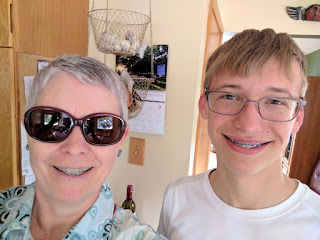 Paul Simon is performing on Prairie Home Companion whilst we cook.  Later this month, we're going to see Paul Simon on his tour through Billings, Montana.  The proceeds from his tour are going to benefit the E.O. Wilson Foundation so we are feeling not just excited about seeing the great Paul Simon, but also pleased that such a worthy project is being supported by our hard earned cash.  If you are interested in learning more about E.O. Wilson, this excellent PBS special is quite educational. 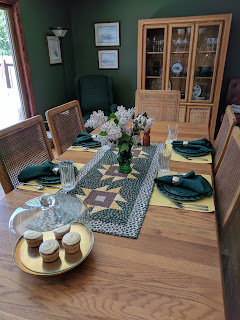 Good friends Christine Hogan and Larry Dopson came to Saturday night dinner -- fresh walleye! We both love to cook and we especially like cooking for family & friends. They brought a bottle of Rambauer with them.  We killed it.

"Respect, I think, always implies imagination--the ability to see one another, across our inevitable differences, as living souls." Wendell Berry
Posted by WildDakotaWoman at 6:37 PM