The Prairie Paintings of Ken Rogers

A most delightful evening soiree was held at the Linda and Chuck Suchy farm south of Mandan last night.  The occasion was a showing of Mandan's artist Ken Rogers' "plein air" oil paintings, centered on the paintings Ken has recently done of Albert Jankus' place.  Albert, a longtime neighbor of Suchy's, has recently moved to Mandan.   We were thrilled and honored to be among the guests. 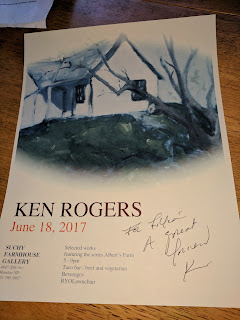 From the evening's handout, written by Ken Rogers
"Chuck Suchy, in late June of 2016, told me about a farmstead in the Heart River valley southwest of Mandan which he described as something you would see in eastern Europe--probably in National Geographic: simple, everything well-crafted and preserved. It would be wrong to call it abandoned, however, the farmer no longer lives there.
I told Chuck I would like to paint there, and he agreed to make arrangements...Several months later, in mid-September, I followed Chuck, down gravel roads, two-track grassy trail and through two gates to the farm.
The farmstead had been the home of Albert Jankus, who's in his 90's....He's a member of the Bohemian Hall, one of those ethnic community and funeral organizations to which first and second generation immigrants on the prairie belong.
The derelict farm machinery surrounding the place appeared to be either horse-pulled or for pulling behind those old tractors with cleated steel wheels. The house was neatly, if not freshly, painted....Everything is picked up and in its place.
Periodically, I painted at the farmstead until early November. It was a great way to spend the fall....
The paintings are all 'plein air,' accomplished on site in two hours more or less. They are oil paint on board (masonite).
The farm, and, in some small way, these paintings are a tribute to the life and work of Albert Jankus." 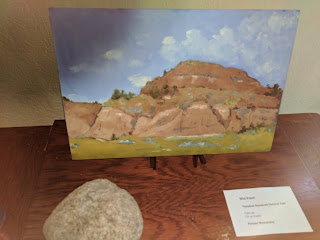 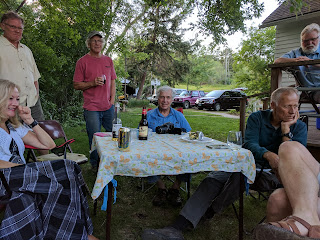 "Plein air" is a French expression meaning "open air" that refers to creating a work of art outside.  What genius it was for Ken to paint the beauty of North Dakota and how privileged were we to be with good friends for this special event. 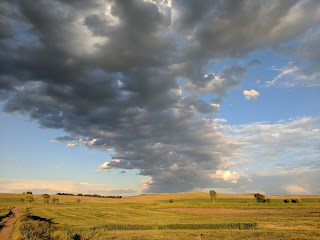 Leaving the Suchy's Morton County farm to return to the city is difficult, as the peace of the prairie is so present there.  Until next time, thank you to Chuck and Linda, and to Ken.
Posted by WildDakotaWoman at 8:26 AM