On Sunday, a sunny, pleasant, blue-sky day, we wrapped up things in the yard at Red Oak House. The eponymous tree and the others in the yard put out millions of leaves and most have now fallen. Sadly, odd weather this year caused most to turn an odd, brittle green, and fall from the trees without regaling us with color.

I picked up the largest Red Oak leaf I've ever found and preserved it. I remembered that, as a child, we saved leaves by ironing between two sheets of wax paper, something Jim said he'd never heard of. So, I gave it a whirl and it worked like a charm. 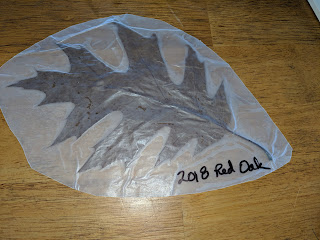 Here is another photo of the leaf with a tube of lip balm for perspective. 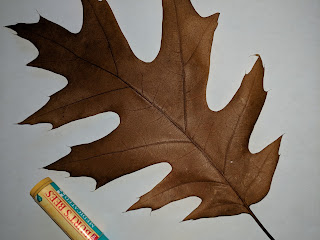 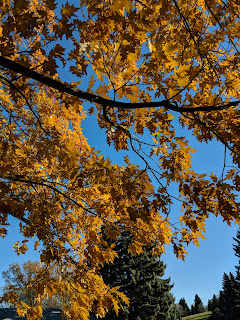 Jim raked and I hauled more than a dozen loads to the garden and the compost pile. The garlic, strawberries, asparagus, and irises are now mulched. The gutters are clean and (we hope) the roof has been fixed. The snow shovels and roof rake are staged and I've filled the suet feeder (I'm watching a Downy Woodpecker on it as I write).

Today, I've polished my work boots and tucked these away until next year. Perhaps I care for my work boots as the child of an Army man or maybe it is from my roots as a grandchild of farmers and ranchers. 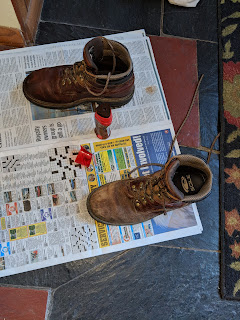 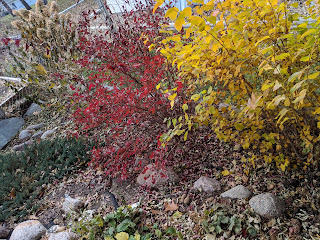 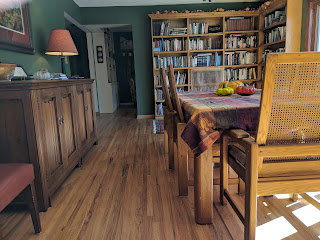 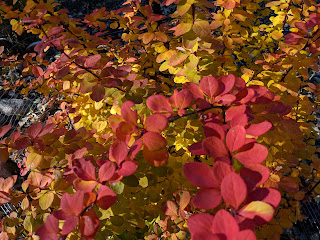 Time to tackle that pile of winter reading and chores I've been accumulating. And prod Jim to get going on our manuscript. Feel free to prod him too. 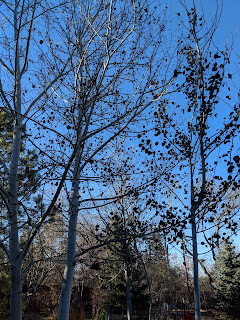 Posted by WildDakotaWoman TM at 11:26 AM No comments:

Quixotic quest for the Thick-billed Kingbird: Notes from My Wild Life

The newsflash on the ND-Birds listserv Monday afternoon of the sighting of an accidental bird near Cross Ranch State Park triggered what has been for me a quixotic quest to see it for myself.


The Thick-billed Kingbird's territory is in far southern Arizona and New Mexico, along the border with Mexico. This particular bird was very lost and its sighting has been described as perhaps the "most accidental bird sighting in North Dakota" ever. After four decades of birding, I've never seen one.

With almost no other details on its location, Jim and I jumped into the car, knowing that there wasn't much daylight left, and headed to Cross Ranch, with the hope that fellow birders would post more details prior to our arrival or that we'd cross paths with them. It was a gamble, and a gamble we lost. We wandered around until dark looking for our birding friends and managed to acquire some damage to our car when I failed to spot a log in some tall grass and hit it hard. Jim just laughed and said, "I love an adventure!"

We did get to watch the gorgeous Hunter's Moon rise up over the banks of the Missouri River and found a huge Bald Eagle nest.

Later that night, more details about the sighting and its location were shared. Here is the link on EBird that tells about the initial sighting, along with some photographs. Some intrepid birders stumbled upon it and that is how the magic happens!

Sadly, I wasn't able to join my friends on Tuesday when they made another search due to family responsibilities. They succeeded. I made a plan to head back up there today.

Cross Ranch State Park is one of ND's most special places and easily accessible from Bismarck. I've been there hundreds of times, attending most of the bluegrass festivals held there each summer, as well as camping and canoeing and kayaking and cross-country skiing many times in this beautiful place, along a free-flowing stretch of the Missouri River.

Today, I traveled there solo, certain that I would come across other birders. I saw absolutely no one as I hiked to the site as per the GPS coordinates and the map one of my birder friends had shared. It was a gorgeous 65-degree Autumn day and the box elder bugs were thick at the Visitors Center. 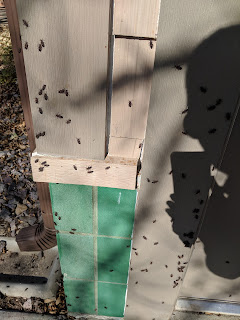 I followed the river bank which took me off-trail. My first thought was: at least there are no ticks. A few seconds later I realized that there was a different hazard and it didn't take me long to acquire hundreds of cockleburrs. 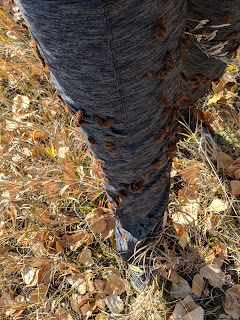 Once I reached the site, I sat on the sand dunes beside the sandbar willows and soaked in the quiet, and the beauty of the place. The leaves have fallen from the cottonwoods. I spotted some orange bittersweet berries here and there, and the buffaloberry bushes are loaded with fruit.

But, once again, I failed to see the desired bird. In fact, it was striking how few birds I saw today. A golden eagle soared high overhead and, in one of the ponds between the sandy bank of the river and the cottonwood forest, I flushed six Wilson's Snipes. 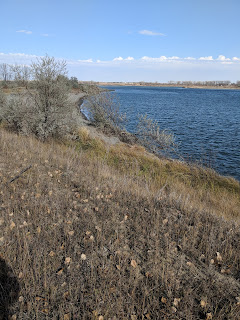 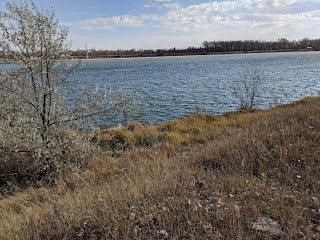 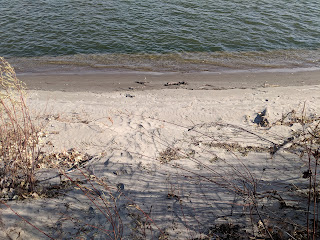 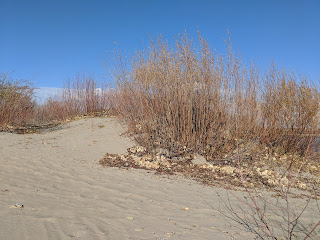 Trudging back to the car, I couldn't help but think about the mountain lion that was shot by a bowhunter north of Bismarck last week. I've spent so much of my life in offices, in meetings, in medical facilities, and in front of a computer screen. Even though I didn't see the bird, this was a grand day. 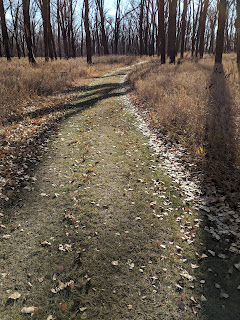 But, it just hasn't been my week. The day ended with a flat tire. This was one expensive non-sighting. 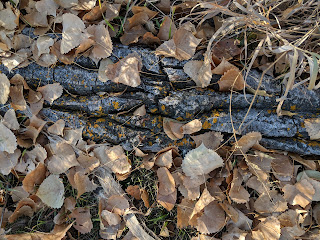 Guess I'll just have to head to Arizona someday to see that bird.
Posted by WildDakotaWoman TM at 4:45 PM No comments:

We finally have blue skies in North Dakota today, after a long spell of gray weather. We are grateful to go into winter with the moisture, but the dreariness was beginning to wear thin. At least we didn't get the heavy snow that hit the eastern part of the state. We got a little snow last week and it pretty much flattened the mums, but it melted away on the same day. 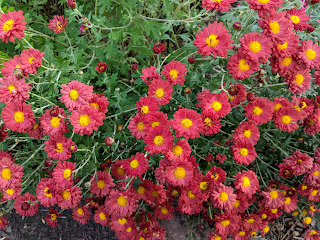 Jim has been fretting about planting the garlic, stymied by the muddy garden, but he is out there today making good progress and soon enough that chore will be finished and the straw mulch spread upon the bed.

We are processing the last of our tomatoes, which due to the cold weather have been wrapped in newsprint and ripening in the furnace room. Yesterday afternoon I canned eight quarts of rich, thick marinara and the house was fragrant with garlic and basil. 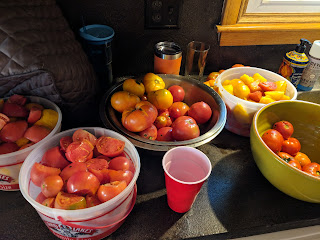 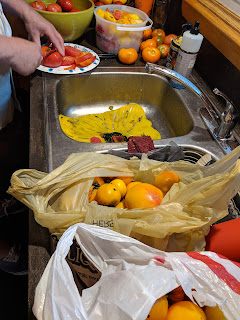 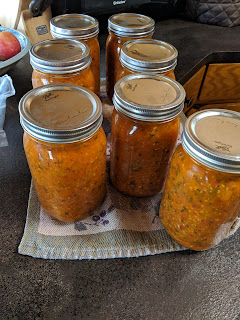 A winter's worth of firewood has been curing on the back deck all summer and I've filled the kindling box with the twigs that fall from the Red Oak tree. 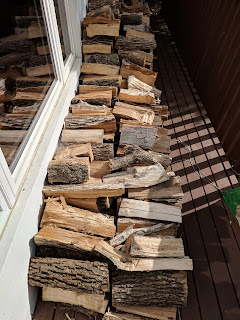 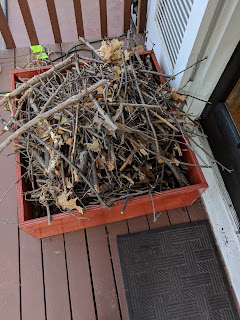 In the flower beds, I've built fences around some of the shrubs to prevent the rabbits from munching during the long winter months. 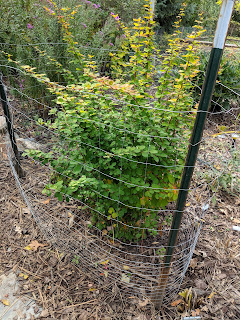 The freezer is full of fresh Suchy beef and the vegetables we've put up from our garden. The raspberry patch keeps producing in spite of the early cold weather and we savor each one, while also freezing some for winter pancakes and waffles. 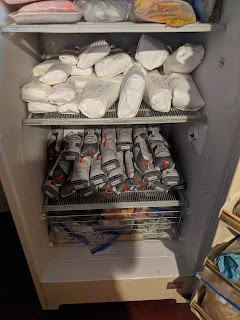 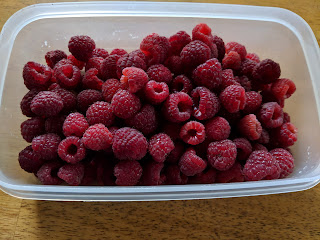 Overhead, the sandhill crane flocks are flying south, fast and high. From Words for Birds: A Lexicon of North American Birds with Biographical Notes, pg. 88-9:

"Crane is an English word derived from the bird's cry, which has its origins in the root for 'calling' or 'crying out.' At least two lines of development are recognized. One, through the Greek geranos, 'Crane,' to the Celtic garan, in which form it appears in Welsh, Cornish and Breton. Secondly, through the Northern European languages as trani, Icelandic; trance, Danish; trana, Swedish; and the Dutch kraany, as well as the German kranich. By 977 A.D. Old English had it as cran. Gruidae is the conventional form for the Latin grus, 'crane.'

Sandhill crane, Grus canadensis. canadensis. Latinism for 'of Canada.' It is only an accident that one or another of these two species is known as americana [Whooping crane] or canadensis, since each breeds in Northern Canada and migrates south in the winter.

Sandhill. The word is self-descriptive and refers to areas in which the species is seen. In the Middle West and Southeastern United States, a geographic feature is rolling hills of covered sand." 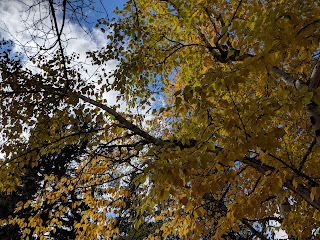 Time to savor crispy apples, clean leaves from gutters, and prepare for the upcoming winter's worth of indoor projects. 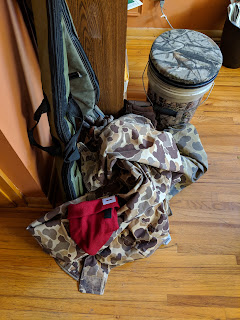 "I'm so glad I live in a world
where there are Octobers."
Anne of Green Gables by L.M. Montgomery 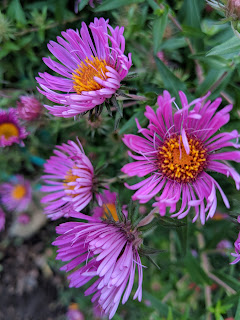 Posted by WildDakotaWoman TM at 12:11 PM No comments: