My younger brother (by 23 months), Thomas Crook, Senior Chief, Retired, United States Navy, my best friend all these many decades, is the very model of humility and dignity. Because of the deep trust between us, Thomas has allowed me to share the photographs taken at our father's burial this past summer, for my Veterans Day tribute to him, although he does not like to be in the spotlight. This is a deeply personal story, perhaps the most personal I've ever shared and it was paramount that Thomas agreed to its telling.

I've written a number of times about my Dad, but a review is in order: Dad was on Omaha Beach on D-Day and a few years ago, our friend, Bob, whose father-in-law had also been on the Normandy beaches, visited that hallowed ground in France, and when he returned to North Dakota, he brought with him the iconic photograph taken on D-Day by Robert Capa. Bob requested that my father sign the photographs before he had them framed and presented one to my father along with a vial of sand he had collected from Omaha Beach. This photograph was on the dining room wall at my father's home and then in his nursing home until he died, and it now is on my wall. As you can see from the photograph, my father wrote that he was there eight hours after the first wave. The courage of these soldiers and sailors is unimaginable. 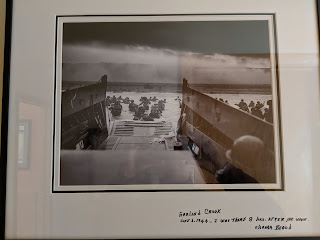 My brother, Thomas, who retired from the US Navy with great distinction, and continues to live in the Norfolk area, booked a flight to Bismarck as soon as we decided upon a date for the funeral, during an exceptionally challenging time due to the pandemic. When I called Thomas on Memorial Day to tell him of our father's passing, he made an extraordinary gesture. Thomas contacted the Normandy American Cemetery in Colleville-Sur-Mer, France, and arranged for an American flag to fly over the cemetery on June 25th, and subsequently be shipped to him in Virginia. Then he brought that very special honor flag with him to North Dakota for the funeral. 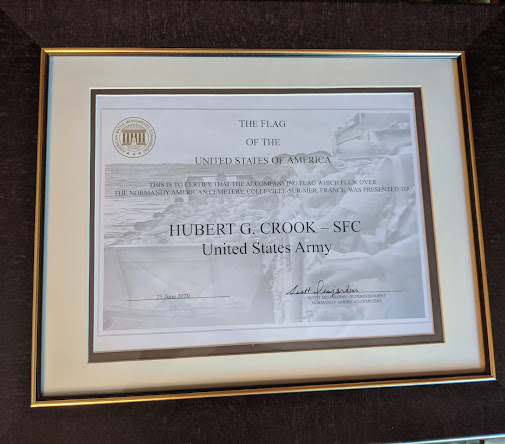 When we picked up Thomas from the airport, it was moving to know that he had this special flag with him, along with his Navy dress blues.

During the funeral, the memorial tributes highlighted that my father had done so much work to ensure that the oral histories of his fellow veterans would be preserved, and it wasn't until he had completed every single one that he agreed to complete his own. These oral histories are available at the ND State Historical Society Archives. Several family members spoke about my father's life and then, in a powerful moment that everyone in attendance will never forget, Thomas, in dress uniform, rose to his feet to speak in his firm voice: "It wasn't about him. It was never about him...it was for people of France, of Europe, and his buddies,...for us, for his neighbors, his family, his friends, ...it was for them....But today is about him." (Watch here, with Thomas's remarks at 44:25 minutes into the recording, and our Dad's obituary is here.)

Then it was time for us to drive to the peaceful hill south of Mandan for Dad's burial at the North Dakota Veterans Cemetery, where some of our friends were waiting to pay their respects. We filed into the chapel for the final tribute and I sat between my husband and Thomas. My brother Thomas supervised the Honor Guard who fired the final salute to my father. Before we began, he rehearsed the folding of that large flag with them in the entry, telling us later that the soldiers were a little intimidated by it as at 5 feet by 9 1/2 feet it was larger than the standard flag. At the end of the service, after the two young women soldiers brought that special Normandy flag to the front of the chapel, folded it, Thomas rose to his feet to receive the flag, and then he presented it to the family "...a symbol of our appreciation for your loved one's honorable and faithful service."

Together we walked outside to the gravesite. And then came perhaps the most poignant moment of the day. Thomas and my sisters and his widow and I each sprinkled a handful of that Normandy sand into the vault in the manner of a British burial, my father being of British ancestry. As my husband had said, my Dad in his life career in the Army had gotten lots of sand in his boots and the sand from France was a fitting gesture.

And this is a true statement: At that moment, while Thomas stood saluting our father's grave, I heard a Western Meadowlark sing its hauntingly beautiful song. I knew then it was time to leave my father there at ease, at peace, where he had hoped to be, a cemetery he had helped raise the funds to build all those years ago.

After that were but a few more precious days with my siblings during which we sorted through our father's things, 95 years of memories including his Army footlocker and memorabilia from numerous veterans organizations and reunions, and distributed keepsakes to grandchildren and Dad's remaining siblings. We toasted Dad with his favorite "Old Granddad" Kentucky bourbon. There is never enough time with Thomas when he is home and I gulped hard when I left him at the airport for his return to Virginia. Then I drove out to the University of Mary hillside to watch his airplane and to look west over the Missouri River to the North Dakota Veterans Cemetery just across.

This is the first Veterans Day of my life without my father. This photo below was taken last year when I attended the program at his nursing home. He and I are wearing poppy scarves I purchased earlier that fall at the Battle of Britain Memorial at Dover, England, a place I had been keen to visit because my Dad would have seen the White Cliffs during his World War II service, a place of stark beauty from which, on a clear day, one can see the coast of France. I stood there a very long time thinking of my 19-year-old father on that beach with all of those young men.

Today, Veterans Day 2020, I pay special tribute to my brother Thomas, who came from humble roots and has served his country with faithfulness, and distinction, and honor, and who bore my father to his resting place with great dignity. May you all have such a hero in your life as my brother. 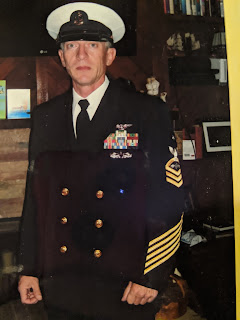 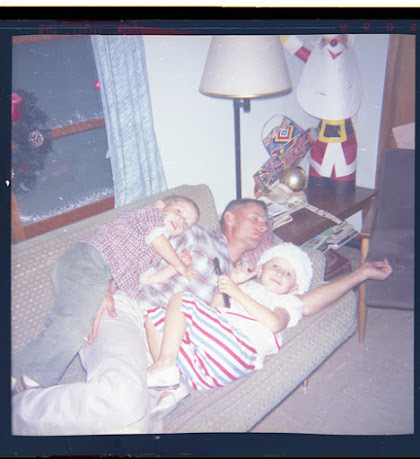