The communities of Bowman County, North Dakota hold a gathering at the Bowman High School every year, celebrating Veterans Day. This year, they chose to honor my father, Garland Crook, who is now 93. We traveled there Thursday. Sadly, he was not feeling strong enough to attend. He would have seen many of his buddies there. In fact, one even brought his grandson there from the Black Hills in the hopes that he would get to meet my father.

My husband and I have been to many Veterans Day programs, but I can say without reservation that this was the finest. The walls of the school were decorated with student art focused on veterans. All of the students attended, as do many members of the community, and the young students all listened so respectfully. Students send handwritten invitations to area veterans and served a delicious turkey dinner after the program to all the honored guests. 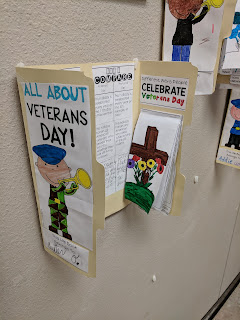 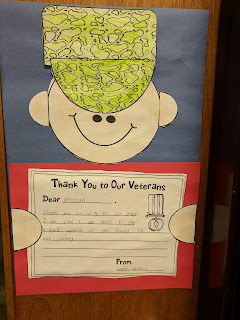 My sister and brother-in-law made the drive with us on a cold and sunny day and we visited with many old friends and neighbors who live in the surrounding area. 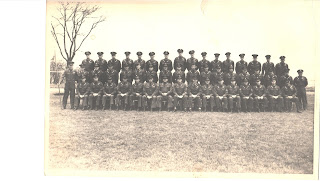 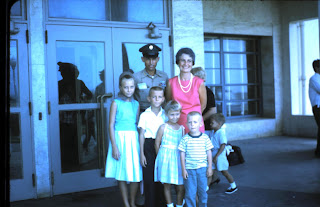 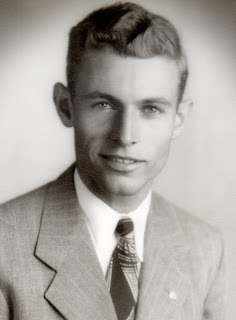 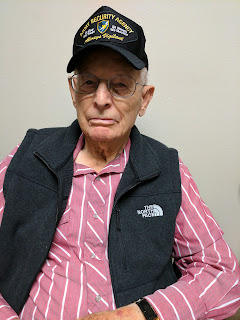 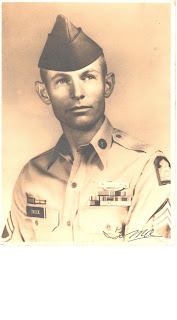 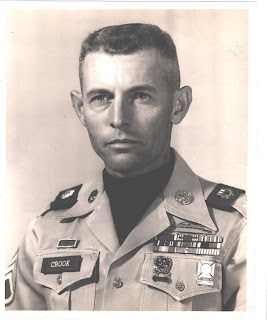 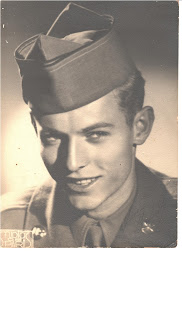 My father, pictured above on the right at a Bismarck Veterans Day Observance, held the following offices in veterans' service organizations: 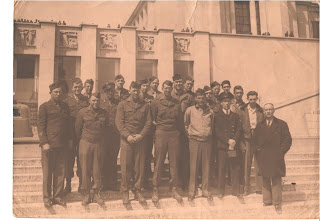 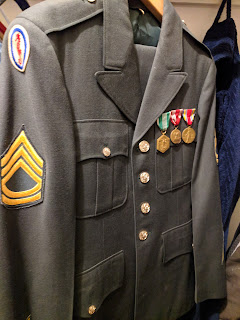 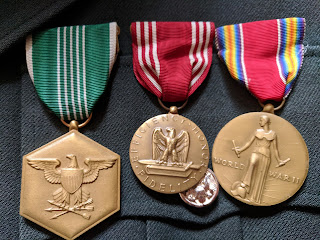 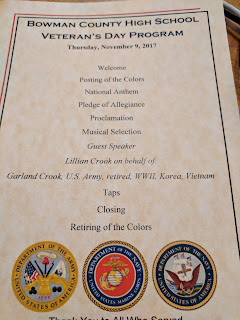 Below is the text of my speech and here is video shot by my husband (trained by the US Navy as a photographer and videographer-thank you!).

Bowman Public School and all, thank you ever so much. We so enjoyed the day and are very grateful that you honored our family hero at this special community event.

First of all, thank you to the community of Bowman and the School for honoring my father today on this occasion, in observance of Veterans Day.  It is my privilege to represent my father and my family and to give you a brief overview of his service to his country.

On the 6th of June, in 1944, the day of the landing of the Allied forces on the beaches of Normandy, France, one of the pivotal days of World War II, my father was just 19 years old, not much older than many of you in the audience.   Not so many months before that, he was a just a boy, growing up in Mississippi.  He helped his father in the fields and fished when he could. He learned to sing at the nearby Friendship Church and attended school at French Camp Academy, riding his bike or catching a ride home on weekends.  Sometimes his aunt and uncle would pick him up on their way to Kosciusko, the nearest city with a theater, for a rare night at the movies.  He knew the day he heard the news of the bombing of Pearl Harbor that he would soon answer the call of duty and serve his country and, not long after that, he enlisted in the US Army. He was so young that his mother had to sign off on his enlistment.  He took a train to the East Coast and, after boot camp, the ship the Queen Elizabeth (which was converted from luxury liner to troop transport ship), sailing to England. Bear in mind this is when the Atlantic Ocean was crawling with enemy submarines and the ship traveled for four days and night UNESCORTED. In England, he experienced the famous Blitz bombing.

In World War II, a few weeks after the landing in Normandy (yes, he was on the beach on that bloody day), he was wounded, somewhere in the hedgerows of rural France, and, after he recovered, he was assigned to drive for General Lee. His subsequent adventures included Christmas dinner in France with the Duke and Duchess of Windsor and attending the funeral of General Patton, in Germany, with General Lee, who was in charge of the arrangements.
After the war ended, he came home, completed high school and attended the University of Kentucky, but he returned to the Army to serve in the Korean Conflict. In the course of these years, this young man from Mississippi was in London, Paris, Berlin, and Seoul.

One of his many stories included the time when he and a buddy got off-track when driving a truck somewhere in Korea and realized their predicament when they saw that they were surrounded by Chinese and North Korean soldiers. Somehow they got back to safety and he came home again. His service in the Army continued through the Vietnam War and he retired as a Sergeant First Class after more than twenty years of service.  He was a drill sergeant and had various assignments included security services.  His military decorations include The Purple Heart and a Bronze Star with Oak Leaf Cluster.

I would like to call your attention to a program that aired on Prairie Public TV on Thursday night, a two-hour documentary called “Prairie Memories: the Vietnam War Years” which is interviews of North Dakotans' memories from that time.  You will learn much about fellow North Dakota veterans if you watch this. The interviews are slowly being added to the Digital Horizons website at http://www.digitalhorizonsonline.org/digital/collection/p16921coll14

As you will see in the printed program, after my father’s retirement, he was very active in many veterans’ service organizations, holding many offices, continuing to serve his country.  One of my vivid memories of my father is how he loved to pore over his copies of Popular Mechanics magazine.  A true Army man, he could build and fix most anything, talents that came in very handy when he was ranching in Slope County, north of Rhame, after his military retirement.  He also loved to garden and to camp.

Most of all, he loves to fish.  He really loves to fish. He has fished all over the United States and one of his happiest moments was when he received the ND Walleye Whopper Award. Needless to say, he got that fish mounted.
I want to also acknowledge today the service of other members of my immediate family: my older brother served in the US Army, my younger brother served a career in the US Navy, retiring as a Senior Chief, and my husband and brother-in-law (here today, please stand) were in the US Navy.  I guess you can see why we children were raised to always say “Yes Sir!” and “No Ma’am.”

To those of you young folks listening to this today, I urge you to talk to the veterans who are in your life and listen to their stories, acknowledge that you understand the sacrifices they made, all the times they missed holidays with their families, and the dangers they faced.  As you are making plans for your future, consider wearing the uniform of your country.

Without a doubt, my father is a true patriot and we as a family are very proud of him.  Thank you for recognizing his service.  I hope you find him as inspiring as we have.  He is truly an American hero. 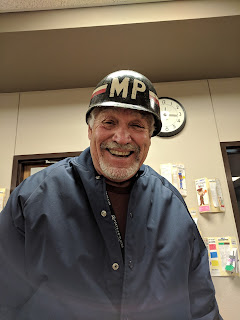 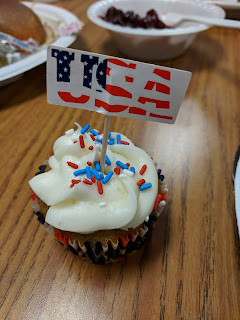 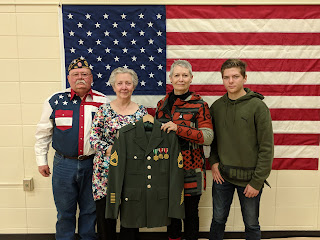 Posted by WildDakotaWoman TM at 10:49 PM