Beyond the Bedroom Wall

The year I was a sophomore in college, one of my mentors, my Lutheran pastor, was reading a novel. He told me I should read it, and so I did. I remember exactly where we were and what the car in which we were riding looked like. I paid attention, as I greatly respected this man.

The book was Beyond the Bedroom Wall, a novel by a North Dakotan, Larry Woiwode. 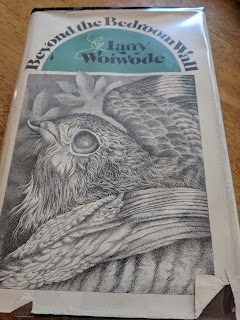 I had a full academic load and a part-time job, but I found the time to read the novel. Profoundly moved, my mentor asked me what in particular I liked about the book, and I told him that I felt the author had captured the protagonist's voice, a woman, exceptionally well.

Here is the first paragraph of the novel:

"Every night when I'm not able to sleep, when scrolls of words and formulas unfurl in my mind and faces of those I love, both living and dead, rise from the dark, accusing me of apathy, ambition, self-indulgence, neglect--all of their accusations just--and there's no hope of rest, I try again to retrace the street. It's an unpaved street and it's the color of my hand. It's made up mostly of the clayey gumbo from the flat and tilting farmland all around this village so small it can be seen through from all sides, and its ungraded surface is generally overrun with ruts that are slippery and water-filled in spring, ironlike in summer, furred in fall with frost as phosphorescent as mountain ridges on the moon's crust, and in winter buried beyond all thought except for any thought that clay or gravel or the booted feet of people crossing ice-covered snow above might have. It's the main street of Hyatt, North Dakota, and it's one block long. I lived in Hyatt from the time I was born until I was six and returned only once, at the age of eight, wearing a plaid jacket exactly like my brother's, too light for the weather, and ran up and down this street with changed friends, playing hike-and-seek between buildings that stand deserted, now that time has had its diminishing effects."

By the time I read this novel, I was a college English major and I was immersed in the glory of learning new things every day from all of my professors.  I recognized the places Woiwode wrote about as I, too, had grown up in rural North Dakota.

That there was a New York Times bestseller written by a North Dakotan was big news. Little did I imagine that one day I would become friends with the writer, well acquainted enough that I would recognize him when our paths cross in the Bismarck Menards parking lot.

At the time that Beyond the Bedroom Wall was published, he lived in New York City, but he now lives in the rural Hettinger County, near Mott, and teaches at Jamestown University, traveling back and forth each week.

Perhaps I should re-read the novel, with my hard-earned wisdom of years changing my perspective and appreciate it anew.

What is your Bedroom the Bedroom Wall memory?

The shelves in the library at Red Oak House are filled with Woiwode books and we attend his readings whenever we are able. We eagerly await his new writing, this author who captures the essence of this place so well that he was named the North Dakota Poet Laureate. Write on, Larry, and Godspeed. 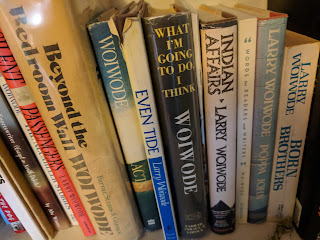 Posted by WildDakotaWoman TM at 11:39 AM