Jim and I attended the 49th Annual UND Writers Conference this week, where he was a presenter on a panel entitled "What's News? The State of Journalism in North Dakota and Beyond," convened by Chuck Haga of Grand Forks. 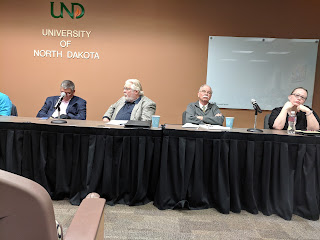 I seized the opportunity to do some research at UND's Chester Fritz Library, reading from dozens of reels of microfilm on a topic of interest to me. I also visited the Special Collections department, a treasure house of North Dakota information. 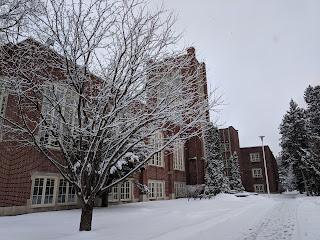 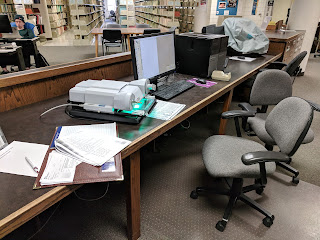 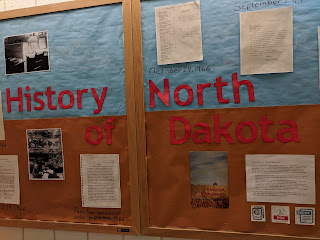 Here is a video of what Jim Fuglie and Mike Jacobs, longtime North Dakota journalists, had to say. While all of the panelists' thoughts were fascinating, my arms got tired, so I didn't film the entire 45 minutes of the program. Jim and Mike get the last word as far as this blog is concerned.
Posted by WildDakotaWoman at 11:22 AM No comments:

Quilting bee weekend with my sisters

We're not certain what constitutes sufficient numbers to be able to call a gathering such as the one I attended this past weekend a "bee," but I was invited by my older sister to a "quilting bee" so by gosh I'm going to call it a "bee." 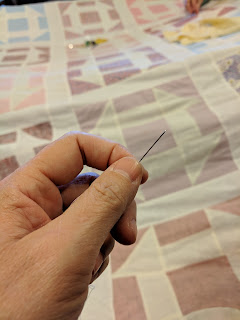 I was a member of this bee, held in the Bad Lands south of Medora, by the invitation of my elder sister. My younger sister and I drove over together. She asked me if I had ever done this, and confirmed that she had not. I asked her how old she, little sister, is, because this helped me determined how long it had been since I had last quilted. Little sister was a baby in a bassinet the last time that my mother put up the frame in our Slope County living room and we quilted with Mama Crook, my paternal grandmother. The bassinet was tucked under the quilt frame allowing us to keep an eye on her. Thus, for me, it had been more than 45 years since I had quilted. There was a great deal of laughter and self-poking of fun at lack of needle skills. The quilt we were working on was pieced about thirty years ago. There was plenty of becoming acquainted and sharing stories. The hospitality was very fine indeed, with much delicious food shared with those of us who had traveled from afar to "assist" (I hesitate greatly to describe the work I did with my needle "helping"). We each fell into our own rhythm as the day progressed. 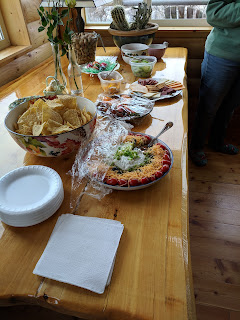 We also shared our memories of ancestors' quilting activities and the beautiful craftsmanship we have seen on display as well as in our personal collections of quilts. We talked of what bees would have been like in bygone days and of quilt auctions we've all attended as fundraisers. 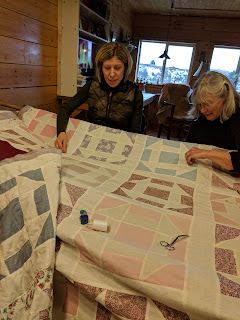 Then, it was time to put away the work for the day and celebrate St. Patrick's Day, dining on rich Irish stew and freshly baked soda bread. We compared pin pricks on fingers and sore muscles from a hunched-over day's work. 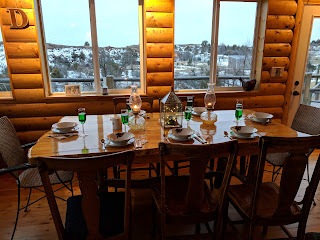 The weekend ended with a good night's sleep in the silence of the Bad Lands, followed by fellowship this morning at the Medora Lutheran Church, and . . . more food! 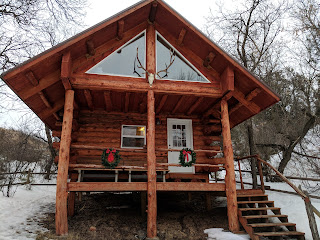 Life has surrounded me with good people, and the best two sisters a gal could wish for. 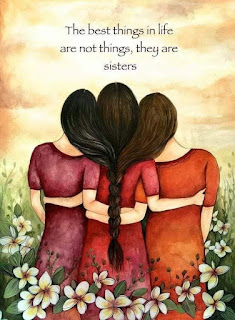 Posted by WildDakotaWoman at 12:34 PM No comments:

March 15 is "plant the tiny tomato seeds" day at Red Oak House. When I wandered into the kitchen this morning, Jim asked me, with great delight in his voice, if I knew what the significance of this day was. I had not yet had coffe and was stumped (I'll admit that I didn't try very hard).

This project is tedious joy for Jim, if I may use an oxymoron to describe this. You can see in the photo below that he has to use a tweezer. 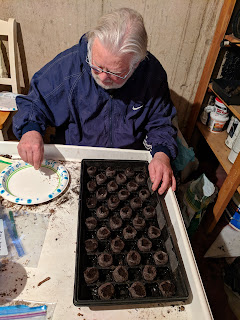 Yes, he saves his seeds from the previous harvest, as shown here. 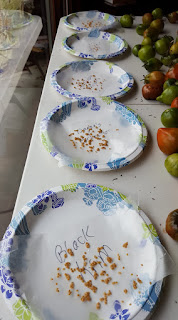 Yesterday he transplanted the pepper sprouts into small pots. Next week, we will celebrate the vernal equinox, the arrival of spring. We chose this date for our wedding date, after much thought. The days ahead will be busy with joyful tasks.

Spring and All by William Carlos Williams

By the road to the contagious hospital
under the surge of the blue
mottled clouds driven from the
northeast -- a cold wind. Beyond, the
waste of broad, muddy fields
brown with dried weeds, standing and fallen
patches of standing water
the scattering of tall trees
All along the road the reddish
purplish, forked, upstanding, twiggy
stuff of bushes and small trees
with dead, brown leaves under them
leafless vines --
Lifeless in appearance, sluggish
dazed spring approaches --
They enter the new world naked,
cold, uncertain of all
save that they enter. All about them
the cold, familiar wind --
Now the grass, tomorrow
the stiff curl of wildcarrot leaf
One by one objects are defined --
It quickens: clarity, outline of leaf
But now the stark dignity of
entrance -- Still, the profound change
has come upon them: rooted they
grip down and begin to awaken
Posted by WildDakotaWoman at 9:26 AM No comments:

How's this for timing? I finished this interesting new book, one of the many excellent books being produced by NDSU Press, just as the biggest winter storm of the season was upon us. 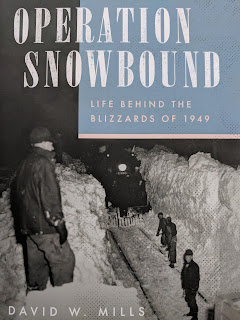 This is the story, as described in the subtitle, of the 1949 blizzards that nearly paralyzed a portion of the United States, specifically the northern plains and the inter-mountain west, including North Dakota. The writer and historian, David W. Mills, tells this vivid tale using a rich array of source material, dotting the story with vignettes of individuals who had to cope with the effects of these storms, and the many heroes who played their role in the response. The accompanying photographs enrich the text.

"By the end of January, the devastation was staggering. The western United States had suffered through one of the worst winters on record with at least another month to go. Roads blocked with mountains of snow prevented travel throughout Colorado, Montana, Nebraska, Nevada, North Dakota, South Dakota, Utah, and Wyoming. Snow isolated farms, ranches, or entire communities for weeks at a time. Livestock losses were staggering, but the extent of the catastrophe remained uncertain until the snows melted and the carnage lay bare." (pg. 211)

I learned a great deal about a chapter in North Dakota history about which I'd known almost nothing and I'm eager to share this book with my mother, who would have lived through this ordeal in Slope County, and to hear her personal stories. That is the magic of books and history, well told. This book falls into that niche and I tip my hat to the author and the folks at the NDSU Press.
Posted by WildDakotaWoman at 9:08 AM No comments:

A Toast to my "Wild" Girlfriends

I am blessed with several wonderful girlfriends, fellow travelers who love wild landscapes as much as I. Together, we have explored these places, on a regular occasion.

We are of a similar age and share between us a deep love and commitment to the Bad Lands. These are very smart and strong and brave women friends. My life is deeply enriched by their presence. Like many enduring friendships, we've seen highs and lows, standing by each other through the rollercoaster ride of life.

This photo was taken on our first wild adventure as a trio. The t-shirts are advertising White Butte, the high point of North Dakota. Although we've all been to the top, we didn't go there on this particular trip. On this weekend, we explored other Bad Lands places, some secret.


May you all be as blessed with friends as I.

A toast to my wild girlfriends, far away or nearby. Keep your feet on the ground and your boots muddy.


Posted by WildDakotaWoman at 9:49 AM No comments: