A Thanksgiving Meditation: Things I Love

A Thanksgiving Meditation: Things I Love

(editorial note: I started this about two months ago, but almost didn't post when I saw Terry Dullum's similar blog -- then thought "nah, I'll go ahead")

Posted by WildDakotaWoman TM at 6:34 AM No comments:

This is a significantly revised version of my original blog posted on 11/20/2019 with the addition of details I've located since that date as well as updates on the 11/21/2019 Unicorn showers.

Although the annual Leonids meteor showers have come and gone, the news about a potential "rich burst" of shooting stars from the Unicorn meteor showers has me thinking back to two remarkable nights in my life during Novembers long past. 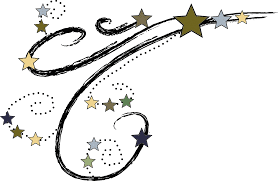 I follow the website "Earth & Sky" and here is something they have to say about the Unicorn meteors: "you might catch a rich burst of meteors from the constellation Monoceros the Unicorn. At its peak, it was said the showers 'could' produce a burst of 100 meteors in just 15 minutes." You can read more about it at "Earth & Sky" as well as this article on the CNN website including the times to watch. However, the 2019 Unicorn showers were a bust I can say, from both my observations  -- we saw two -- and this "Earth and Sky" post which says they were "elusive."

Unlike the more recent showers, on an extraordinary night in November 2001, the Leonid meteor showers were exceptional, just as predicted in the media. That night, I made plans with a friend to drive to a dark place near Richardton, ND, where we bundled up, positioned our lawn chairs for the display, scrambled into sleeping bags, and sipped on hot tea from a thermos. While the night was somewhat cloudy, the show was still spectacular, with massive explosions of green and purple near the northern horizon, so large one could imagine the sound. Many viewers documented that night and some accounts and photos are widely available including here. Interesting historical accounts of past Leonids are in this story from The Washington Post, including fascinating details of an 1833 meteor storm (more about that later).

About the time of the 2001 Leonids, I began work on a rewarding project as part of my responsibilities as library director at Dickinson State University, a collaboration with the Department of Language and Literature to bring contemporary authors to campus. The co-coordinator and my partner in this venture, Dr. David Solheim, came up with the program's name: "Heart River Writers' Circle." Solheim made the arrangements with the authors (he had been bringing authors and poets to campus for many years by then) and I handled the other details, mostly administrative and public relations, as well as the follow-up book discussions held in the Library and open to anyone who wished to attend. He and I were somewhat stunned when the president (and his wife, who was very enthusiastic about the project) told us to "think big." We stood in the hallway for a time looking at each other and then plunged ahead on a literary project that heightened attention to writers and survives to this day, long after our retirement.

Thus it was that our second visiting writer for the series was Pulitzer Prize winner author N. Scott Momaday. His reading was a big splash, the auditorium packed including with tribal college students who were bused in for the evening and breakfast with the author the next morning. But first, I had the honor of dining with Momaday at the President's house before the reading where Solheim and I were allowed to invite a few of our own guests. It was an intimate gathering and I invited the man I was dating (who became my husband, Jim) and friends Debi and Ken Rogers (Ken had graciously agreed to lead a future book discussion for "In the Bear's House").

As we gathered that night for supper, Momaday, who is Kiowa himself, told us a story in his beautiful, sonorous voice of the Kiowa people being awakened on a winter night by a massive meteor shower many centuries ago. This was the 1833 Leonids, he said. He told us the story from the Kiowas Calendar History, described here in the Calendar history of the Kiowa Indians by James Mooney, available at Gutenberg.org:

D'ä´-p'é'gyä-de Sai, "Winter that the stars fell." This winter takes its name from the memorable meteoric display which occurred shortly before daylight on the morning of November 13, 1833. It was observed throughout North America, and created great excitement among the plains tribes, as well as among a large part of our own population; the event is still used as a chronologic starting point by the old people of the various tribes. It is pictorially represented on most of the Dakota calendars discussed by Mallery in his valuable work on the Picture Writing of the American Indians. Set-t'an was born in the preceding summer, and the small figure of a child over the winter bar indicates that this is his first winter or year; the stars above his head represent the meteors.

Fig. 64—Winter 1833—34—The stars fell.
The Kiowa say it occurred in the winter season, when they were camped on a small tributary of Elm fork of Red river, within the present Greer county, Oklahoma. The whole camp was asleep, when they were wakened by a sudden light; running out from the tipis, they found the night as bright as day, with myriads of meteors darting about in the sky. The parents aroused the children, saying, "Get up, get up, there is something awful (zédălbe) going on!" They had never before known such an occurrence, and regarded it as something ominous or dangerous, and sat watching it with dread and apprehension until daylight.


After he told us this story, many of us shared our memories of watching the 2001 Leonids.

Momaday is also on my mind because the PBS series "American Masters" aired the splendid documentary "Words From A Bear" this week -- a film I've been waiting to see. (We narrowly missed its screening last winter at the Sundance Film Festival when we passed through one night off!) From the film's website: "American Masters examines the enigmatic life and mind of National Medal of Arts-winner Navarro Scott Momaday, the Kiowa novelist, short-story writer, essayist and poet, in the Season 33 finale." The film is streaming now; you can read more about the film here.

For the Heart River Writers' Circle events, I prepared bookmarks to be given out cleverly promoting both the author's upcoming reading and the later book discussions. I have many of those bookmarks to this day, tucked into the books I would purchase for my personal collection. After the readings, the authors signed their books at a reception, thus it is we have many signed books here at Red Oak House. 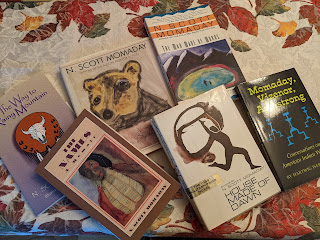 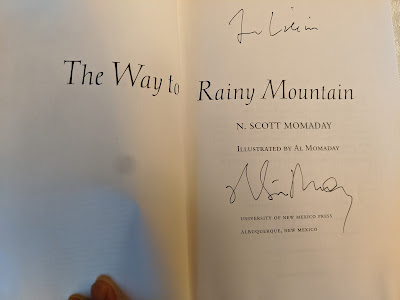 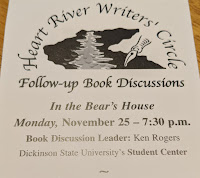 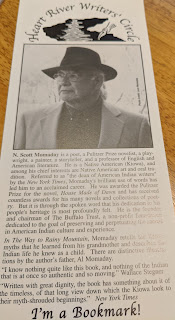 Someone snapped a photo of Solheim and me with Momaday that night, but, sadly, I don't have that photo. I do have the vivid memories though, just as burned into my synapses as that night I watched the Leonids, or the times I watched the Halley's and Hale-Bopp comets, or the night my daughter and I slept out on a hay bale stack to watch the Perseid meteor showers.

Do pause some night in the future and take in meteor showers as well as the stupendous Momaday film, for moments to fill your life with awe.

Is There Any Doubt I'm a Cartographic Geek? 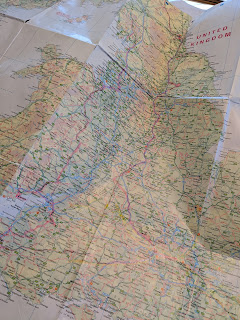 In Ireland, I only visited Dublin, also the English name of the county, but in Gaelic is Contae Bhaile Átha Cliath

I've already begun a list of destinations for my return to the United Kingdom and Ireland! Meanwhile, I've got some scones to bake, testing a recipe from the BBC. And, yes, I binge-watched season 3 of "The Crown" already.


Posted by WildDakotaWoman TM at 1:11 PM No comments:

November is our tenth anniversary at Red Oak House and the longest I've lived in one place in my lifetime. The explanation for my peripatetic life is, in part, that I was an Army brat. Looking back, I think that my heart was seeking the perfect match for my home and didn't find it until we bought Red Oak House. I know that the ten-year record does not hold for my husband because he grew up in a small southwest North Dakota town, in one place for 15 years. Yet, as an adult, he has also been fairly restless. (To be fair, I lived in Dickinson for more than thirty years, but in many different abodes.)

I used to say that I must live where I could smell sagebrush, and for much of my life I did, but now I revel in living where I see the Missouri River every day, content in the knowledge that my beloved Little Missouri River, its hauntingly beautiful tributary, flows by me each day mingled within the waters of the big river. We drink some of the cleanest water in the world and I am grateful each time I turn on a tap at Red Oak House.

Because our house was vacant at the time a decade ago, the seller allowed us to start painting before we actually closed on the sale in mid-November. By the time the movers arrived with our stuff that had been in storage in South Heart (of all places), it was a blustery day like today. 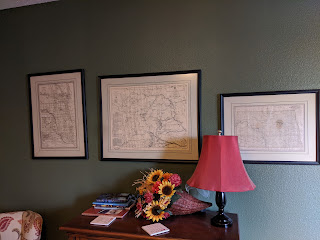 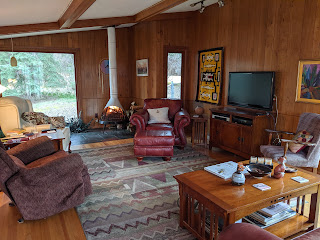 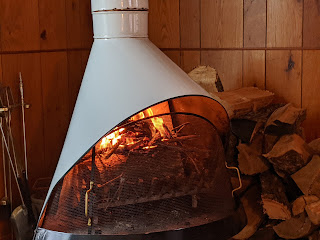 In the intervening years, we've sunk lots more sweat equity into this house, to not mention money. We transformed a huge plot of grass into perennial beds and a vegetable garden and raspberry patch. We've nurtured the existing trees, most importantly the ND Champion Red Oak, and planted a few more, including a small grove of quaking aspen and a thriving crab apple. We hauled in hundreds of rocks and several boulders and planted thousands of perennials. We built a website to boot. 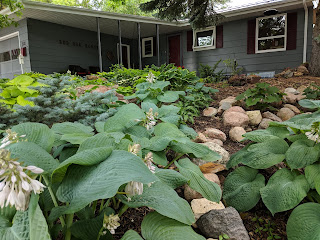 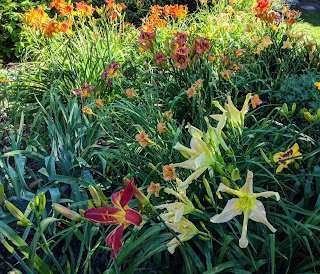 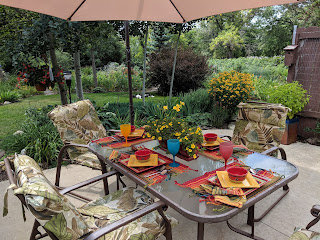 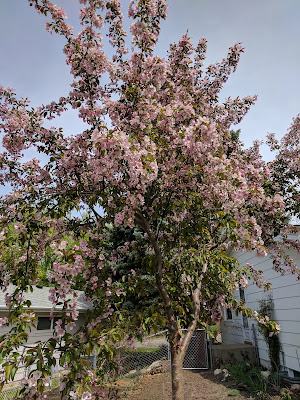 We replaced most of the original windows and battled a persistently leaky roof until we broke down last spring to lay down some serious cash on a gorgeous metal roof. Summer before last we had most of the wood floors refinished. Last summer I painted the exterior, a huge job for which I am proud I did on my own. We are hopeful the big-ticket items are behind us now and we can spend more on travel. 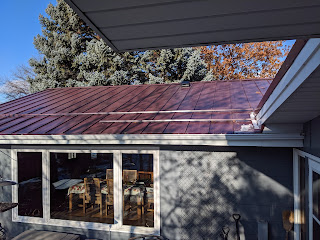 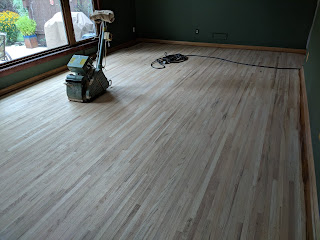 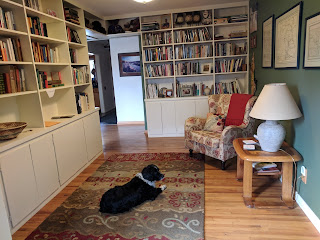 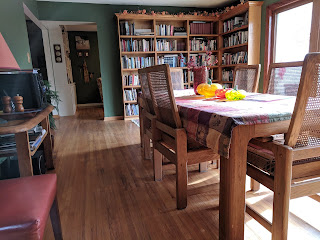 But for now, we tuck in for a long winter, catching up on projects in our respective offices (mine is in the kitchen where I write bathed in light from the windows all around, Jim's is more cave-like). In the evenings, we relax in our living room, watching TV and reading books.

May you all find the home of your heart.


Posted by WildDakotaWoman TM at 1:31 PM No comments: