A State Champion Tree--In Our Yard!

A State Champion Tree—In Our Yard! 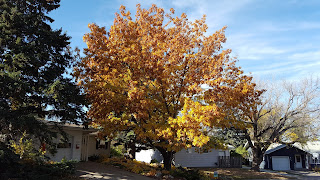 Hello from Lillian AND Jim. We sat down this week and wrote about one of the coolest things that have happened to us in a long time, and we’re posting it on both our blogs—Wild Dakota Woman and The Prairie Blog. We hope you enjoy reading this as much as we enjoyed writing it.

On summer evenings in the early 1970s, you could find Birgit Smeenk in her front yard with a garden hose, pouring water onto a spindly little oak tree she had stuck into the ground in 1976 in hopes of one day having shade for the front of her house at 920 Arthur Drive in Bismarck.

It takes a long time for an oak tree planted out here on the prairie to provide shade, even with daily waterings. Birgit’s daughter, Jennifer, watched her mother water that tree every day. “For a few years, it just didn’t do anything,” Jennifer told us on the phone from her home in Washington state the other day. “Then one year it just took off.”

Birgit’s constant attention worked. She didn’t live to see it, but today, more than 40 years later, that little stick is now North Dakota’s State Champion Red Oak Tree—the largest Red Oak in the state. So says the North Dakota Forest Service.
We bought that house at 920 Arthur Drive in Bismarck in late October of 2009, becoming the home’s third owners, and we moved in a few weeks later, so while we took notice of that big old bare-branched tree in the front yard as winter approached, we didn’t give it a lot of thought until the next spring, when it started to leaf out and we saw the familiar shape of oak leaves.

Neither of us had ever owned (or been owned by) an oak tree that big before, and we inquired of Tim Kingstad, from whom we bought the home, about the tree. Tim, the home’s second owner, told us it was a Red Oak (Quercus Rubra), and that the Bismarck City Forester said it was the only mature Red Oak in Bismarck.

There are a lot of other trees in our yard, probably 10 varieties. The Smeenks and Kingstads had been pretty attentive to trees, especially when the kids brought home seedlings on Arbor Day each spring. Some of the evergreens, planted early in the Smeenks’ time here, in the early 1960s, were taller than the oak, but none as spectacular, as we watched it through that first full year of seasons, from bare branches to green buds, to big green leaves, then yellow, then reddish brown, holding its leaves to be the last tree to go bare in late fall.

Our longest-lived neighbors, both in time on earth and time on Arthur Drive, Dave and Myrna Blackstead, who live across the street, have watched that tree grow all of its life. Myrna thinks it was transplanted by Pieter and Birgit Smeenk from a lake cabin the Smeenks frequented in Minnesota, probably in the late 1960s.

Myrna recalls this was their second try at an oak tree, after the Smeenk boys accidentally broke off the first one, much to their mother’s dismay. The boys’ older sister, Jennifer, isn’t sure. She thinks maybe her parents bought it somewhere. She vividly recalls her mother out there with that hose every night, though.

Pieter and Birgit Smeenk were immigrants, he from the Netherlands, she from Denmark (we believe that occasional flashes of bad karma which erupt in our now mostly-Norwegian household from time to time, are the result of too many years of Danish presence—nothing personal, just institutional).

The Smeenks dedicated their lives to the children of Bismarck. Birgit was a physical therapist and worked with BECEP, the program for pre-school children. Pieter was a much loved Bismarck pediatrician, and finished his career as Medical Director for North Dakota Crippled Children’s Services, serving in that job past his 80th birthday. To this day, frequently when we mention to someone that Dr. Smeenk owned our house at one time, the response is “Oh, my, he was my doctor when I was little. I loved him.”

Dr. Smeenk died in 2000, at age 82, his wife in 2014, at age 85. Their children have scattered. None live in Bismarck. Upon their parents’ death, they composed beautiful obituaries.

Of their father:
He received three things in life that are of basic importance:
Someone to love
Something to do
Something to look forward to
And he was thankful.

And of their mother:
She knew herself to be a child of God and lived her life with the joy and radiance which this awareness gives. She plucked thistles where she saw them, and planted flowers where she thought they might grow.
Grace was in all her steps
Heaven in her eye
In every gesture dignity and love.

We know Birgit loved that tree, and we’ve taken good care of it. A couple years ago, we started noticing in the mornings some sap on the Jeep, which we park under the tree. About the same time, Myrna stopped by the house one day and said she’d been watching our tree from her perspective across the street. “I’m a little worried about your oak tree. It looks a little peaked.”

She was right. There were a few small dead branches, and the leaves weren’t as thick as they had been the year before. We called the City Forester and the Extension Service for advice. We were told we needed to treat it with a special chemical we could buy at Runnings.

Well, we weren’t very excited about that—we’ve taken great pains to build up an organic yard, and Lillian’s hundreds of hostas and daylilies, and Jim’s prolific vegetable garden, are a testament to our success at that. First, we tried a release of a huge number of ladybugs to go after the aphids, but that didn't take, as these critters disappeared within a day.

But this tree was important, so early one summer morning Jim drove down to Runnings and snuck into the store before anyone else got there so he wouldn’t be seen, and bought a couple of those big blue bottles of Bayer Crop Science chemicals and came home and held his nose and mixed it up and poured it around the base of the tree, being careful not to spill on the hostas.

Well, as much as we hate to say it, let’s hear it for modern science. The roots of that big old oak tree sucked up that chemical, and sent it shooting up the tree, and killed all those little aphids that had been eating leaves and spitting all over the Jeep, and one day Myrna came over and said “Well, whatever you did to your tree, it worked!”

The tree and the house have become inseparable—it’s not possible to imagine one without the other. To cement that bond, we’ve named our house “Red Oak House,” and we use that name on our fledgling business cards and our website (redoakhouse.com), which doesn’t really have anything on it yet except a bunch of photos and links to our blogs: theprairieblog.areavoices.com, and wilddakotawoman.blogspot.com. There’ll be more one day. We have time.

We learned of the North Dakota State Champion Tree Registry a few years ago and wondered how our giant Red Oak measured up. So this fall we went out and measured it according to the specifications listed by the Forest Service on their website, and sent in an application. Within days, the Forest Service responded, and sent a technician to verify our measurements—a fellow named Joel Nichols who, we said, has the best job in North Dakota. He agreed. 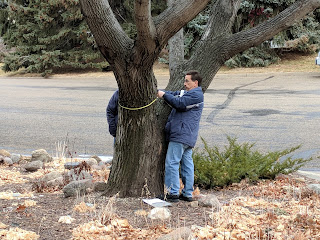 A couple weeks later we received a letter in the mail from Glenda Fauske, Coordinator of Information and Education with the Forest Service (the second best job in North Dakota) that started “Dear Jim and Lillian, I’m very pleased to announce your red oak (Quercus rubra) at 920 Arthur Drive in Bismarck is the new first place champion red oak!” (Here is the list for the entire state.)

Along with the letter was a certificate for framing and a news release, which has generated interest from the Bismarck media. We’ll likely be in the paper next week. We’re not sure how we’ll handle the fame. We’re also not quite sure how our neighbors will like the steady stream of onlookers and gawkers on our quiet little street, which has an average daily traffic count of 12. 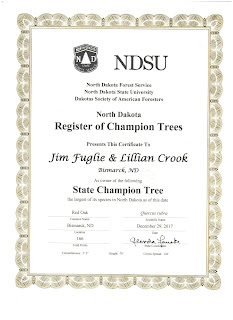 But what the heck, if you’re interested in seeing the largest Red Oak in the state, come on over. Arthur Drive is one of those little streets off Ward Road that doesn’t go anywhere except to the houses on that street. We tell people that if somebody hits a really bad hook off the No. 6 tee box at the Tom O’Leary Golf Course, their ball could end up in our yard.

But wait until June. Our oak is the last tree to leaf out on the street (oaks are just that way) but the wait is worth it. If you want to stop and visit and examine the tree up close, bring wine. And we’ll toast Birgit and Pieter Smeenk for planting that tree. And Dave and Myrna Blackstead for keeping a close eye on that tree all these years.

Here is a link to the Bismarck Tribune story on the tree.


Posted by WildDakotaWoman at 8:38 PM