I have two new British friends, thanks to the magic of books (and Twitter). One is the writer, Robert Macfarlane, and the other is the artist Jackie Morris. 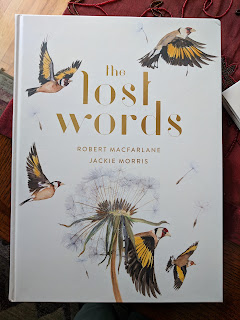 My friend, Ken, and I have a mutual appreciation of all of Macfarlane's books. Macfarlane's Twitter account is a delight as is his Word of the Day, from which I learn something daily, traveling in my mind to Europe on a regular basis. (Someday, I will go!) His books are bestsellers and have won many prizes. Macfarlane is a Cambridge professor and a walker, a collector of words. How lucky are his students? 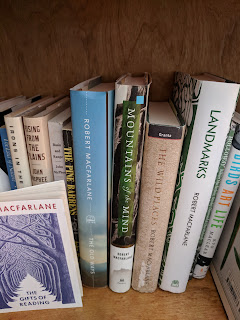 It was through the gorgeous book The Lost Words that I learned about the artistry of Jackie Morris. "With acrostic spell-poems by award-winning writer Robert Macfarlane and hand-painted illustration by Jackie Morris, this enchanting book captures the irreplaceable magic of language and nature for all ages." They "have made a thing of astonishing beauty." Alex Preston, Observer


Giddy with anticipation, I tore into a package I received in the mail yesterday from Great Britain. Inside was an exceptional children's picture book by this extraordinary artist, The Ice Bear, a signed copy. The Ice Bear is a moving tale of a raven, a boy, and polar bears. In this article from The Guardian, Morris tells about the creation of the book. 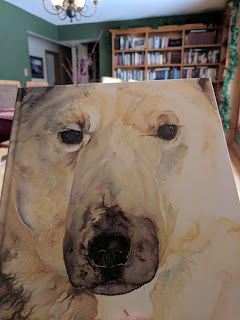 The Ice Bear is now on our coffee table, next to Terry Tempest Williams' The Secret Language of Snow. 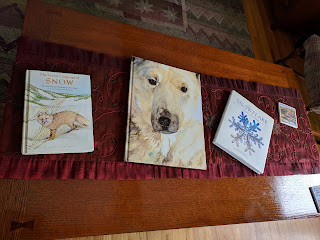 If you Google either of these two talented folks, you will find many articles and interviews of interest. I particularly enjoyed his BBC interviews found here.

Yes, indeed, this wild prairie woman is an Anglophile. And my lifelong love of children's literature is again nourished.
Posted by WildDakotaWoman TM at 10:52 AM