A Writing Retreat at Annunciation Monastery

"Life's pulse is gained in the hollows, the intervals between events....you must discern these spaces. This requires leisure, the chance to sit and contemplate, and the opportunity to respond to inner urgings.

If you can find a place to retreat, you can make a life where Tao will flood into you. Out in the woods, or in the mountains, or even in small villages where times are slow paced and the people sensitive to nature, there is the possibility of knowing the deep and the profound. Only when you have the time to accumulate an unshakable belief and faith can you glimpse the Tao in which there is restfulness and a natural sense of what is right." 365 Tao: Daily Meditations (pg. 142)

This past week I was immeasurably blessed by a personal retreat of my own devising at the Annunciation Monastery, on the southern edge of the campus of the University of Mary. 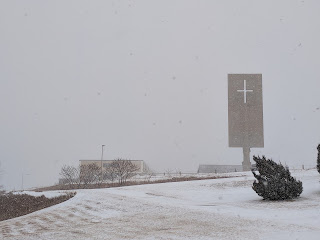 This place is filled with the presence of the holy and the sisters here are most assuredly living out the Benedictine value of hospitality. 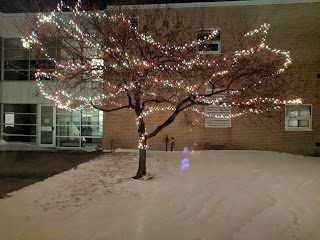 I found space in which to read and to write. They provided me with a silent room and any meals I cared to attend, in the sun-drenched dining room. Every single one of the sisters was kindness personified: gracious, kind, funny, and interesting. The institutional memory here leaves me awestruck. 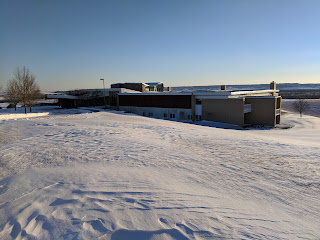 Several of the sisters have been here since the Monastery moved from St. Alexius in downtown Bismarck, relocating to what is now the Benedictine Center at the University, the first building here. In later years, the new monastery was built and they moved there. One sister told me that there were only dirt roads here and people thought they were crazy to move so far away from Bismarck. 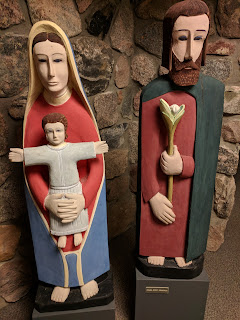 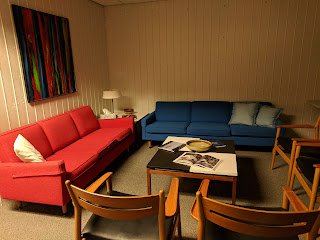 Lay people are often confused that a place where nuns live is called a "monastery," as they tend to associate this word with monks and men. The definition that I find on the internet is a "house for persons under religious vows" and, yes, mostly "men". Here is an article on that topic if you care to delve deeper.

The renowned architect Marcel Breuer was engaged to design the first building, what he later called his "gem of the prairie." He designed the (now) Benedictine Center, a gorgeous building, the walls constructed from the area's native rock, with inspiring and open spaces and sightlines everywhere. Sister Gemma remembers Breuer well and speaks with great reverence about the stonemasons who built the building, lamenting that it has become so difficult to find someone who will do this sort of labor. 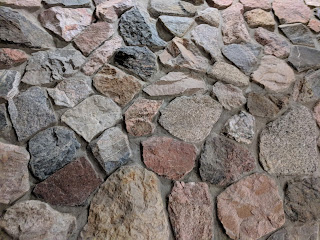 Some years ago, my friend Paul (born and raised in Bowman, ND) was visiting his father in Bismarck and I took him canoeing on the Missouri River. I'll never forget his expression of shock as we came around a bend in the river and I pointed out to him the University of Mary buildings on the bluffs above us and told him that Breuer had designed the first building. He knew about Breuer but had no idea that such a man had designed this building and in Paul's childhood home state. After we had taken the canoe out of the water and secured it to the Jeep, we drove up to the Benedictine Center and walked around. He took dozens of photographs and was in awe of the space.

Breuer insisted that no trees be planted around the building. Sister Gemma said that he would come to the site and just sit quietly on the prairie to get a feel of the landscape. To this day, architectural students come to the campus to study these buildings and future leaders have been very careful to design new campus buildings to incorporate elements of Breuer's original design, including the native stone. 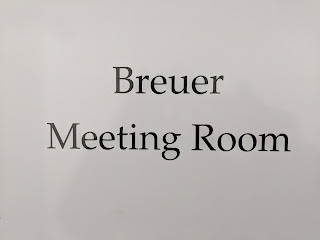 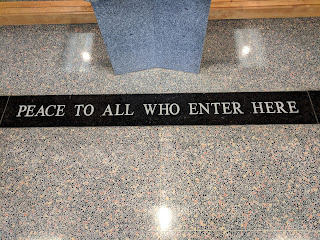 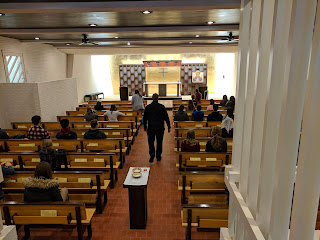 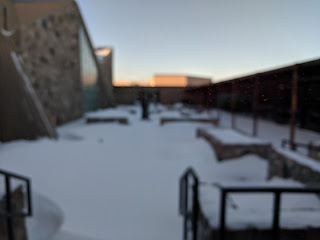 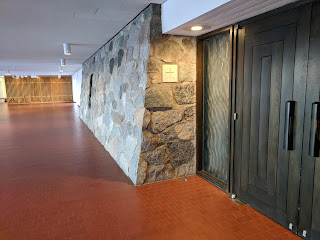 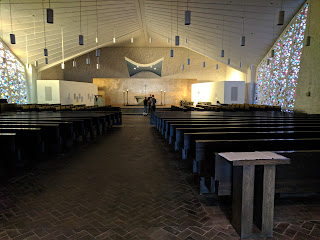 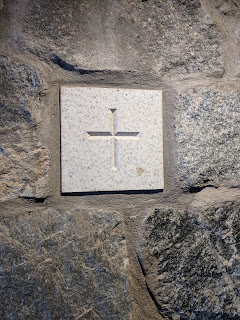 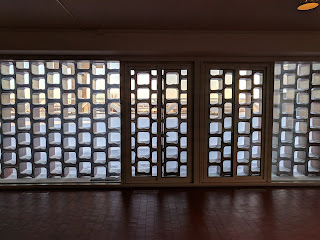 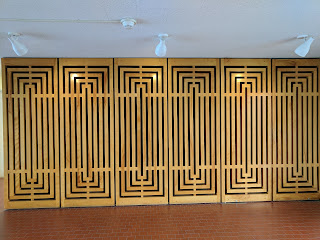 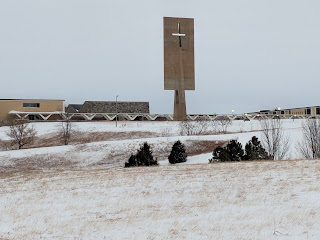 Each day while I was there, I luxuriated in the quiet with no distractions of dog, and cooking, and cleaning, and such. In the first two days, I went to town for my yoga class and for some research at local libraries, as well as one personal appointment I could not reschedule. Thereafter, I canceled every temptation on my personal calendar and just stayed put. This was a luxury I was unwilling to squander. 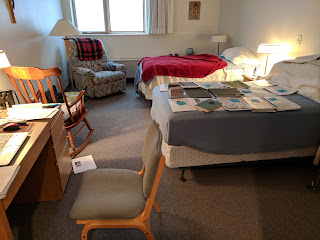 The only bird I saw this week was one lone bald eagle, which flew overhead as I drove up the hill to the campus.

A storm and bitter cold blew in on Wednesday, just as forecasted, and, although I had planned to perhaps do some cross-country skiing here on the open prairie, I didn't even budge, except for a couple of walks in the biting cold along the river bluffs (I checked out the beautiful library nearby) and to poke my head out the door late at night to look at the stars. Orion shone there above, along with Gemini and the Pleiades. I looked into the valley of the mighty Missouri River whenever I had a chance. 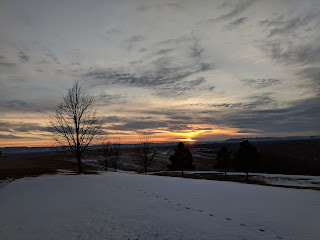 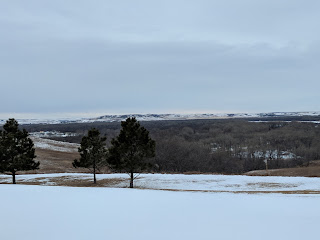 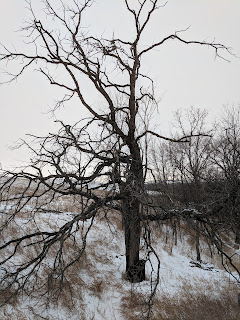 Mostly, it was me, with an explosion of papers around my room, and my laptop. I limited my social media time. I went to evening prayer each day. I had coffee and a granola bar in my room in the mornings, only emerging for the mid-day meal. After lunch, I read the Bismarck Tribune in the Monastery library. When I came down with a cold early in the week, Jim and Chelsea brought out a humidifier and got a short tour. Shortest duration of a head cold I've ever had. Hmmmmm.......

Every day there was freshly baked bread or buns, along with a wide variety of delicious hot food.

This morning at mass, it came to me that it was interesting that I would begin my retreat on the Epiphany, and prepare to leave this afternoon on the first Sunday of Ordinary Time, returning to my ordinary life, refreshed and renewed, with a big chunk of the first draft of a manuscript written.

I arrived at my warm home to find my husband was making homemade chicken noodle soup in his new crockpot, complete with his homemade noodles. The Springer Spaniel won't leave my side. I made many new friends this week, wonderful nurturing women who I will visit again and again. I was am very blessed. 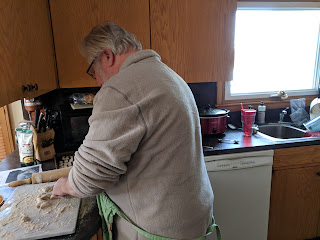 "...imagine! imagine!
the wild and wondrous
journeys
still to be ours."
Mary Oliver
Posted by WildDakotaWoman TM at 1:00 PM