If there was a geography bee at Edgewood Vista in Mandan, Marian Crook would probably win.  It’s not that she just reads a lot, which she does. And having chased a career military husband around the world adds to her advantage. But a big addition to what she knows about the world is jigsaw puzzles.

You see, jigsaw puzzles are often pictures of places, and Marian has put together hundreds, maybe thousands, of them. And each time, she learns something about the place in the picture she’s just completed. 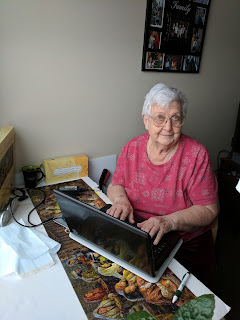 Marian Crook is my mother and a retired nurse.  She grew up on the family farm in Slope County, North Dakota in the Bad Lands of the Little Missouri River, the youngest of three sisters, and, as she describes it, she was “her father’s son,” working alongside him in the fields as much as time permitted when she wasn’t going to school. 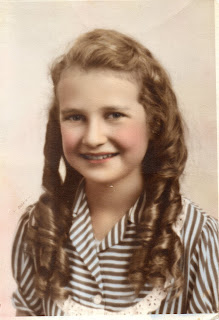 Those long days on the tractor and in the grain truck gave her plenty of time to dream about faraway places.  And, like a lot of farm kids growing up during the Great Depression, she learned about responsibility and independence at a pretty young age. She spent many hours by herself on the Slope County prairie, herding sheep. In spite of this, she and her friend Helen Brown (shown in the two photographs below) managed to have lots of fun. They remained close until Helen's death a few years ago. 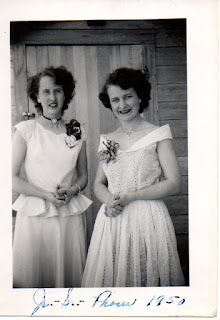 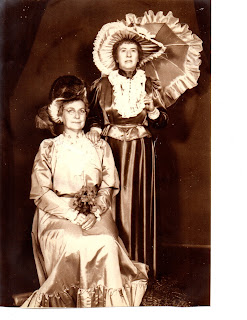 She also played basketball at Rhame High School. To this day, she tells great stories of her school days and the good teachers she had there. 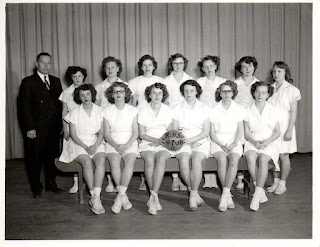 When she became a military wife, with a handful of kids to look after while her husband was deployed both overseas and in this country during the Korean and Vietnam conflicts, she wasn’t intimidated by the challenge of getting ready for the next move, sometimes after her Army husband had gone on ahead to his next post to line up housing for his growing family. And she always looked forward to the possibility of seeing some of those places she had dreamt about as a girl. Like crossing the Pacific Ocean.

Many years after those daydreams on the tractor, after flying from Billings, MT to San Francisco with four young children (one of those was me), she herded us onto a modified Troop Ship headed for Okinawa in order to rejoin her then-husband at his US Army assignment on that island so very far from the United States.
Sea-sickness plagued us all on that “cruise ship.” To prepare her children for their time on the island she told us “remember this is their country,” and she got thoroughly acquainted with the culture and history of the island with her new friends there. She let her children roam when they were not in the military schools or in a boat exploring nearby uninhabited islands with other military friends. To this day she has kept her Japanese skills sharp and can immediately tell you what her street address was in Okinawa – or any of her addresses around the world, for that matter. 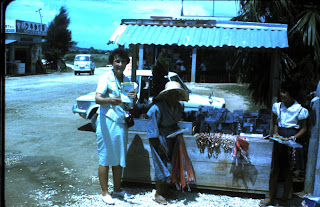 Marian loves the seashore and the mountains and birds, and can now be found hatching adventures with her new friends at Edgewood Vista Mandan when she’s not reading books or newspapers, or baking krumkake, or organizing a pinochle or cribbage game with her neighbors, or scheming up a trip to The Owl Used Bookstore. Today, for her birthday, Chelsea and I took her to The Owl. 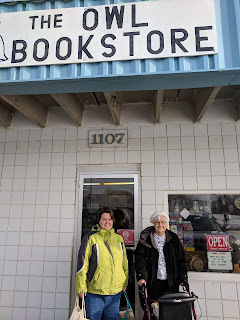 Her apartment is easy to identify because she has a lifelong love of lighthouses – born perhaps from the time she lived on the west coast near Seattle in her later teenage years. Here she is shown with her youngest daughter. 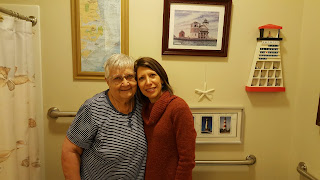 While living at her husband’s duty station at Fort Bliss, Texas, she trained as an LPN and worked while her children were at the neighborhood schools.  Later, as an older-than-average student after her marriage ended, she returned to college with her youngest child in tow and graduated with her Bachelor’s Degree in Nursing from Dickinson State University. Following that, her career took her to Grand Forks where she worked at then-United Hospital until her retirement from that career just before the big flood of 1997. 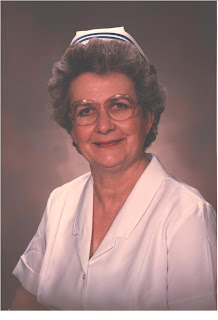 Known as “Gram” to her grand- and great-grandchildren, upon retirement she lived a “gypsy” life, traveling and living with her children around the country to help care for her many grandchildren so their parents could work and enjoy some free time by themselves.


In addition to travel, she learned to love to camp, and until just a few years ago, well into her 80s, it wasn‘t unusual to find her camping, with or without her family, in her tent and a well-used sleeping bag, in national and state parks around the country. She’d pitch the tent and plunk herself down in a camp chair and read National Geographic or one of the many other publications she still subscribes to.
She eventually settled in Mandan and now keeps busy getting to know her neighbors, participating in geography bees, and knitting special scarves for staff and other loved ones. She is a wizard with a needle. She and her mother, Lillian, made this quilt that I treasure. Her embroidered dish towels are in great demand. I have a drawer full and think of her each time I take one out. 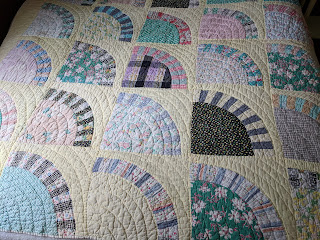 She is notorious in her dislike of cooking, but in spite of that, she could easily feed a large branding crew. Growing up, I did much of the cooking and she would volunteer to wash the dishes while I played the family Gulbransen piano. What a good trick to get me to practice! Chelsea played for her today. 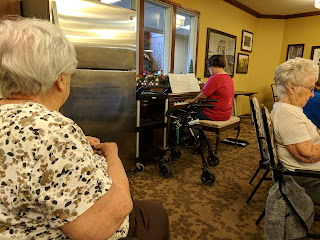 Marian Crook, the youngest daughter of tough Scandinavian and German roots, embodies the pioneer spirit and works hard to make her corner of the world a better place. She is truly an inspiring woman.

Happy birthday to my dear Mom. 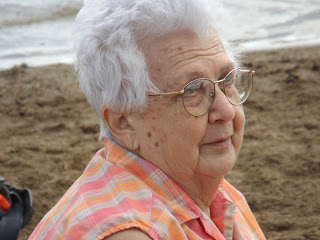 Posted by WildDakotaWoman TM at 1:39 PM