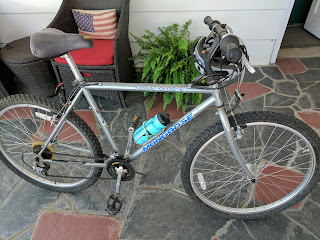 These lovely summer mornings I've been riding my bicycle on Bismarck's trail system.

This morning, as I pedaled, my mind wandered back to riding on Slope County dirt roads.  On many occasion, I had to dodge bullsnakes and rattlesnakes, giving them a wide berth.  Once, a pair of raccoons wandered out from our shelterbelt, startling me.  I remember them as being huge.  I know they tormented our farm dogs in the night, and, thus, us.  My Grandpa Andy would rise from his bed, grab his gun, and off he would go into the darkness.  The 22 (which he had bought from someone near Camp Crook for $10) discharged in the house causing no harm to anyone, but a great commotion and a hole in the ceiling.

When I was a youngster, I spent many days at the nearby Pearson farm.  They had three boys who were all the same age as my brothers and I, and were thus our playmates.  I can remember taking a very bad spill on my bike on their road and coming back to the house where the ever patient Dorothy doctored my road rash with hydrogen peroxide.  I was fascinated by the resulting bubbles, and soon forgot my woes in order to catch up with whatever the five boys were up to next.

While living in Dickinson, I would rise early on summer mornings, before the twins were awake, and would ride my trusty green Schwinn.  Once, I entered a bike race. As we all arrived early that morning, it was clear that I was out of my element as I was surrounded by sleek racing bikes.  I came in second to last, but my family cheered me on nonetheless.  It gave us a good laugh.   When the twins were born, we purchased one of those nifty yellow and red bike carts that we could pull along behind us.  I have many happy memories of looking back at those two faces as delighted to be outside as I was, and I'm sure that bike cart helped me get through maternity leave with a level of sanity.

When I married Jim, I "inherited" Rita's shiny mountain bike, purchased at Dakota Cyclery, and we donated my Schwinn to a child in need of a bike.  While living in Medora, Jim and I rode our bikes everywhere in all but the coldest weather.  Our Springer Spaniel, Lizzie, would get so excited when she would see me get the bike out as she would run alongside me.  Never would I attach her to a leash as that is too dangerous.  Only once did she tangle with a tourist's Boxer dog as we rode by the Red Trail Campground.  Nowadays, she just looks sad when I take out my bike because it is not a good idea to take her along when I ride in Bismarck.

This week we sold Jim's bicycle to a man from Donnybrook, and I was rather sad to see it go, but Jim said he wasn't going to ride it anymore, and we saw no point of it just gathering dust in our storage space.

In our garden, my Arizona Sun and Amber Wheels Gaillardia is making me quite happy.  Yesterday evening, we returned from the Paul Simon Summer Solstice concert in Billings, I told Jim I don't have a desire to go much of anywhere for the next couple of months as I just want to enjoy our garden. 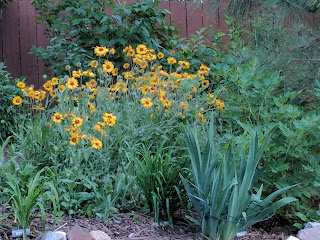 That is, except for trips to the Bad Lands and long bike rides.
Posted by WildDakotaWoman TM at 11:34 AM