The Day the Colima Warblers Broke My Heart

I am in Texas at the invitation of my friend, Valerie, who has a house here near the Davis Mountains. I have been a birder for more than forty years, and she and I greatly enjoy birding together whenever we get the chance. Here we birded together five years ago, but it was February, so I jumped at the chance to visit in April before it gets so blistery hot.

My penultimate goal was to observe the Colima Warbler, which can only be seen in the US in the high reaches of the Chisos Mountains in Big Bend NP, a species I'd never seen (it is not present in the US in February and my parents never took me to Big Bend NP all those years ago when we lived in Texas). 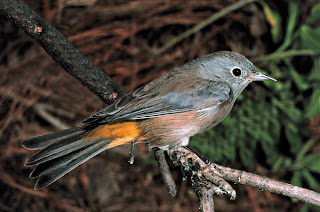 Val picked me up in El Paso (more about that in a future blog). We started birding the Chihuahuan desert right away. The song of the cactus wren in my old neighborhood took me back in time. It took us quite a while to drive to her West Texas home because we made frequent birding stops. In fact, it takes us quite a while to get anywhere for this reason. It wasn't long before I snagged a new species, the Chihuahuan Raven.

I'm enchanted by the fact that this is the street sign on the corner on which her house sits. 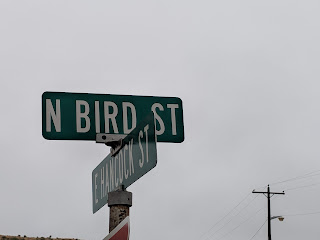 In the morning, we observed birds in her yard and then all around the town, including the cemetery, a very interesting walk in its own right. Our most frequent sighting for these days was the iridescent Vermilion Flycatcher. We also took a tour of downtown Alpine which has lovely murals that capture the images of West Texas culture. 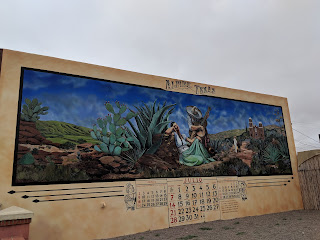 The next day, we took the long drive to Big Bend National Park, a fitting place to spend National Park Week. Valerie is a retired National Park ranger and one of her postings was five years in Big Bend NP as Chief of Interpretation. She knows and loves the landscape well and one can find no better guide. 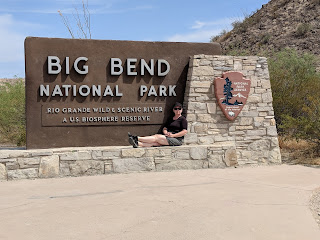 We camped in Cottonwood Campground on the Rio Grande River, where we birded and interacted with other birders. She has a camper, but I set up a tent, unaware that a very windy night was to come. The constant gusts of wind flattened the tent on my face and we both got very little sleep.

Nonetheless, we arose the next morning and began birding in earnest. Because of the water of the Rio Grande, the habitat makes for excellent birding. When we saw a bird, we noted its markings and slowly, unless it is a familiar species to us, came to an agreement. Our reference sources are our field guides, a couple of birding apps on our phones, our lifelong knowledge of birds, and the Big Bend Bird Checklist by her friend, Mark Flippo. 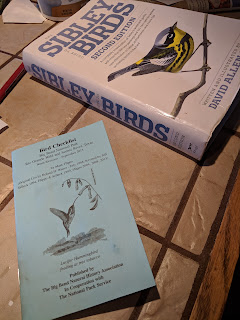 Neither of us takes all that many photographs as we prefer to be looking through our binoculars and storing away the mental images. I did attempt to photograph the Vermilion Flycatcher, but it is a poor quality photograph that doesn't begin to do justice to the bird. 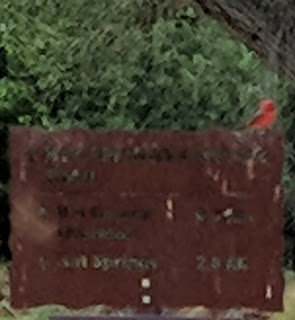 Here is a better photograph by a professional. 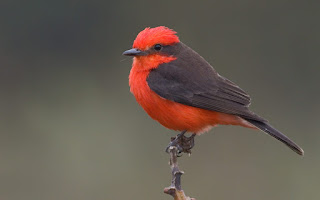 Equally as wonderful is the Scarlet Tanager, but we didn't see one, but rather we saw Summer Tanagers. 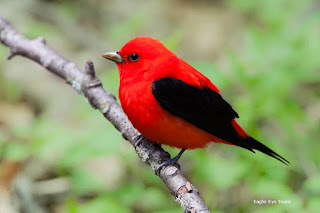 All around are other campers and hikers, birders and photographers. Near to our campsite was a Gray Hawk nest.

Our next destination was the Rio Grande Village campground and a boat trip across the river to Boquillas, Mexico, for the day, via the border crossing in the national park. It was staffed by a ranger who knew Val from her TR National Park days and we all had a friendly chat. 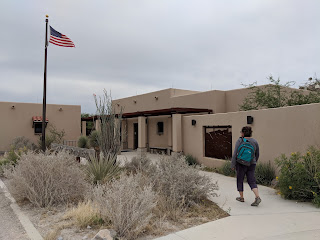 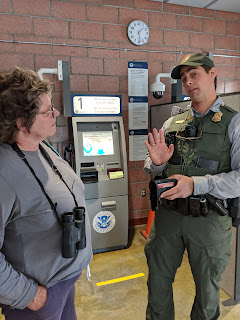 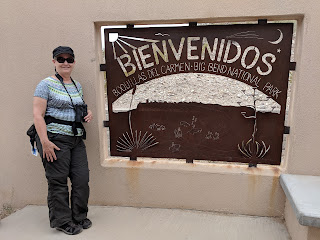 We paid the $5 for the boat ride across the river, although it is very low, as this is the livelihood of the locals. In Boquillas, I ate the best chicken tamales of my life and we enjoyed the laid back village vibe. Val purchased some highly recommended tortillas from a village woman to bring back for herself and her friend. 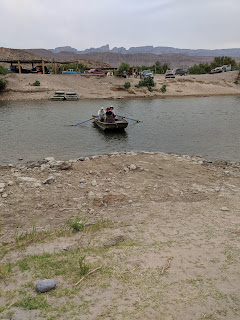 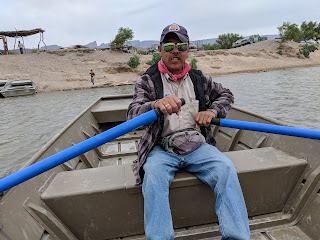 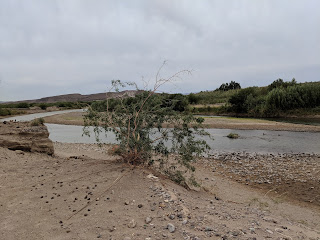 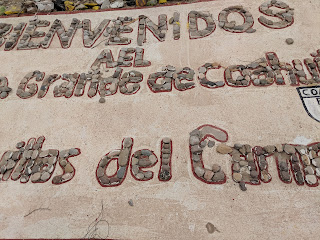 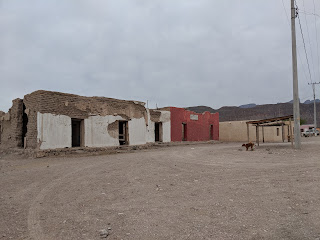 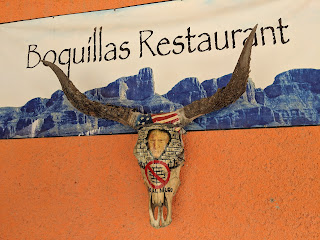 Upon our return, we birded around the Rio Grande, including some outstanding evening birding on the nearby nature trail. Then, it was on to Panther Junction where we crashed with an old friend of Val's who has been a wildlife biologist at Big Bend NP for decades. I am particularly taken with the Chisos red oak that grows in Raymond's backyard. Val and Raymond and I took a stroll in the dusk to find Elf Owls. We heard one but did not see it. Although Val does not, I count it when I hear a bird because I can picture these in my mind. A hot shower and a good night's sleep revived us.

The last day in Big Bend was focused on finding the Colima Warbler. We drove to the Chisos Basin, stopped in the Visitor Center, and prepared for the hike up the Chisos Mountains. The Chisos are the furthest south range of the Rocky Mountains and a striking feature in the heart of Big Bend NP. Big Bend NP is a huge and wild landscape, on a big bend of the Rio Grande River on the border, and is comprised of 801,163 acres, with many diverse ecosystems.  The Chisos Basin is at 5,400 feet and the highest peak is Emory Peak at 7,825 feet. We weren't going all the way to Emory but nearly. We knew we had a long hike planned, complete with lots of birding dawdling. Although I love all rivers, including the Rio Grande, the Chisos Basin is my favorite area of the park and I was thrilled to be there again.

The ascent of the Pinnacles Trail is 1,655.84 feet to an elevation of 7,078.05 feet. I was feeling the mild effects of the elevation and very grateful that the temperature was fairly cool. I could never endure the height of the summer desert temperatures with my ND sensibilities. As we hiked, Val identified plants unknown to me. 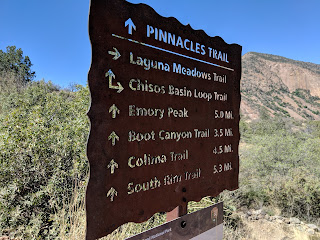 We met up with many hikers on the way. This woman had seen a Colima Warbler about 20 minutes before and she was on her way down. We pressed on, frequently stopping in the shade to cool off. The orange from my pack revived me, a lifesaver. 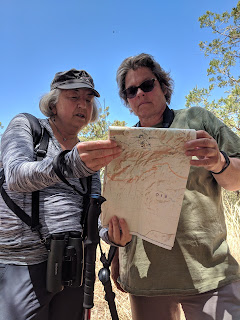 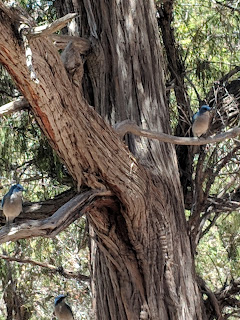 It is difficult to read the sign below, but it says Colima Trail, the trail we took to make a loop to connect to the Laguna Meadows Trail. 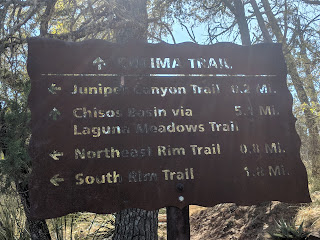 All around were desert plants: cacti, agave, juniper, madrone, and the Emory and Chisos red oaks. The distinctive blue agave is called a Century Plant. It blooms just once, after several decades of growth, and then dies. The side-by-side photo below is an example of this phenomenon. Hummingbirds and butterflies and other pollinators flock to the blossom. 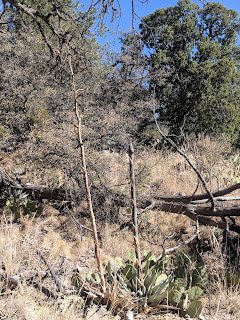 We wondered if this Century Plant (shown below), somewhere on the Colima Trail, would fall off the rock to which it clung when it sent up its bloom. 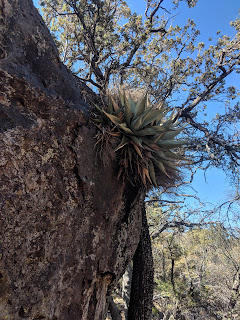 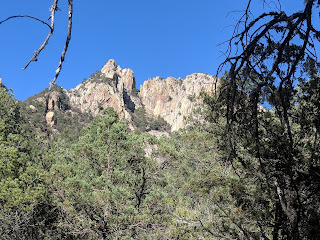 As we reached The Pinnacles, white-throated swifts chattered about. Otherwise, the day was dominated by Mexican Jays and Blue-gray and Black-tailed Gnatcatchers. 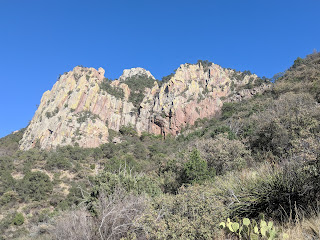 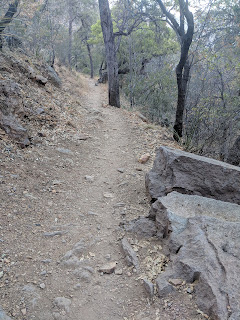 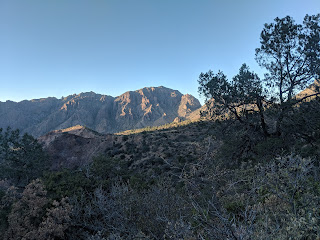 At the end of a very long hike, more than ten miles, we trudged back into the Chisos Basin, as the sun was setting. No Colima Warblers. Raymond had warned us that, due to the exceptional dryness of the year, the birds away from the Rio Grande were not as active. Valerie lived here for five years and has frequently visited and she has only seen "couple" of Colimas. I might have jinxed it earlier when I bought this cool medallion for my walking stick. 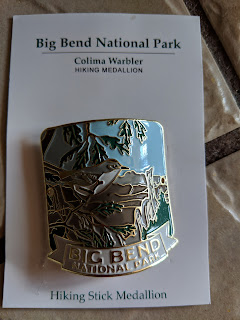 My heart wasn't completely broken though (I've weathered much worse). I had just spent a day soaking up the silence of this place, renewing my spirit, knowing that I was where the Colimas live and breed.  We saw no other hikers for the last six miles. And we were both spent.

As we left the Chisos Mountains, a full moon was rising over the desert. The stars were spectacular, Venus a beacon on the horizon, and Mars very red in the southeast. Deep within, I'd stored the memory of another Chihuahuan desert adventure, complete with numerous new bird species for my life list. More to come.

Drunk on my milky light of the stars
Anyone staggers. If I seem mad
I am. And if you see that
You are too. Be glad.
Rumi