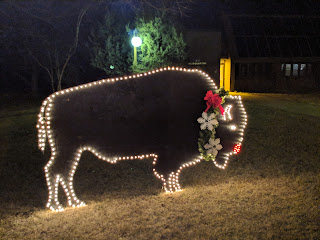 Each year, when our time permits, Jim and I try to participate in an area Christmas Bird Count (CBC). Friday, we traveled to festive Medora for a dusk drive through the national park, some Comet Wirtanen and Geminid meteor shower viewing in the dark Park, and a good night's sleep in the Rough Rider Hotel, and on Saturday participated in the "Medora CBC," expertly coordinated by the fine folks at Theodore Roosevelt National Park.


Birding enthusiasts gathered at the TRNP South Unit Visitors Center, on one of the shortest days of the year, for a 119-year-old ritual that adds critical data to the knowledge of bird populations. After a pleasant chat with friends, the Park staff helped us divide forces to cover the seven area zones, and off we went with our checklist and map. 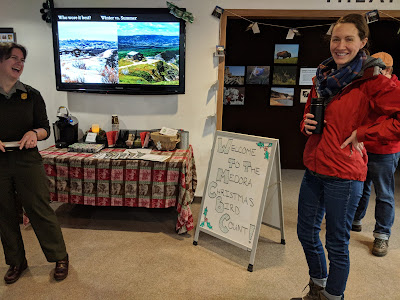 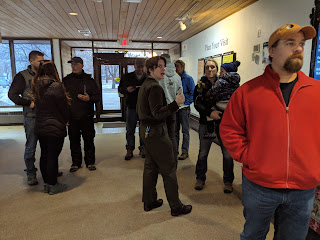 Jim and I were thrilled to cover the Park loop road zone, a zone we've not been able to do since some years ago. That year we did it with our friend, Valerie Naylor -- a very memorable year for the large number of bald eagles we spotted, and the mountain lion I saw while Jim and Val were distracted by a bald eagle, both of which were attributed to the partial elk carcasses left behind from the Park hunt that year.

This year the weather has been calm and mild for some time now so Saturday was an especially pleasant day for birding, although the wind increased as the day progressed. One year I did the North Unit CBC with Val and another Park staff member and it was very snowy and extremely cold (in fact, we got stuck in a drift). These counts take place no matter the weather, inasmuch as is possible.

Jim drove slowly so I could watch closely, yelling at him to stop at frequent intervals. Fortunately, there isn't much traffic at this time of year on the loop road. Our first sighting was a flock of Cedar Waxwings in a cottonwood tree, foretelling that it would be a real Waxwing day. I studied this first flock closely to determine between the more common Cedar and less common (in this area) Bohemian (which I spotted later). By the end of the day, we'd seen 57 waxwings.

The afternoon before we had spied a Bald Eagle, but, alas, not on Saturday's CBC day, however, we did see two Golden Eagles and seven Rough-legged Hawks, along with lots of Magpies. Oddly enough, even though we walked the campground and picnic area, and other wooded areas, we did not see or hear many of the more common species of the area, for reasons we could only speculate upon. 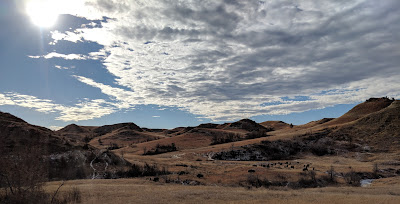 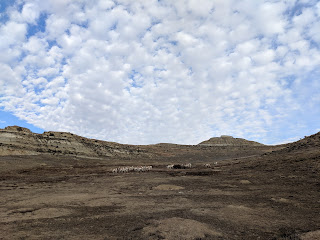 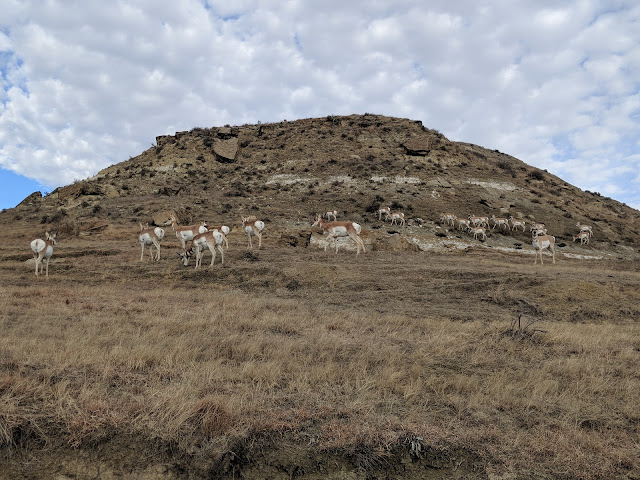 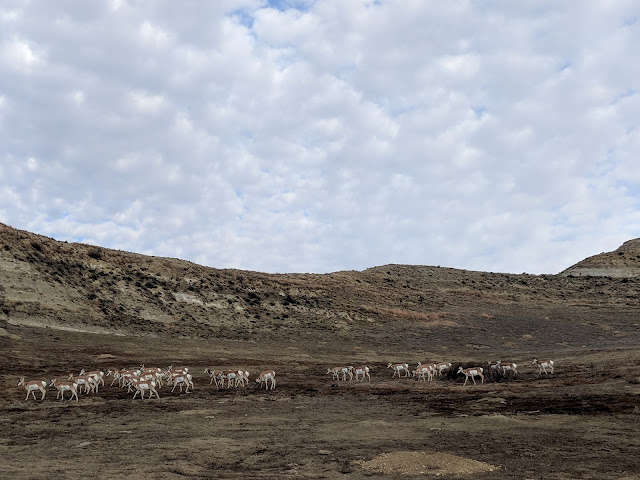 The temperature hit fifty degrees by early afternoon and most of the snow had melted, leaving puddles here and there, and water running in a few spots on the river.

Last fall, I wrote about my observation that there is an abundance of berries and seeds on the woody species this year, thought by many to foretell a hard winter. So far, that doesn't seem to hold true, but there is plenty of winter left. When I stopped to snap this photo (below) of the bright pop of buffaloberries in a dun landscape, I cast a long shadow on the shot due to the low winter sun, even as early as 1:00 p.m., a reminder of soon-to-be Winter Solstice, only 8.32 hours of daylight this coming Saturday.

We headed back to the village of Medora to turn in our data sheets, the first group to return and had to wait until today for the event's full tally from all the zones. An email from Kate at the Park reported that participants drove 206.5 miles, spent 16.5 hours of time in the car and walked 8 miles, sighting 1,559 total birds and 30 species, including 852 waxwings (!) with the following breakdown: 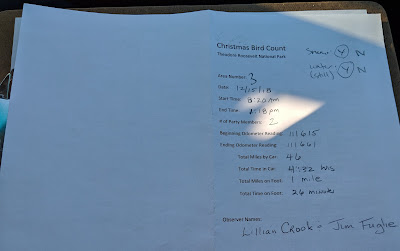 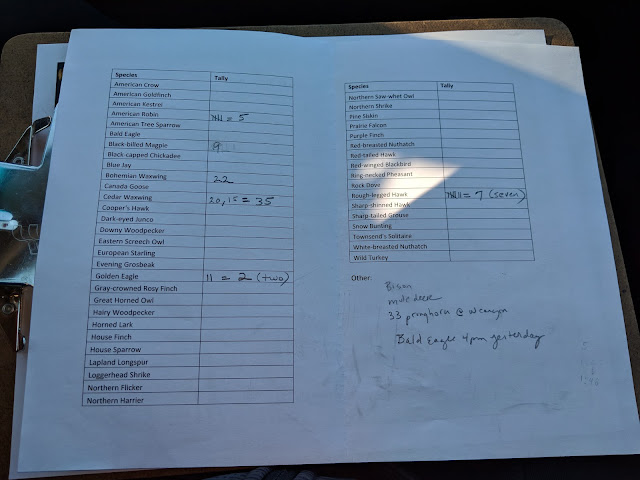 Posted by WildDakotaWoman TM at 1:06 PM