Although we have greatly anticipated its airing, at Red Oak House we mostly watched "Country Music" in delay, recording it for playback at our convenience, and we finished it Sunday afternoon. Every moment took me back to my many days in my father's homeland, Mississippi, and my time in Nashville when I was attending graduate school at Vanderbilt University, where we drove by the Mother Church most every day. We thought nothing of seeing music stars in the restaurants we frequented. That was just Nashville life. One of our classmates worked in the Country Music Hall and Fame library and came home with terrific stories. Our path on occasional walks took us to Music Row past the studios in which creative magic was happening. When we needed to blow off steam, we spent a day at Opryland riding the roller-coaster and enjoying the Grand Old Opry.

It is challenging to pinpoint what I loved most about the Burns series, but I am thrilled that the spotlight shined on two of my favorite performers, Emmylou Harris and Rosanne Cash. That, and the final, perfect frame on Mother Maybelle Carter, as it should be. Will the Circle Be Unbroken, indeed.

Much of what I know of country music was from my time in Slope County when I would drive the pickup to the field where my father was fixing fence, to take him "coffee". He would always be listening to the country AM station out of Baker, Montana. That memory and the recollection that my Mama Crook (my father's mother) went into mourning when Patsy Cline died, she who loved every single word sung by Loretta Lynn and Tammy Wynette. My mother remembers a very hot summer day at the Ryman Auditorium in the early 1950s when everyone tried to keep cool with paper fans and ticket holders were encouraged to relinquish their seats to those standing in line outside. 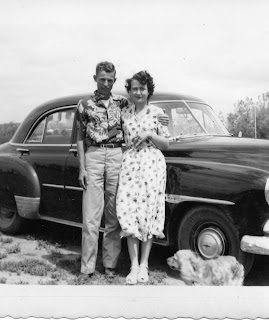 My Mama Crook herself had grown up singing and playing what they called "Old Timey" music with her siblings, their father a Civil War veteran of the Confederate Army (shown with their instruments in the photo at top, my great-grandfather center back row). It has been fun to witness my father's stories of listening to WSM on the family radio when he was a youngun'. He also learned to sing with shape notes at the nearby Friendship country church - what they called "lining out."

Years later, I took my husband to Nashville to see these places again. On our first night there, we went to a club. As the musicians were setting up their own instruments on stage for the show, I said to him, "That's Vince Gill!" "Nah," said my skeptical husband. When he admitted I was right, he was thunderstruck and sat back to soak in a quintessential Nashville moment.

These stories and the stories told in country songs are the fabric of my life. It is no wonder that my favorite of all music genres is Americana. I regularly stream the radio show American Routes, listening in my office/kitchen. Wouldn't that technology just amaze my Mama Crook? God bless Burns and his entire team for their heartfelt work. We are better people for their contribution to our rich heritage.

Posted by WildDakotaWoman TM at 11:40 AM