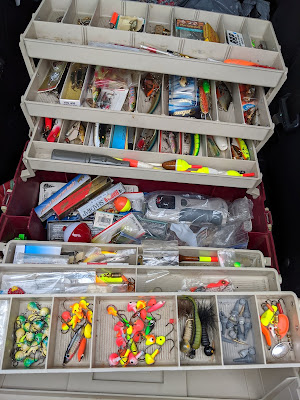 Bittersweet moment: dividing up my pa's incredible tackle box, what Jim described as the most well-appointed he had ever seen, to which I replied, "should be since it was his chief passion for almost 90 years." There were many antique lures within including one stamped "France."

My first memories of him fishing are set in an icy mountain stream near Colorado Springs, in the early 60s. My mother would throw the rainbow trout into a cast-iron skillet and cook them with the heads on. I gobbled up every morsel, with a piece of white bread at the ready in case he had missed any bones (he almost never did). He seldom took his daughters fishing (until Beckie came along and it was often just the two of them), but I do remember one excruciatingly long day when he took his (then) four children in a boat in the middle of Eleven Mile Lake in the Colorado mountains (there must have been an arrangement to give my mother a much-needed day to herself). When we lived in El Paso, we would camp along the Gila River in the mountains of New Mexico where he would spend his days in his waders and his children would wander and play in the water, throwing pebbles (we were told to keep the pebble-throwing far away from his fishing spot so as not to disturb the bite). Wherever we traveled in our brown Ford station wagon, he would be eyeing fishing opportunities. While he fished, my mother often took us to nearby historic sites and museums.

After retirement from the Army, we lived on the family farm/ranch in Slope County, and he hit nearby Stewart Lake and Davis Dam whenever he could get away from the chores. Trips to the Black Hills and Yellowstone National Park were a great treat. Once my father and my mother's uncle took a boat on Lake Yellowstone and the propellor fell into the depths--it is a huge lake so they had a long row back to shore.Visits to his family in Mississippi were devoted to fishing, sitting in lawn chairs visiting, and eating soul food prepared by the women, all of them great cooks. Once the men came home with a huge catfish, nearly as big as my younger brother, and they took turns "making pictures" of it with all of the cousins.

You can find several past blogs I've written about him, including this one. When he was living in Dickinson, he took a trip with his pals and his boat to a remote part of Canada and had a ball. These last years he has lived in Bismarck he greatly enjoyed fishing with Jim and Jeff on the Missouri, and with my sister, Beckie and her husband, on nearby lakes. One of the last times the "husbands" took him fishing was on nearby Harmon Lake, while my sisters and I kayaked (sense a theme here?).

Dad's younger brother frequently told him he should have become a professional fisherman. We are so very sad he can no longer fish. You think you have time, and then you don't.

Posted by WildDakotaWoman TM at 2:46 PM