My Father Dies on Memorial Day 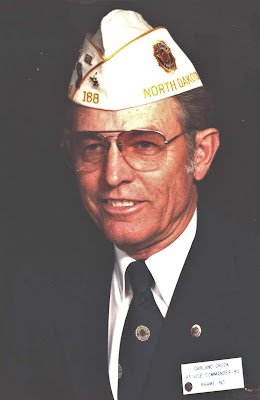 My father died on the morning of Memorial Day as "Taps" was playing on the nursing home televisions. Although we have been Skyping with him when possible during the lockdown and my sister and I each accompanied him for two separate medical appointments at Sanford clinic, we were not allowed to be with him in his final days, even though he did not have coronavirus nor was it present within his long-term care facility. Left with nothing more, we sat outside his window, which I insisted they open a crack. There we talked to him, told him stories, and sang hymns and songs. My sister made arrangements for him to be transferred to her home on Monday, where we three sisters would work with hospice care for his final days, but it was not to be. Grandkids who were in town came to the window for their goodbyes to their Granddaddy. My daughter, Chelsea Sorenson, sang several songs to him including "We'll Meet Again," a song she sang last June at the program we held for him on the 75th-anniversary of D-Day. On my phone I played for him Mahalia Jackson's timeless version of "Precious Lord, Take My Hand," and then the last song I sang to him was "Go Rest High." Listen to the inimitable Vince Gill sing the song he wrote if you wish here.

My father always requested that I bake him my from-scratch German chocolate cake for his August birthday. When the news of the lockdown came and it was clear that it would be lengthy, I baked one in the hopes it could be delivered. But, it was not to be so I froze it. I'll admit that a few tears were shed in the kitchen that day. That cake has just been torturing Jim who saw it every time he reached into the freezer for something. I took it out on Monday and my sisters, brothers-in-law, and a few grandchildren spread out on my patio for a German chocolate cake wake. 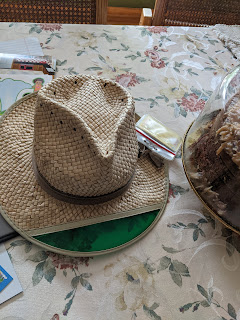 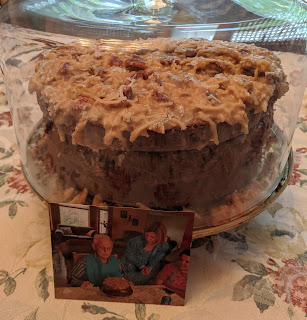 Fifty years ago this month, my father retired from a career with the U.S. Army. He had been offered the rank of Master Sgt, but he elected to retire at his rank of Sgt. First Class, and my parents chose to move our family to ND to help my mother's elderly parents with the family farm. I will never forget the ceremony that day on the parade ground at Fort Bliss. He carried a clipping from the newspaper in his wallet until the day he moved into the nursing home. 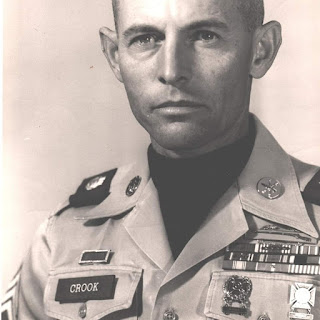 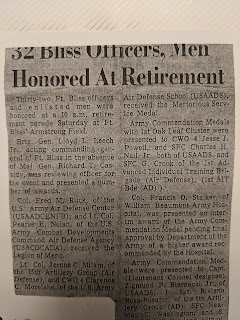 I've written several blogs about my father since I began my writing journey. Here are some links:
My Dad's Tackle Box (which was just given last week to his grandson, Jacob Walby, for his college graduation gift) 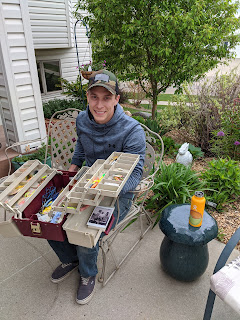 Because of the pandemic, we will not schedule the services until family members are able to travel and we can join together. For now, please share remembrances with us on the funeral home website at this link.

Years ago, I wrote his obituary with him, and Jim edited it. It gave him great comfort to know that the details were arranged. It is below.

Hubert Garland Crook traveled to his eternal rest on Monday, May 25, 2020, while living at a long-term care facility in Mandan, ND.

Garland was born at home in the Friendship neighborhood of Attalla County, Mississippi on August 12, 1924 to Jasper Earl and Lena Belle (Ellis) Crook, the first of nine children. He attended primary school at Friendship School, learned shape-note singing at Friendship Church, and completed high school at nearby French Camp Academy. At eighteen, he was called to serve in World War II in the US Army and was on the Normandy beaches on D-Day. Later he served as the personal driver to General Lee, and during this time in France and Germany he met many dignitaries including General Patton and the Duke of Windsor and the Duke’s wife. On VE Day, the general asked him to stay on in Europe, but he said, “I’m going home!” After military service which included the Korean and Vietnam wars, he retired from the Army as Sergeant First-Class in June 1970.

He married Marian Silbernagel, of Rhame, ND, in 1951 and they traveled the world with their children in the US Army life, including a few years they all lived in Okinawa. After his military retirement, they farmed and ranched in the Deep Creek township of Slope County, ND. He loved bluegrass music, football, and the outdoors, mostly gardening, camping, and his lifelong passion: fishing. He was very proud of his membership in the ND Walleye Whopper Club. He was a true handyman and held a wide variety of jobs in his long lifetime.

In 1986, he married Cheryl Hilden and they made their home in Mississippi, Dickinson, and more recently Bismarck, ND. He was very committed to and had Life memberships in The American Legion, Veterans of Foreign Wars, Disabled American Veterans and Forty et Eight. Through the years for these organizations he served on numerous committees, and held offices on the local, state, and national levels. He and Cheryl were members of Calvary Free Lutheran Church in Bismarck.

Due to the pandemic, services will be held at a later date and he will be buried at the North Dakota Veterans Cemetery near Mandan. Memorials may be made to French Camp Academy, 1 Fine Place, French Camp, MS 39745-9989. Arrangements are being handled by Bismarck Funeral Home.

Services have been scheduled on July 10th, with visitation at 9 a.m. followed by 10 a.m. services, both at the Bismarck Funeral Home. Burial will be at the North Dakota Veterans Cemetery at noon the same day, July 10th. The Cemetery reopened for services on June 1.
Posted by WildDakotaWoman TM at 4:32 AM