Solastalgia: The Drought of 2021 in North Dakota

Here in North Dakota in the spring of 2021, the headlines about the pandemic are being pushed aside by the daily news of the extreme drought and prairie fires. All of us search the forecast in hopes of rain, knowing the damage this is causing to the people, the critters, and the landscape we love. All of us search for any hint of green in the brown and dusty expanse. All of us are weary of the wind blowing nearly every day and the dust storms.
I have vivid memories of past droughts including the Drought of 1988. I also spend time each day with my mother who was born and raised on a Slope County ranch during the Dirty Thirties. She tells me of the tumbleweeds, of the grasshoppers scratching on the window screens in the night, and of the cattle that had to be shot. Mother also tells how my Grandma would instruct her that if they were separated due to a prairie fire, they should meet at the Yellowstone Trail sign west of our place. Last summer, when we were locked out of her nursing home, I would relish the mornings when I could call her and say, “Mother, it rained last night” and hear the relief in her voice. Sadly, those mornings were few and far between.
My husband, Jim, loves to tell the story about Gov. Art Link and the Drought of 1976. There was a big fire in Slope County that autumn, near Davis Dam, north of our Slope County ranch. I remember being on the school bus driving home from a basketball game, turning the corner east of Amidon, and seeing the smoke. We boisterous teenagers packing the bus went silent. Back at home, it was all hands on deck, and, in our farmhouse kitchen, we prepared hundreds of sandwiches which I delivered to the Davis Ranch, the fire operation headquarters (a teenager, I was thrilled to get any chance to drive on my own – to not mention the opportunity to be in the center of the action). During a tight campaign for his re-election, Link was forced to announce that the hunting season would be closed that year because of the extreme fire conditions and the Slope County fire. Then, just a few days before the election, the sky opened up and it rained! The downpour put out the Davis Dam fire, Link announced that the deer season would open on schedule – and he was re-elected.
Now we will forever remember the 2021 Good Friday and April Fool’s Day fire that burned thousands of acres of parched grasslands southwest of Medora, forced the evacuation of the village, threatened the national park, and scorched right up to the concrete portions of the Burning Hills Amphitheater, giving new meaning to “burning hills.” We bore witness to the fire as we drove through the TRNP South Unit, viewing the still-burning junipers (explosive torches in these conditions) from the park’s vistas. From our Easter weekend’s lodging near the Elkhorn Ranch, we stayed up late for star-gazing and followed updates on the fire closely.
We awoke Saturday morning to meadowlark song and found joy in the knowledge that the migrants had arrived in the night. Fording the low Little Missouri River, we hiked to TR’s Elkhorn Ranch site, where the buffalo-grass crunched underfoot. Our eyes were eager to spot any hint of green and we searched in vain for crocuses. A pop of cobalt revealed the arrival of mountain bluebirds.
The interpretive sign at the trailhead best captures something so true to my life.
"While my interest in natural history has added very little to the sum of my achievement, it has added immeasurably to the sum of my enjoyment in life." Theodore Roosevelt
By Saturday evening, the Medora fire was mostly contained, but a new one had sprung up in the Little Missouri National Grassland’s area north of TRNP’s North Unit known as Horse Pasture, threatening the park’s Visitor Center and housing. On our trip home, we visited Lake Ilo National Wildlife Refuge, near Dunn Center and from there we could see the smoke to the west billowing above the Killdeer Mountains. This is rugged country and the responders must be very weary, faced with a long fire season to come.
This past winter, the driest in North Dakota in recorded history, I’ve been pondering the word solastalgia, a neologism that describes a form of emotional or existential distress caused by environmental change, the lived experience of negatively perceived environmental change. The word is formed by the combination of the Latin word sōlācium for comfort and the Greek root -algia for pain.
The writer Robert Macfarlane first brought my attention to solastalgia. He writes, in his book Underland, it is a “term coined by Glenn Albrecht in 2003 to mean a ‘form of psychic or existential distress caused by environmental change’. Albrecht was studying the effects of long-term drought and large-scale mining activity on communities in New South Wales when he realized that no word existed to describe the unhappiness of people whose landscapes were being transformed about them by forces beyond their control. He proposed his new term to describe this distinctive kind of homesickness. Where the pain of nostalgia arises from moving away, the pain of solastalgia arises from staying put. Where the pain of nostalgia can be mitigated by return, the pain of solastalgia tends to be irreversible. Solastalgia is not a malady specific to the Anthropocene—we might consider John Clare a solastalgic poet, witnessing his native Northamptonshire countryside disrupted by enclosure in the 1810S—but it has certainly flourished recently. ‘Worldwide, there is an increase in ecosystem distress syndromes,’ wrote Albrecht in an early paper on the subject, ‘matched by a corresponding increase in human distress syndromes.’ Solastalgia speaks of a modern uncanny, in which a familiar place is rendered unrecognizable by climate change or corporate action: the home become unhomely around its inhabitants.”
Robert Macfarlane, Underland, pg. 317
Drought triggers solastalgia – may this epic drought end soon. 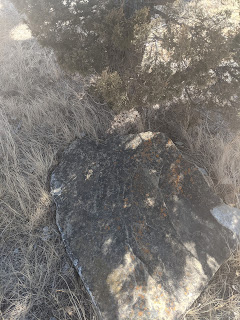 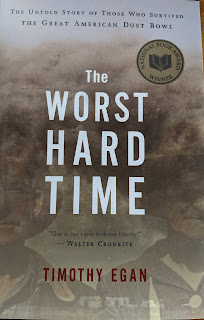 Posted by WildDakotaWoman TM at 12:30 PM