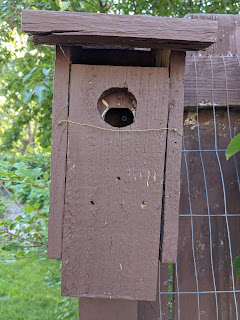 Judy Blue Eyes, most (healthy and spreading for ten years prior)

Prairie Angel (one of two)

The miniatures, however established, took the biggest hit. 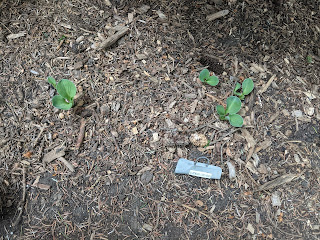 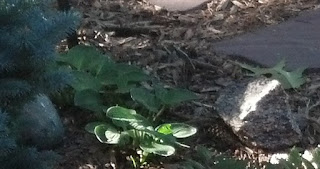 Little Light of Mine

And this one hurts perhaps the most as it was a gift last summer in tribute to my departed Dad: Master Sargeant. 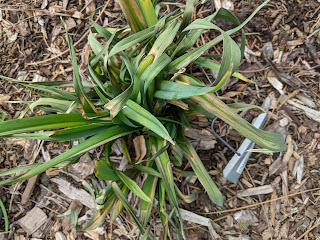 Above is what an otherwise healthy daylily looks like when scorched at 100+ for days on end. Most of the hundreds I have look like this. Some I had to cut back as if I had divided the plants so that the roots would not be supporting so much dead foliage.

Hollyhock (the ravenous rabbits are eating)

Probably a new Dogwood in front

I label most perennials and this picture captures all of the labels I had to pull the other day when I conceded the level of death in the beds. 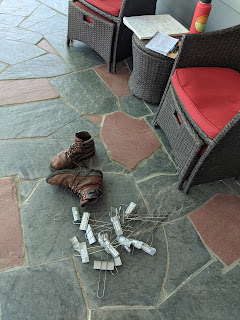 Then on a rare cool day, I set about digging spreading aspen roots out of beds. Now that was perhaps the biggest gardening mistake I've ever made, but the shade on the patio is welcome.

I fear there are more to come on the above list, although many of the driest areas of the gardens I xeriscaped from the beginning. Having a sprinkler system in an urban yard where the Missouri River is abundant lured me into getting perennials established, but the sprinkler system was designed for a big lawn. Thus, as the plants have grown, many spots aren't getting hit. And -- exceptional drought. Dry last year and the gardens went into the winter dry despite our best efforts. Almost no snow in the winter of 20-21 and now, even with rains all around us, very little rain in Bismarck, and only .60" in the recent rainstorms. Then, last weekend, records were smashed here with 106 on Friday, 100+ on Saturday and Sunday. Hence, the tender shoots, already struggling, were scorched, even the established and tough raspberry plants which I fight as they spread into the perennial beds.

The already declining songbird numbers were well known to me, yet I continued to hope that the House Wren would return -- if not to our nest box, at least to the yard. As the days ticked by, I began to worry and checked our garden notes, finding that one year the wrens arrived as late as June 10th. I had been reading that the spring bird arrivals were late here on the plains and the speculation was that the storms in Texas this past winter might have impacted the arrival dates. Last weekend we camped and birded with friends, who grimly reported that the storms in Texas didn't just delay the birds, but probably killed scores. We sure have birds in our yard, mostly flocking to the water stations, but I think there will be no House Wren.

In other tasks I set my mind to in the cooler basement, I've been sorting through the hundreds of nuts and bolts and screws and such I inherited from my Dad, since I just could not take it anymore when I needed something for a fix-it project and couldn't locate the right part. It's been a busy couple of years and it is easy to just throw the stuff on the shelf in the furnace room and move on to something else. Thus it is that my Dad has been on my mind. He, a child of the Great Depression, to his credit saved everything potentially useful. The bent nail I came across gave me a chuckle. He used blue painter's tape as an inexpensive way to hold packages together after he had been to the hardware store and opened the package for his day's project. Thus it is that every time I see blue painters tape, whether on the containers of nails and such or in my storage drawer of painting supplies, I will always think of him. I've also made frequent use of the jumbo pruning tool he gave me as I've had to cut back so much dead or dying foliage. 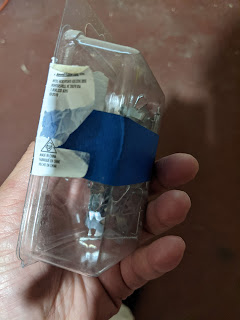 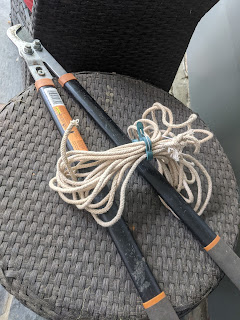 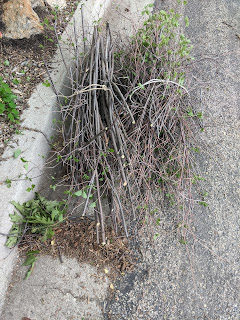 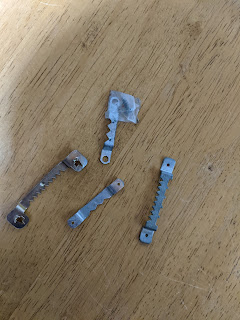 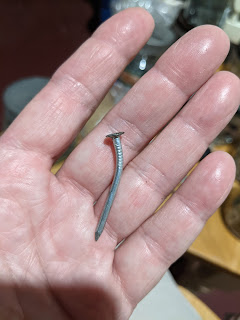 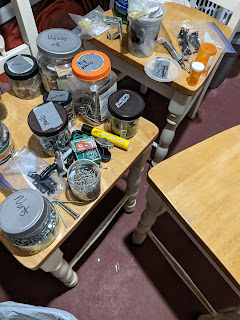 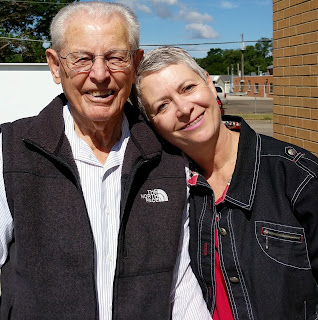 Posted by WildDakotaWoman TM at 5:38 PM