My Mom had a long life, raised by suffragettes of many generations, several of whom lived well into their hundreds and we all place a high value on the right to vote. And a right to privacy. And a right to make your own decisions and mistakes. And discussed and debated world affairs from the time my little ears started hearing things. And then I listened to the stories of many generations in my more-than-sixty years. But this is not a story about rights.

My siblings and I went to great effort to make certain our parents could vote until their last years even on their own with absentee ballots, making their own choices. Franklin Roosevelt was President when my Mother was born and I listened to the stories of the Roosevelts all my life, including what my Grandma Lily had to say about Eleonore Roosevelt's part in helping get the US through the years of the Depression. (Side note: mother bought us lots of children's biographies over the years, including a biography of Eleanor Roosevelt and Nellie Bly and Florence Nightingale).

During the Cuban Missle Crisis, we received orders for where she would take her children if the worst would happen and she told us about how terrifying it was that her older children would be in school and separated from her (dependents were going to be bused somewhere). One of my earliest clear memories (besides being told we are home and snow and cold water in various wells and such) is watching her watch the black & white TV in Slope County airing the JFK funeral and, like the world, mourning that event. And I do remember for good reason that my parents voted for Ike! At least I think they did. Well, my Mother told me over and over she most certainly did! I'm not sure who she voted for subsequently and that isn't important (and was, after all, her business, not mine), but I can say that she took great pleasure in voting for the first woman president and then lived long enough to cast an absentee ballot (someone she trusted from the family delivered it to a slot in Mandan -- we documented that for her far away son who was concerned that she might not get to vote while living in elder care) and she took some righteous pleasure in watching the inauguration of the first woman Vice President.

She loved the Dodgers. This stemmed from early memories including watching the Dodgers play baseball in LA, where we were living at that time. Her family played baseball in western North Dakota, including her cousins, the "Silbernagel" twins. Mother cheered for the Dodgers until her last days (my brother is a Cubs fan, but that is another story altogether). And she wore her Dodger shirt that someone in the family got for her, even during the last baseball season she watched. 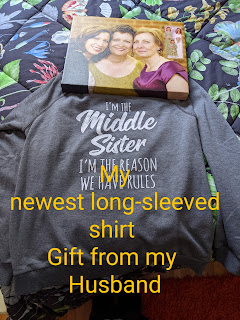 Posted by WildDakotaWoman TM at 12:16 PM