Red Oak House Garden Notes no. 41 -- the cutworms get the broccoli and the grill goes on the fritz

Every gardener experiences successes and failures and must learn to go with the flow.

Here at Red Oak House, the cutworms killed the heretofore vigorous broccoli. Mr. Green Jeans has replanted broccoli and protected the plants this time with milk cartons. On the bright side, the tomatoes look terrific, as does the rest of the vegetable garden, and for now, the beds are mostly weed free. The walleye are still biting, and, to our delight, we received over an inch of rain in the first two days of the week.

The tall bearded irises are vexing this year. I have only myself to blame as I had forgotten to order special fertilizer in a timely fashion and applied it late. I'm not certain this is the complete explanation, but I know it is a critical piece. I'm also struggling with increasing shade on the beds, a good problem to have I suppose. I'm going to have to decide whether to move all of the sun-loving plants into the two beds that receive (mostly) full sun and I regret that I won't be able to scatter these about all of the beds. Probably I'll give it one more year to see if timing the fertilizer correctly is the trick. That said, I do have lots of irises I need to divide come August.


One large and healthy looking iris (shown below) sent up many new flower stalks, but they shriveled up without opening. Shade? Too much heat? I just don't know. Everything around it seems to have had adequate moisture. A bitter pill to swallow.

We ate the first fresh radishes Wednesday and the house wrens seem to be raising a brood in their home on our back patio. Sometimes when I get too close, one of the adult wrens comes exploding out of the house right into my face. Gets me nearly every time. Look closely below and you will see one of the adults peering at me through the top opening of the house. 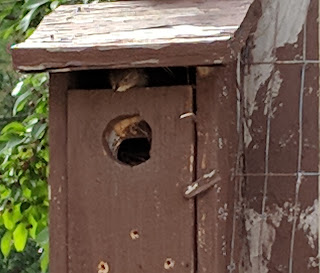 Today, I turned to the page in my book Words for Birds and learn: "House Wren Troglodytes aedon. Wren is the modern form of Middle English wrenne and Old English wraenna and wraene, which were used not only for the bird but also to mean "lascivious." Why the Angles and Saxons thoughts this bird to be any more lascivious than others is not all clear. Troglodytidae is formed from the Greek troglodytes, meaning "cave dweller," and coined from trogle, "hole" or "cave" (literally, one made by gnawing), and dytes, "inhabitant." The word is thought to suggest the wrens' constant seeking for cover. The Troglodytes of mythical fame were a cave-dwelling people of Ethiopia. For the House Wren (Troglodytes aedon), adeon is Greek for "songstress," especially a nightingale. In the myth, Aedon, a queen of Thebes, was jealous of her sister-in-law who had many children. She plotted to kill her eldest nephew but by mistake slew her own son. Zeus relieved her grief by turning her into a nightingale. Some may think the call of the House Wren is comparable to that of the nightingale. House alludes either to the care with which the wren builds its nest or the ease with which the wren can be attracted to a nest-box." (pgs. 200-201)

My peonies are also something of a disappointment this year. I wait all year long, each year, hoping it will be better than the last, thus my occasional gardener's blues. I moved many of the peonies just a few years back and they are taking longer to get established than I would like. I'm trying to be patient, but these take up a huge amount of space in the perennial beds and they'd better carry their weight soon or else. Some large plants have just a few blossoms at most, and a few have none. I've read the advice of ND gardening expert, Don Kinzler, and know that at least one of my plants needs to be divided.

That said, peonies are bright color in the time when I await the daylily blossoms -- and have such heavenly fragrance. 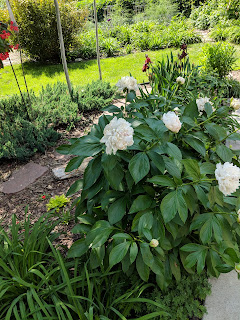 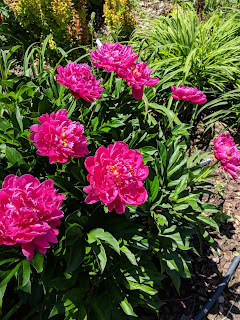 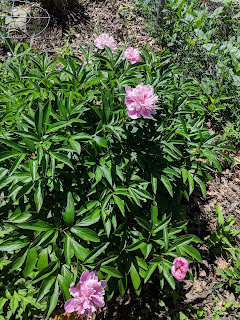 The ninebark and viburnum are also blooming now, as is the large patch of Wood's rose, although I've noticed that the Wood's rose has far fewer blossoms than previous years. Again, the drought is the likely explanation. 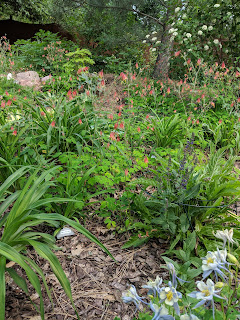 My front yard hosta garden looks splendid this year. The message is that shade gardens, while subdued, are very pleasing. When I planned the hosta garden, I was looking for a Zen-like woodland vibe and I achieved that. Last week, I purchased more Praying Hands hosta and changed out the dirt in that area completely when I added the new seedlings to the existing plant. A previous owner must have had gravel on much of the front yard. Later, a thin layer of dirt was added and grass planted, so I've had to fight the gravel and poor soil, a battle I finally seem to be winning. 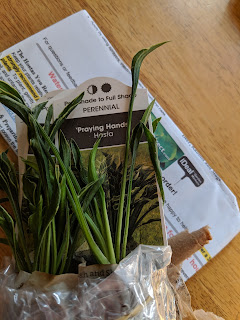 On other fronts, I'm very nervous that the city is going to make good on its threats and put a sidewalk across the front of our property. All shown in the photo below will be lost, including the first thing I planted when we moved in, a robust Taunton spreading yew. I sure hope not! 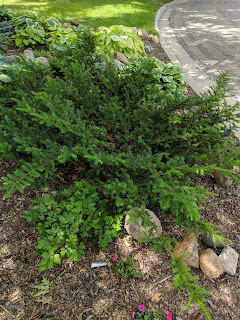 The grill is on the fritz, but Jim is working on it and had a backup in the storage area so all was not lost when it was time to make kabobs. 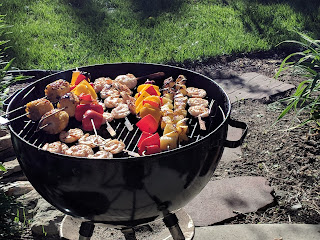 Oh, and those gazillion elm seeds I complained about. They are sprouting. More weeding, less blogging, I guess. And a stack of good books for summer reading! 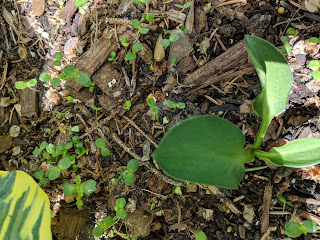 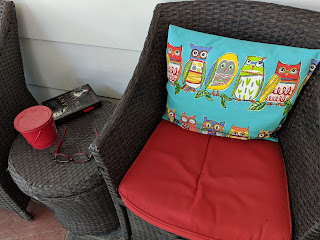 Finally, the showstopper right now in the garden is the gorgeous tree peony that burst into bloom today. A Bartzella tree peony, it has become one of my favorite plants, both because of its yellow glory and because it was an exceptionally thoughtful gift from my friend, Bob. He must have known how I love the color yellow. 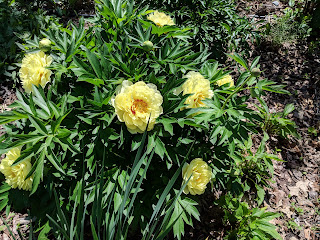 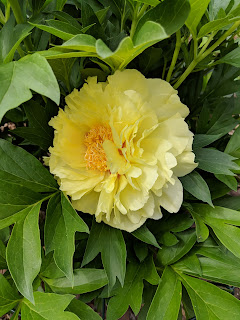 Now, we will end our week with some great Dakota live music, ala Chuck Suchy at the Co-op and the Cross Ranch Bluegrass Festival. The good life. 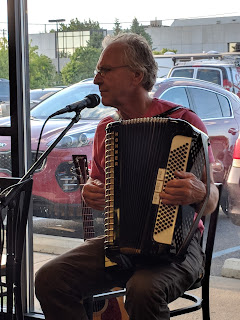 Posted by WildDakotaWoman TM at 12:15 PM