Walk on the Wild Side -- in the Bad Lands

While life at Red Oak House here on Missouri River is filled with many blessings and much happiness, as frequently as possible we refresh our spirits with visits to the Bad Lands of North Dakota. Which we did early this week, joined by our daughter, Chelsea, and Paul and Joe, our friends from Arizona (photo of Paul and Lillian below, pals since childhood).


We met on the veranda of the Rough Riders Hotel to make a plan. After a quick lunch, determining that Paul had not been to the Chateau de Mores since his southwest ND childhood days, we went there to tour. Joe had never been. Thus it was a good way to reflect upon the founding of the town of Medora and the colorful characters who lived there in the 1880s. When Chelsea was in college, she worked at the Chateau for the summer, as part of the interpretative staff, in period costume. I'm pleased at how much she remembers.

It was a perfect late May day and the Bad Lands are very green right now. There is an array of wildflowers in bloom, including Prairie Ragwort and, my favorite, Prairie Smoke. 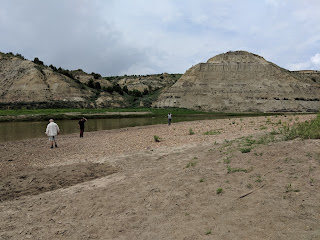 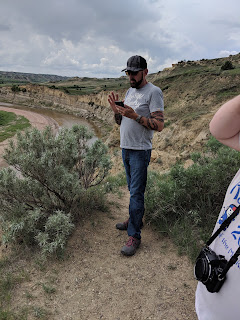 We spent the remainder of their two-day visit hiking Theodore Roosevelt National Park trails and driving the loop road. It was very interesting to observe the effects of the recent controlled burn, which, although it might seem extreme due to the fire's proximity to the road, close observation revealed a mosaic pattern that mimics the natural prairie fire process, effecting a relatively small percentage of the Park's total acreage. 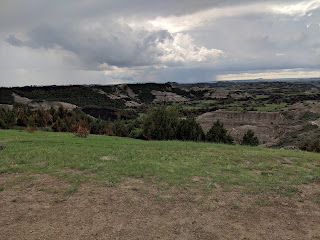 We observed many grazers taking advantage of the fresh green native grasses that had quickly sprouted in the wake of the fire, including a fine bull elk.


Day two found us taking a four-mile hike to the Petrified Forest on the Park's west side, a place neither Joe nor Paul had seen, and it was another pleasant day with temperatures in the high 70s. I pointed out to my companions that we were in the officially designated wilderness within the park. A couple of bison bulls were spotted and we gave them a sufficiently wide berth. 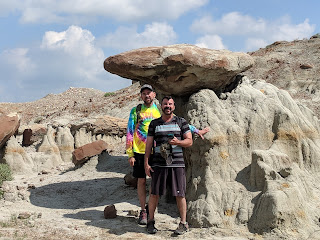 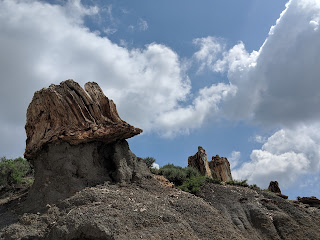 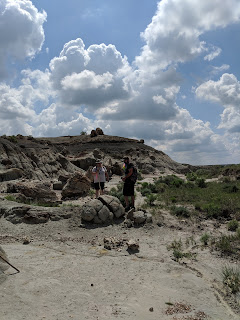 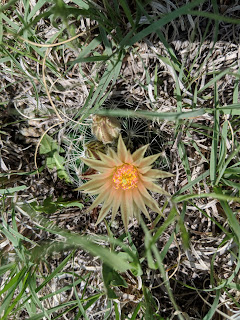 Although I'm fairly knowledgeable regarding prairie wildflowers, this one (below) had me stumped (although I thought it was likely a vetch). In all of the miles we hiked, I saw only this one large clump of this specimen. Later, I checked with friends, crowd-sourcing this on social media. One of my friends identified it as a Narrow-leaved Milkvetch (Astragalus pectinatus). 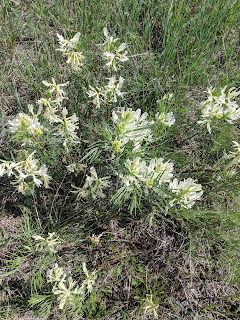 The dominant birds of the day were Lazuli Buntings, Bobolinks, Meadowlarks, and Yellow-breasted Chats. While we hiked, I taught the others some about the birds and plants, and confessed to being rather a dunce when it comes to rocks.

While we hiked and chatted, we learned that our friends had never been to the Elkhorn Ranch. By Godfrey, this must be solved, said we, and off we went. The ticks were thick there and a very fine specimen of a bull snake slithered across the trail. We were pleasantly surprised to find a few other visitors who'd made the trek.

Then, it was time to return to Medora, for pizza, followed by a farewell to our good friends and trail companions, until their next visit to North Dakota. 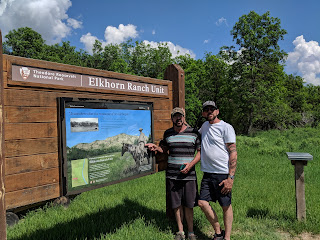 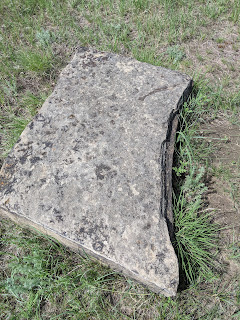 "My home ranch-house stands on the river brink. From the low, long veranda, shaded by leafy cotton-woods, one looks across sand bars and shallows to a strip of meadowland, behind which rises a line of sheer cliffs and grassy plateaus. This veranda is a pleasant place in the summer evenings when a cool breeze stirs along the river and blows in the faces of the tired men, who loll back in their rocking-chairs (what true American does not enjoy a rocking-chair?), book in hand--though they do not often read the books, but rock gently to and fro, gazing sleepily out at the weird-looking buttes opposite, until their sharp outlines grow indistinct and purple in the after-glow of the sunset." Theodore Roosevelt

Posted by WildDakotaWoman TM at 4:04 PM