This past Wednesday, Badlands Conservation Alliance, a grassroots group of which I am a founding voice, announced to its membership that longtime Executive Director, Jan Swenson, is retiring at the end of March. Jan has been at the helm for the past twenty years. In fact, BCA would very likely not exist were it not for Jan's leadership from the get-go. She has been a stalwart in defending wild North Dakota places and inspiring countless folks to step up & speak out for lands we love, tirelessly organizing us and fearlessly speaking out on myriad issues. 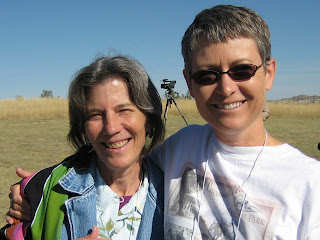 I have so many Jan Swenson stories, which I will save for another day. Do come to the reception we will be hosting in her honor on April 7th at 3:30 in Bismarck at the Capital Gallery. I'll share some stories at that gathering and we will all wish her a well-deserved and happy retirement.

If you are inspired by the work that Jan (and BCA) does, do consider applying for the job. We are hiring & that info appears on the BCA website.


A message from the founder and current President of BCA, Lillian Crook.
For twenty years, Jan Swenson has put her shoulder to the plough for BCA, birthing the organization from its initial days, growing it to be the force it is today, a well-respected grassroots voice for the wild badlands. She has decided that the time has come for her retirement. While it is difficult to imagine BCA without her leadership, know that the board of directors is endeavoring to seek a new executive director to be at the helm going forward. Please see the following release for more information, and, if you know anyone who might be a good fit for this position, do let them know we are hiring.
Please join me in wishing Jan all the best in her retirement years. A reception will be held to honor Jan on April 7th at 3:30 p.m. at the Capital Gallery in Bismarck.
JAN SWENSON TO RETIRE; BADLANDS CONSERVATION ALLIANCE
SEEKING NEW EXECUTIVE DIRECTOR
For more information:
Connie Triplett
BCA Board Member
(218) 230-4160
connie_triplett@msn.com
Bismarck, ND, March 7 2019
Jan Swenson, longtime executive director of Badlands Conservation Alliance (BCA), will retire at the end of March.
BCA is a North Dakota-based grassroots organization dedicated to the restoration and preservation of the North Dakota Badlands and rolling prairie ecosystem comprising western North Dakota’s public lands, both state and federal.
According to the organization’s website, BCA “provides an independent voice for conservation-minded North Dakotans and others who are appreciative of this unique Great Plains landscape and want to ensure that the public lands management agencies adhere to the principles of the laws that guide them and provide for wise stewardship of the natural landscapes with which the citizens of the United States have entrusted them – for this and future generations.”
The organization said it will immediately begin a search for a new full-time executive director, to be located in Bismarck. Information on the position will be posted shortly on the group’s website, badlandsconservationalliance.org.
Swenson, a lifetime Bismarck resident, has served on the staff of BCA since its founding in 1999. Her organizational skills, combined with a propensity for volunteer activism at the grassroots level, led her to BCA and her current staff position.
“Jan is probably the most knowledgeable person in North Dakota about threats to public lands in North Dakota, especially the Little Missouri Badlands,” said Lillian Crook, BCA founder, and current BCA president. “We’re going to miss her ability to explain problems with development encroaching on pristine areas, and to reason with public officials about how to minimize impacts to the land, water, air, and wildlife in western North Dakota.”
In 2018, Jan was named one of the Conservation Communicators of the Year by the North Dakota Wildlife Federation for her work in presenting the movie “Keeping All The Pieces,” an award she shared with Mike McEnroe, past president of the Wildlife Federation. The movie is a 15-minute outreach film illustrating both the beauty of our Badlands and the threats Bakken oil development brings to landscape, wildlife and traditional uses, and was co-produced by Swenson, McEnroe, along with Allyn Sapa and created by Makoche Recording Studios.
In 2017 she received the North Dakota Award from The North Dakota Chapter of the Wildlife Society, the organization’s highest award, given annually in recognition of outstanding contributions to the profession of wildlife management, and she has also received a Special Service Award for conservation work and leadership from the Sierra Club.

A special reception to recognize Jan for her work will be held April 7 at 3:30 p.m. at the Capital Gallery in downtown Bismarck.
Posted by WildDakotaWoman TM at 8:01 AM