Having birded for decades, one often plateaus in the endeavor of adding birds to one’s life list. This is certainly true for me, hence, motivation to travel to new and far-flung places. Thus it was a great delight when traveling recently to southern California, where I’ve spent little time, to discover that I would have the chance to see a unique bird.
It was a completely serendipitous opportunity originating in our goal as a couple to visit every national park site in the United States. Channel Islands National Park, an archipelago off the coast of California, was one of our destinations on this extended road trip. The string of islands (five of the eight islands along the coast make up the national park) are accessible only by a ferry-ride (or flight) across the Santa Barbara Channel of the Pacific Ocean. When we arrived at the Channel Islands NP Visitors Center in Ventura, next to the ferry headquarters, orientation for our upcoming expedition revealed a delightful surprise: our chosen destination, Santa Cruz Island, is the only place in the world where the Island Scrub Jay is found (also known as the Santa Cruz Island Scrub Jay). 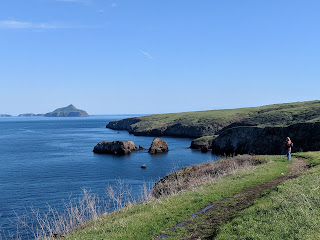 I dug out my old birding field guide in which I’ve kept records of sightings, and, sure enough, there was an easily overlooked mention of the Island Scrub Jay. I hadn’t given it any thought when we chose what island to visit and our selection was mostly motivated by the fact that potable water is available at the campground. Indeed, we did camp, packing the minimum gear given that one must hike a half mile from the pier to the campground. Tucked into my day pack was a newly purchased bird checklist for the islands (which can be found at their website at https://www.nps.gov/chis/learn/nature/upload/bird-list-all-final.pdf). 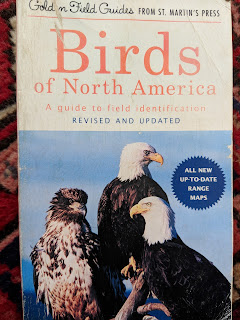 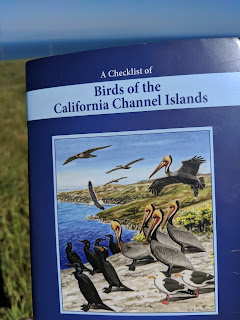 While the weather was fairly rotten (record cold in southern California in February), and the wind was biting on the exposed deck of the ferry, I spotted numerous pelagic (open ocean) species along the way, including Pelagic Cormorants and Pacific Loons. Most of the people on the ferry were day-trippers, including a sizeable group of Road Scholars. Once we had pitched our tent, we set off, hiking to a high point to get a magnificent view of the island and the ocean.
Channel Islands National Park is home to an abundance of birds – 387 different species have been recorded. Black Phoebes and Brown Pelicans were particularly numerous during our visit. The hiking guide presented us with many options, but I honed in on the route on which the Santa Cruz Island Scrub Jay would be present--Scorpion Canyon. We ended the day with no sighting of said. In the night, an exceptionally cold and long night, two very loud Northern Saw-whet Owls called right above our tent for an extended time. 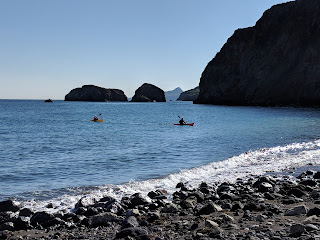 Sunrise found us drinking coffee at the beach where we spotted a California sea lion popping his head up in the surf and gray whales spouting as they passed nearby in the Santa Barbara Channel. A chat with one of the sea kayaking guides revealed that he had already seen four jays that morning from his campsite. As soon as we broke camp and stowed our gear near the pier, we set off up Scorpion Canyon, only hiking about a mile and a half before Eureka! The Santa Cruz Island Scrub Jay. 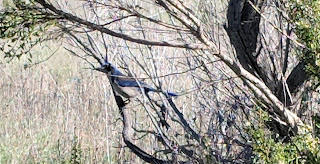 The jay is larger (at 13”), heavier, and more richly blue than the ordinary Scrub Jay, and is the largest and darkest of all of the jays. It also has a longer bill than its relative by about 20 percent. We were fortunate to observe a pair, perched in the scraggly trees along Scorpion Creek, and three others scattered throughout the chaparral by the end of what was, for me, a twelve-mile hike from sea level to El Montanon Peak, at 1808 feet the highest point of Santa Cruz Island.
An endemic species is one restricted to a particular location. According to the Islands’ checklist, the Scrub Jay is “the most distinct” endemic species on the islands. The estimated total population is about 2,300.
The Island Scrub Jay, Aphelocoma insularis, is the only continental US bird species to not have ranged to the mainland and is one of the most range-restricted songbirds, a superb example of island biogeography, a field that examines the facts that effect the species of isolated communities. The California Scrub Jay has never been seen on the Santa Cruz Island. The word Jay is from “the Old French gay and iay, descended from Latin, gaius, gaia, imitative words” according to the book Words for Birds: A Lexicon of North American Birds with Biographical Notes. Aphelocoma is Greek for “smooth hair,” referencing the lack of a crest in Scrub Jays. Scrub suggests its preferred habitat in scrubby places. The Island Scrub Jay, belonging to the Corvidae (Crow) family, is listed as a vulnerable species. It was first identified in 1875 by naturalist Henry Henshaw. 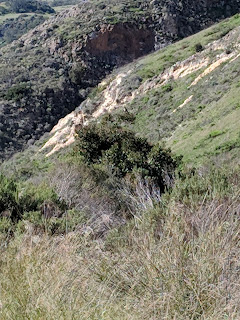 The Island Scrub Jay’s call does not have the “advertising song” as is found in many jays, yet it is unmistakably jay-like in its distinctive squawk. The great American writer Mark Twain said this about jays: “You never saw a bluejay get stuck for a word. He is a vocabularized geyser.” He also wrote a jay “is human; he has got all a man’s faculties and a man’s weakness. He likes especially scandal; he knows when he is an ass as well as you do.”


Not much I can add to what Twain has to say except to urge fellow birders to visit enchanting Santa Cruz Island.
Posted by WildDakotaWoman TM at 7:53 AM