Red Oak House Garden Notes No. 51: Digging in the Dirt is My Therapy

Digging in the dirt is my therapy and we have been doing plenty of digging these past few weeks at Red Oak House. 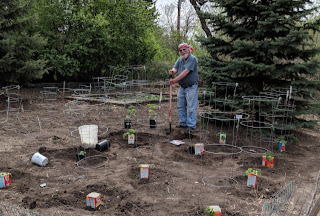 Jim has planted 25 of his heirloom tomatoes he started by seed in March and given away his remaining seedlings. He reports that the peas and potatoes have sprouted with the long-awaited arrival of sunny weather and we will be eating lettuce soon.

When I was very ill with Lyme disease this past winter, I would look out the window and wonder how on earth I would manage to care for the perennial beds this year. Thus it was with a renewed sense of joy and purpose that I spent the past few days gardening.

All day Thursday I divided, moved, and planted hostas. The front yard is a shaded rock garden with no grass. It was particularly rewarding to divide plants I planted the first year we lived here, with ten years of growth. Hostas are slow to establish, but once they take, most varieties get larger each year. The hardest part is to push my shovel through a thriving plant to make the division. I should have been at it earlier this spring before there was so much top growth, but it has been a cold and gloomy spring. 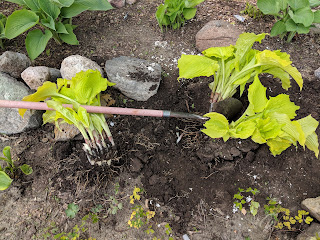 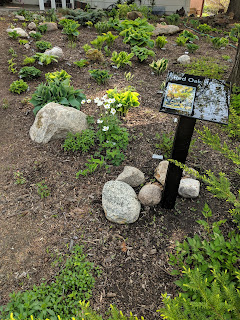 Friday through Sunday was spent dividing and moving daylilies, working from my notes of last fall. While I worked, I cursed the burrowing critter (mole or gopher) which did so much damage to the backyard beds last winter, killing many perennials. I know that this means that the soil has been loosened, but the loss is annoying nonetheless, and expensive.

I also muttered about my rookie mistake of planting quaking aspen ten years ago, desperate for shade for the back patio as well as longing for the music of its trembling leaves. I dug the spreading roots out from the flower beds, filling a dumpster with roots. No wonder we have to water so frequently!


While I worked, I listened to spring birds, including the Red-Eyed Vireo and Northern Cardinal which arrived this week. We've been hearing House Wrens nearby, but as of yet none has moved into the house we provide. I've read that spring birds are late this year because of the dreadful weather in the central part of the United States. Yesterday, with the help of my friends in the Bismarck/Mandan Bird Club, I identified the Tennessee Warblers by its distinct call, abundant in my neighborhood.

Last week, we had several Black-headed Grosbeaks at the sunflower feeder, however, the arrival of warm weather seems to coincide with their departure to more arctic regions. This causes me to turn to my copy of Words for Birds where I learn that Grosbeak enters English from the French grosbec, meaning "thick-billed," as are these birds'. Black-headed Grosbeak (Pheucticus melanocephalus) are from the Greek, pheucticus for "shy or evasive" and melancocephalus is coined from melas, "black," and kephale, "head."

While I putter about in the gardens, I enjoy the current blooms including the thriving Prairie Smoke (shown below) which we transplanted from Square Butte (the one in Billings County). 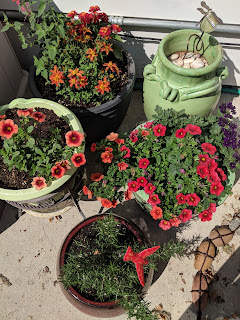 The patio pots are done and the new leaves are unfurling on the champion Red Oak. Waves of lime green pollen blowing off the spruce trees as well as the haze from Canadian forest fires portend the near arrival of summer. Moreover, Wednesday was the first time this year we left all of the windows open all night and Thursday was the first day to close all the windows by late morning in order to keep out the heat of the day. 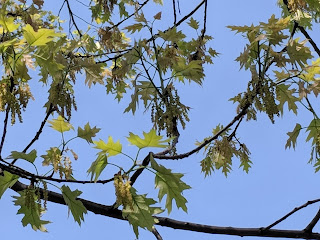 After struggling for ten years with a frequently leaking roof on Red Oak House (mostly due to ice dams), I put my foot down and a couple of weeks ago we had a steel roof installed. There was much commotion and I'll be picking up tiny pieces of the shingles they removed for years, but we couldn't be happier with the end result. I sleep more soundly under the steel roof and get a weird pleasure in watching the rain come down upon it. We chose a burgundy color and later this summer we will be painting the house gray. 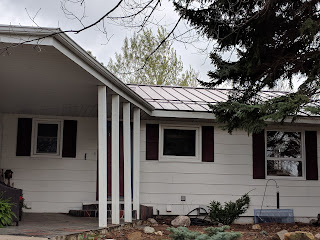 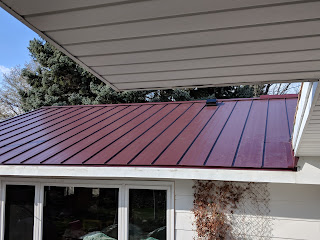 The battle with the voles, gophers, bunnies, and slugs is underway. Although I've given up growing most plants that succumb to these pests, I'm determined to win for the remaining foliage. Hence I filled all of the tuna cans I've strategically buried throughout the garden (level to the ground) with beer to catch the slugs. I also liberally sprinkle pennies (the copper is said to repel) and crushed eggshells. Jim brought home some new bunny repellent spray from Menards and it seems to be helping, so long as I remember to spray after rain or watering. 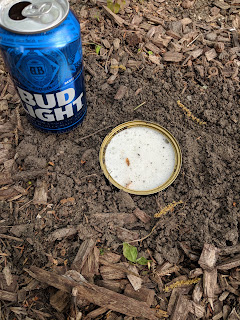 Jim and his pals are fishing on the Missouri most days and at long last, the bite is on. He came home the other day to report that the "jungle bird" is back, and it was time for me to go with him to Sibley Park (which is near where they fish) to identify it for them. Thus it was that I arose earlier than usual on Saturday, on a mission (I am no longer an "early bird" most days). The bird has a rather loud and raucous call, hence their moniker "jungle." We heard it right away, in fact, numerous calls throughout the swampy land between the park and the riverbank. It wasn't very long before I pinpointed it as Wilson's Snipe. You can listen to their call here.

Here's to more pleasant mornings birding and every evening dining on our patio, under the quaking aspens!

To the Snipe by John Clare

Lovers of swamps
And quagmire overgrown
With hassock-tufts of sedge, where fear encamps
Around thy home alone,

The trembling grass
Quakes from the human foot,
Nor bears the weight of man to let him pass
Where thou, alone and mute,

Sittest at rest
In safety, near the clump
Of huge flag-forest that thy haunts invest
Or some old sallow stump,

Thriving on seams
That tiny island swell,
Just hilling from the mud and rancid streams,
Suiting thy nature well;

For here thy bill,
Suited by wisdom good,
Of rude unseemly length, doth delve and drill
The jellied mass for food;

And here, mayhap,
When summer suns have drest
The moor's rude, desolate and spongy lap,
May hide thy mystic nest --

Mystic indeed;
For isles that oceans make
Are scarcely more secure for birds to build
Than this flag-hidden lake.

Boys thread the woods
To their remotest shades;
But in these marshy flats, these stagnant floods,
Security pervades.

From year to year
Places untrodden lie,
Where man nor boy nor stock hath ventured near,
Naught gazed on but the sky

And fowl that dread
The very breath of man,
Hiding in spots that never knew his tread,
A wild and timid clan,

Widgeon and teal
And wild duck--restless lot,
That from man's dreaded sight will ever steal
To the most dreary spot.

Here tempests howl
Around each flaggy plot,
Where they who dread man's sight, the water fowl,
Hide and are frightened not.

'Tis power divine
That heartens them to brave
The roughest tempest and at ease recline
On marshes or the wave.

Yet instinct knows
Not safety's bounds:--to shun
The firmer ground where skulking fowler goes
With searching dogs and gun,

Freebooters there,
Intent to kills or slay,
Startle with cracking guns the trepid air,
And dogs thy haunts betray.

From danger's reach
Here thou art safe to roam,
Far as these washy flag-sown marshes stretch
A still and quiet home.

In these thy haunts
I've gleaned habitual love;
From the vague world where pride and folly taunts
I muse and look above.

Thy solitudes
The unbounded heaven esteems,
And here my heart warms into higher moods
And dignifying dreams.

I see the sky
Smile on the meanest spot,
Giving to all that creep or walk or fly
A calm and cordial lot.

Thine teaches me
Right feelings to employ--
That in the dreariest places peace will be
A dweller and a joy.
Posted by WildDakotaWoman TM at 1:02 PM