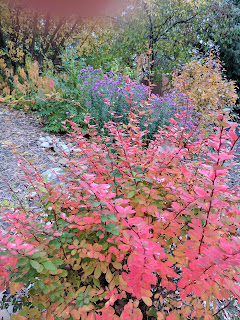 This morning I worked in the cool autumn sunshine on yard chores, getting things done before the snow flies.  First, I tackled the pile of limbs we had accumulated over the summer in our trailer, breaking and sawing up the branches to add to our kindling pile.  Lizzie the Springer Spaniel happily nosed around in the fallen leaves and disappeared somewhere in the back returning with some strange thing she had found to eat. 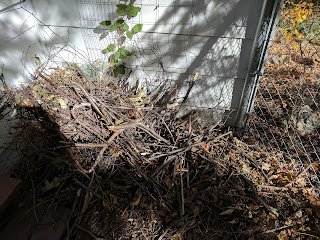 Next, whilst admiring the colorful leaves on the trees and shrubs in our yard, I finished the garden cleanup and spread the straw on the garlic bed. Liz found this somewhat interesting. I'm looking forward to fewer muddy paw prints in the house. 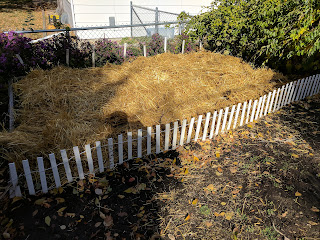 The leaves on the juneberry bushes are striking as are the red-osier dogwoods.  We need rain. Loads of snow would be acceptable. Yes, I did say that.


The red oak tree is looking glorious today, as are the hosta. The tree is a champion. 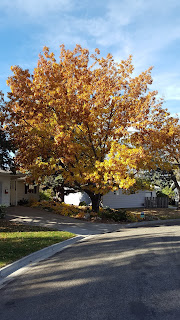 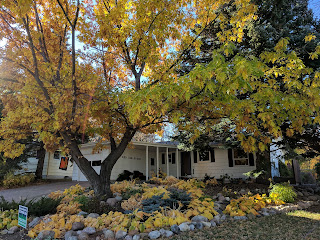 The quaking aspen have begun to turn in the past few days. Frost has killed the impatiens, but the butterflies continue to visit the asters and the ladybugs are present here and there, with an occasional renegade in the house. The late-blooming clematis also persists. 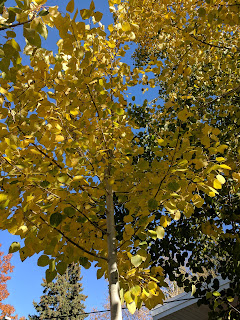 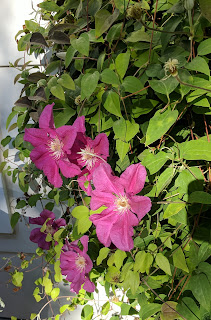 The slate-covered juncos have made their appearance in the yard. Junco hyemalis, hyemalis being New Latin for "wintery."  According to my book Words for Birds "the Latin comes from the Greek cheimon, 'winter', which is related to Sanskrit hima, 'snow.' The Junco is often called the 'snow bird,' as its arrival foretells the coming of winter to its southern range. Slate-colored refers to the sooty black upper-parts and the central part of the tail."

Last up for outdoor chores was to pick raspberries.  We are completely delighted that we are still picking raspberries -- in North Dakota!  I converted some of these to raspberry crisp and Jim loves raspberry pancakes above all breakfast foods. 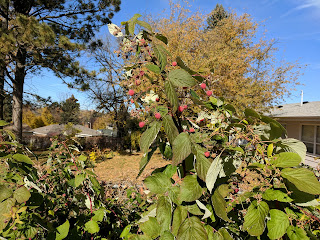 Here's an interesting autumn development: the arrival of dozens of mayflies on our kitchen window. I notice oddities such as these. 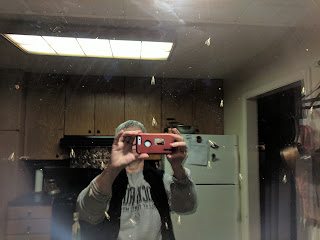 A big bonus to the day was the arrival of Jim's sister Jill, with a batch of her freshly made lefse, converted from the potatoes Jim gave to her.  If you are interested, she takes orders and ships this Norwegian delicacy. Get in touch & I'll connect you with her. 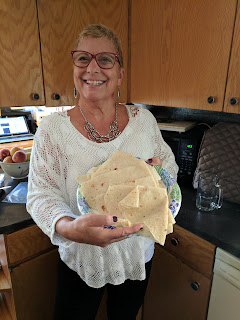 Meanwhile, this is the soundtrack of our lives this time of year. 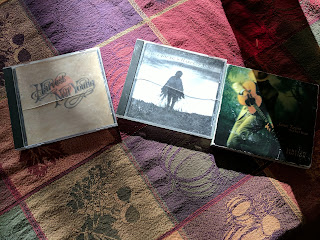 Posted by WildDakotaWoman TM at 3:41 PM