The last Red Oak House Garden Notes was written in October after a very early blizzard shut everything down. Henceforth, we spent the winter finishing a manuscript and planning for the 2020 gardening season, which has now arrived in all its glory.

Gardening is always our solace and it feels especially so during the pandemic. We cling to the few remaining normal pieces of our lives as we watch the news with growing dismay and try to be as creative and resilient as possible while also being good citizens. Like so many, we can't spend time with our elderly parents or other family members and friends, but our days stay filled with gardening chores now, and we fall behind in reading and writing. My arms ache to hold my loved ones close, yet staying busy is an antidote albeit mild. We have nightly Skypes with Rachel (we read books together and giggle over my Max and Wild Thing puppets) and frequent Skypes with my almost 96-year-old father who has a new iPad (a gift from his eldest grandson). One day while I was sorting through photos on my new laptop (which arrived in the nick of time, I might add), I was especially lonely for my daughter, Chelsea, and voilà, I found this recording I made at her DSU vocal performance lab in 2011, the voice of an angel which I confess to having listened to dozens of times now. A few weeks ago I participated in a Twitter book discussion led by Cambridge professor Robert Macfarlane and tonight promises a Zoom cocktail party with longtime friends. Oh, and we've watched a ton of great live-streaming music and mourned with the world the death of the inimitable John Prine (who we've seen in concert several times, most memorably at the National Park Service's 100th Anniversary Bash at the Roosevelt Arch, Yellowstone National Park, with our concert-going pals, Jeff and Linda).


A highlight of early spring was the delivery of a quilt Linda Suchy sewed using the embroidered dishtowels my mother churns out. Linda was inspired earlier this winter when I shared a photo of a pair of jeans my mother embroidered for me and got in touch with her idea. I wasn't able to take the quilt in person to the nursing home in which my mother resides, but I sent her a photo in the mail and the staff kindly snapped another photo. 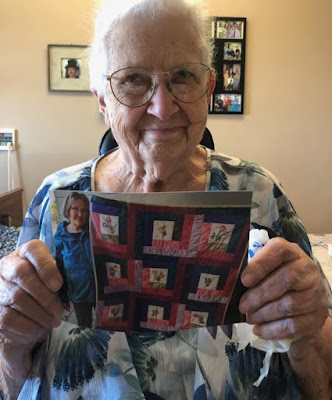 Back to gardening: As usual, Jim couldn't help himself and started his tomatoes on March 15 and he has now transferred these to pots on the patio awaiting the "all-safe" to put them in the ground. As I write these, he has tilled and planted potatoes, peas, and the first crop of lettuce. Each day the number of tomatoes he plans to plant this year increases as his excitement mounts. The fact that he is grounded and I run all of the errands might be contributing to his fanciful planning. My goal is to make it two weeks without a trip to the grocery store (right now I'm at eight days, but my daughter did make an emergency delivery of limes late last night). This will become easier as the garden begins to produce. 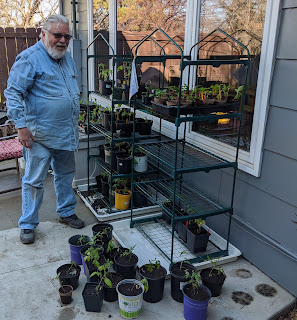 The best part of the 50th Earth Day was the arrival of the wood chip truck, making a delivery I had pre-ordered in December. You can see the short video of the delivery here. The highlight was the driver saying that he always points out the Red Oak tree to his crews when they pass by, telling these young-uns they will never find a more beautiful specimen in this city. The story of the tree is on our website if you don't already know it. The driver was ever so careful to not damage the branches as he backed the truck into the driveway and lifted the hoist. A+ marks I passed on to his supervisor (you can see him in a green hat) and what a fun job he has! 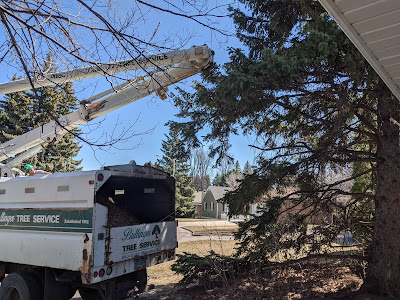 Now the wheelbarrow and scoop shovel are my constant companions and I look forward to less watering and weeding as I transfer this mulch to my perennial beds. Each time I dump the wheelbarrow, I think "Take that, elm seedlings!"
So much -- too much -- of last year was spent dealing with a leaky roof and painting the house. I declared that this year, once I'm done with the mulch pile (I'm getting another delivery in a couple of weeks), I plan to mostly watch my flowers grow. We probably can't travel anyway. It is hard to think of our patio furniture not being used for gatherings if this continues through the summer, but time will tell.

While I work in the mild spring sunshine, I listen for new avian arrivals -- Northern Flickers and our summer resident Northern Cardinal have made an appearance. When I take a break I watch the Slate-colored Juncos pick spruce cone seeds from the ground. The American Goldfinches have returned to their bright yellow color, feasting on the thistle socks we've again hung. I'm placing the mulch in the back where there is more sunshine and the perennials have popped out, waiting for the hostas in the shade of the Red Oak tree to make an appearance so I don't inadvertently bury any tender shoots. Right now one can almost watch the irises grow (upper right corner in the photo below). You can see I've already popped for a hanging plant, hungry for some bright colors in the drab yard. Tulips will bloom soon.

It is satisfying to be a participant in the cycle of growth, both watching the aspen catkins emerge and transferring dead trees in the form of wood chips back to the earth as mulch.


"Birch trees are least beautiful when fully clothed. Exquisite when the opening leaves just fleck them with points of green flame, or the thinning leaves turn them to a golden lace, they are loveliest of all when naked. In a low sun, the spun silk floss of their twigs seems to be created out of light."
Nan Shepherd The Living Mountain


Posted by WildDakotaWoman TM at 2:06 PM