Having been inspired by Laura Anhalt a few years ago, I have slowly been acquiring old metal coolers for outside storage of seeds for my bird feeders. This in my attempt to foil the squirrels who have for all the years we've lived at Red Oak House busily chewed through every other container, mostly tubs made of thick rubber. Yes, I have stored the tubs indoors to solve this problem, but it is awfully handy to have the seed right by the feeders and not indoors, especially during the coldest winter months. That, and seed storage inside is an attraction for mice. (I'm an animal lover, but I draw the line at mice and squirrels in my abode.)

Our friends Laura and Tracy have a cooler on their deck, and I spotted it one day when we were over for cocktails. Hence I started to hunt for one of my own. This was in the years when both of my parents had moved into senior living facilities and we (their "children") assisted them in myriad ways, including maintaining their window bird feeders. In the case of my mother, at first we were able to keep a tub stocked in her room, but then came the Covid lockdown, with its countless challenges for family members, with for an agonizing long while only "window visits" allowed and later the rules and space constraints made indoor storage impractical. The window where my mother had enough bird feeders that her room was the talk of her wing of the building. I should add how grateful we were that she was on the ground floor. I cannot imagine how it has been for loved ones on above-ground floors.

My mother and I would talk on the phone almost every day. Sometimes she would say, "the birds are hungry" which meant the feeders were empty. Sometimes she would say, "the squirrels are looking in the window" which meant the squirrels were attracted to her feeders. My brother was here and we discussed this dilemma and he predicted that it would take the squirrels about two days to chew through the latest rubber tub. Of course, he was correct. So I went on the hunt for an old metal cooler. I found one, and placed it at her window where it stored the sunflower and suet and thistle feed for her feeders until she died. 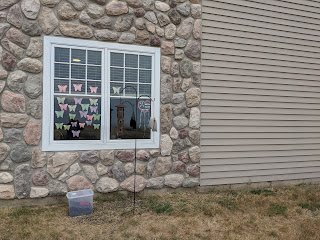 After she died, the cooler was returned to me and I use it for.....bird feeder seed storage. Then I decided I needed another one. And I found one at a local antique store. Then, I realized I might need at least one more, a third one (there are many windows at Red Oak House and many bird feeders). Back to an area antique store where I thought I found an affordable solution. Two days later I looked at the window to see a squirrel down inside it, looking out at me. The container was some sort of fiberglass, not metal, and of course, the squirrels are hungry and industrious. 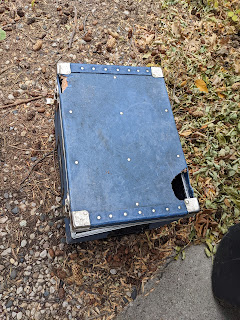 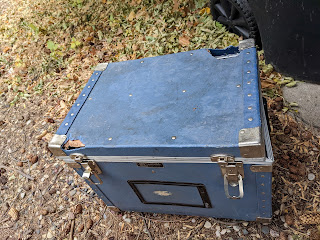 So that container went out in the garbage today, replaced by ..... a third (and final) metal cooler. Complete with a latch. 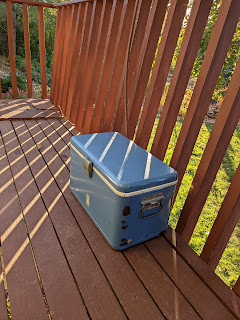 Posted by WildDakotaWoman TM at 4:41 PM