Another important historic trail in North Dakota that has been on my mind this past year is the Fort Keogh Trail. This trail passed nearby to where I grew up in Slope County.

As shown on the map below, it ran from Fort Abraham Lincoln (near present-day Mandan, ND) to Fort Keogh, west of Miles City, MT.

Completed during the summer of 1877, it was also known as the Post Office Route no. 35,051 and began operation in 1878, with stations about 18 miles apart. "The route roughly followed the Custer Trail of 1876...[and] afforded the natural and most convenient places to set up stations, which usually consisted of a dugout in the side of a hill...." (Old Red Old Ten)

"Two miles west of Amidon the mail road is around 150 yards north of the present highway No. 85 and crosses Sand creek about a mile and a half north of where you would be if you would go due west from Amidon. A station was located on Sand creek. (Roberts' Letter 3-24-49) After crossing Deep creek about a mile below the H.T. Ranch the road continued to the Little Missouri, where there was a station by that name." (Fort Keogh Trail, TRNP, pg. 7) These stations were the ones that my grandparents and parents remembered.

This photo from the TR Center archives shows four men standing on the location of the Fort Keogh Trail at Sand Creek (with the Little Missouri River cottonwoods and banks clearly shown).

"Most of the stations were mere dugouts in the side of a hill, with a single window and door in front...The first real building [seen] since leaving Bismarck was a little stock tender's cabin on the western bank of the Little Missouri. (Fort Keogh Trail, TRNP, pg. 8)

Harry Roberts writes in As I Remember regarding the Keogh Trail in Slope County at Sand Creek "I have pictures of the building [I wonder what happened to these] and also pictures of two graves of the two men that took care of the relay horses there. The Indians discovered the horses grazing out a little ways from the buildings and proceeded to run the horses off. These two men grabbed their guns and rushed out to regain the horses and both of them met their death." (Slope Saga, pg. 1120)

The photo below by the famous photographer L.A. Huffman, who lived at Fort Keogh, shows the wagon trails along the Fort Keogh Trail.

"Huffman never forgot his trip from Bismarck to Fort Keogh in the open buckboards of the mail carriers. Exposed to the wind and subzero temperatures without adequate clothing, he suffered so severely that he was forced to lay over at a little stage station midway along the trail. The first night out an outlaw who was under suspecision in connection with the disappearance of some army mules stopped the stage and climbed in. Curiously,, he sized Huffman up as a fellow-fugitive and generously offered to attempt a stand-off while Huffman got away should an attempt be made to apprehend them." (Brown, Mark H. and W.R. Felton. Before Barbed Wired: L.A. Huffman, Photographers on Horseback, c1975, pg. 14)

His position at Fort Keogh was post photographer and while there he witness the surrender of important Native American chiefs and about two thousand of Sitting Bull's followers.

There is an interesting Bismarck Tribune article published in 2009 that tells readers more about the soldier named Keogh, after which the Fort and Trail is named. Song Tied to Little Bighorn's History

In a document called Buffalo Hunt in the 1880s, available electronically through the Montana Memory Project, the tale is told of W.E. Limestone and 3 of his friends traveling to Fort Keogh to hunt the last of the buffalo in December of 1880. They almost froze to death on the trail.  This is just one of the many colorful stories centered on the Fort Keogh Trail. 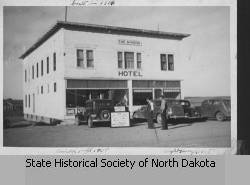 The sign in front of this hotel reads: "We burn our coal mines, fossilize our ancestors, petrify our wood, welcome our guests, stop and see us, Amidon Community League." (Photo is dated 1938) My great-aunt lived in Amidon in the early days and operated a store with her husband.

The history of western North Dakota is as rich with these stories as it is breathtakingly beautiful in its landscape.

Posted by WildDakotaWoman TM at 2:53 PM