Fifteen below at noon New Year's Eve 2017 with record lows in the night convinced me that this was a year to participate in the area Christmas bird count by making observations at the Red Oak House feeders. These are my tools for the day. 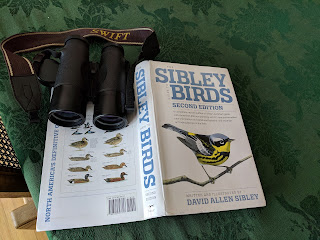 The hyperborean dawn revealed that the kitchen window suet feeder had fallen to the ground. Red Oak House's Word of the Day, hyperborean (late Middle English) is from the Greek huper for beyond and Borean for Northwind. 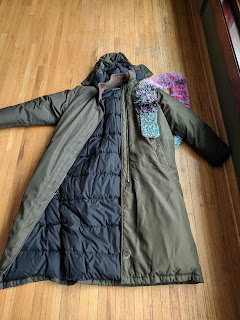 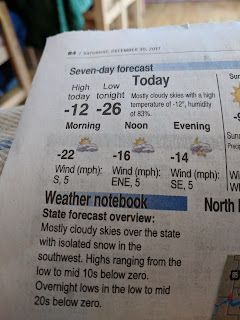 I finally channeled my inner North Dakotan, put on the serious coat, and went out with the ladder to re-hang the feeder, filling it with the Suchy beef suet they gave us at our annual Winter Solstice potluck. 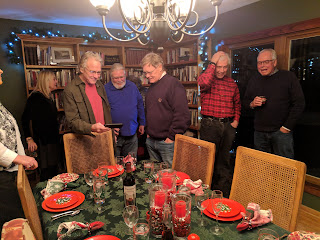 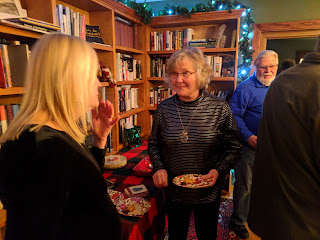 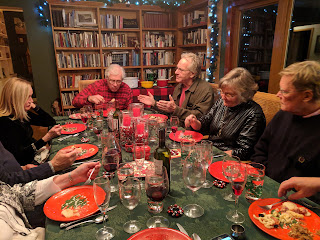 Whilst I was outdoors, I also brushed off last night's snow from the surface of the sunflower feeder. Lizzie, the Springer Spaniel, was of no help, but she was eager to be with me nonetheless, and then equally as eager to go back into the warmth of the house, to nap in the sunshine. 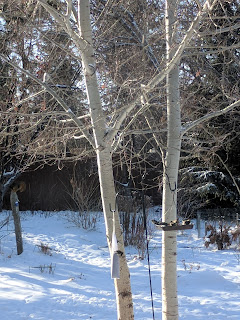 The thistle and sunflower feeders are covered with pine siskins and I also observe them scratching about in the spent vegetation of the perennial beds. By this point of the winter, the birds have stripped the crab apple trees of their fruit, yet the saffron dots of bittersweet remain as a bright spot in a somewhat drab landscape. The low sun shone brightly all day. 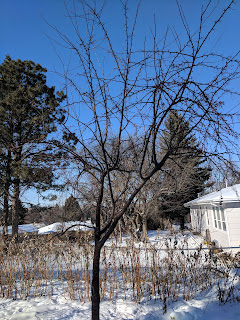 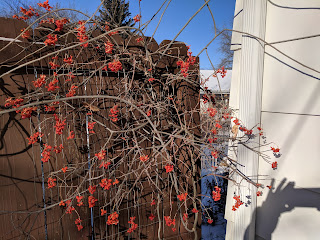 With a cup of lemon tea, I settled in near the woodstove to read a couple of books, checking the feeders now and again throughout the short day while Jim napped while he "watched" football. 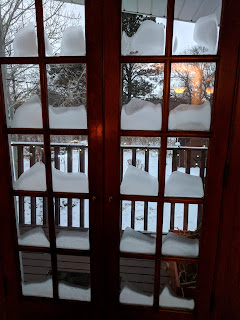 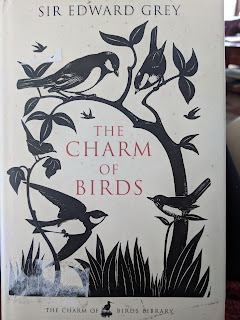 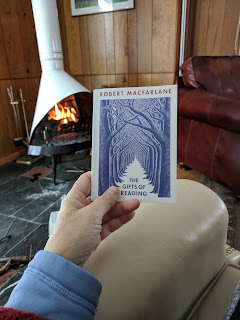 Earlier today, Jim had been over to get our daughter's dead car going, attaching the battery charger in the hopes that this will do the trick. She is not alone in struggling with this, a common problem here on the northern plains in these frigid days. Jim has ice-fishing on his mind. The car didn't start and I can see neighbors dealing with the same issues.

Last year we constructed and mounted an owl nest in the big old green ash tree, and a couple of weeks ago we placed a hunk of beef soup bone within in the hopes of luring nesting great-horned owls. We are certain this gave the neighbors something to puzzle over--"What are they up to now?" A few hours later, Jim spotted one plucking at the meat, but we have not seen it since then. For Christmas, I gave Jim a beautiful screech owl nesting box and am confident that eastern screech owls will use it as I so often see and hear these in our yard. 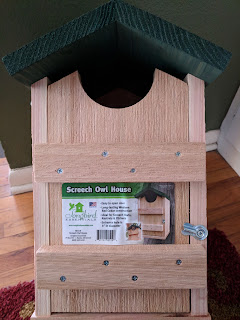 I researched the Hairy Woodpecker in my book Words for Birds: "Dendrocopos villosus which is Greek for "tree cleaver" and coined from dendron, "tree," and kopis, "cleaver". villosus which is Latin for "hairy or shaggy"; the reference is to the general appearance of the plumage, which gives the species a hirsute but combed appearance." The Downy Woodpecker is "Dendrocopos pubescens, Latin for "coming into puberty" which seems to be related to the species being less hairy and less mature." (pg. 168) The Downy is the smaller of the two.

On and off all afternoon, this downy woodpecker clung to the huge blue spruce in the front yard, puffed up for warmth, feeding on the resin. Later, I observed the same behavior by the nuthatches. I hoped for a brown creeper to show up as I have occasionally observed one on this big tree that is right outside my kitchen "office" window. 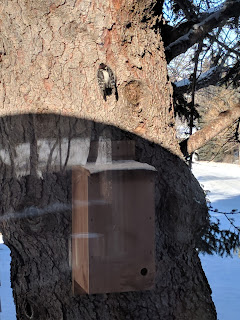 We are not the partying sort so our end of the year celebration will consist of my homemade Swedish meatballs, made from Striefel beef and Napoleon sausage. The special taste comes from the cardamom, and the lingonberry jelly I include in the creamy sauce. Add to that some of our own bubbly, with daughter, Chelsea, as our guest and we will savor the last day of 2017.  I included black-eyed peas to the menu, as they are a Southern tradition, thought to bring prosperity to the upcoming year. Remember, my father is from Mississippi. Whilst I cook I listen to Jason Isbell and Greg Allman.

The sun has set and my tally of birds is:

The hoped-for brown creeper was a no-show as were any owls. Here's to more birding in 2018!

A New Year's Eve full moon has risen, good tunes are playing in our kitchen, and while we wait for our child to get off from work, we dine on mussels, crackers and cheese, with white wine.

I wish for you as much joy and love as I've received in the past year, highlights of which include the Bismarck Women's March on the capitol grounds, the beginning of my blog, new friendships, my dive into Twitter, an abundant garden, many good books, time with my parents and Rachel, my husband's 70th birthday, our trip in the Midwest and to the Rocky Mountain Folk Festival, my visit to one of my oldest friend's home in Tucson, and my daughter Chelsea's adventure to Colorado for vocational training (it is good to have her home). A little thing in the year was a revelation to one of my best friends my secret ingredient for marinara, a resolution to not hold on to such silly things anymore. And how could I not include the total solar eclipse in Wyoming!

I am a shy and reticent person, an introvert, and too old to even want to change this about me. Writing this blog has been a huge step for me and the universe has answered me back with more blessings than I could ever have dreamed. Jim cheers me on every day and I love him for that.

And that is the truth.

"And now let us believe in a long year that is given to us, new untouched, full of things that have never been, full of work that has never been done."
Ranier Maria Rilke
Posted by WildDakotaWoman TM at 5:10 PM