It got to be pitch dark, at last, and the multitude groaned with horror to feel the cold uncanny night breezes through the place and see the stars come out and twinkle in the sky. At last the eclipse was total, and I was very glad of it, but everybody else was in misery....Then I lifted up my hands--stood just so a moment--then I said, with the most awful solemnity: "Let the enchantment dissolve and pass harmless away."  Mark Twain, A Connecticut Yankee in King Arthur's Court, 1889 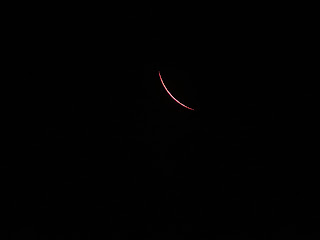 The last slice of the Wyoming eclipse, photograph by Jeff Weispfenning, August 22, 2017.

The backstory is that it took our group of hippie retired friends a nanosecond to agree to travel from Bismarck to Wyoming for the penultimate sky viewing experience, the total solar eclipse.

So, last week we snuck away from garden chores and headed southwest, with four close friends (sadly one couple had to cancel).   We had searched around for a concert in the area of totality and Jeff, the concert wizard, honed in on the Rocky Mountain Folks Festival, in Lyons, Colorado, courtesy of Planet Bluegrass.  I told everyone that this event had been on my bucket list for years and we were all in!   I'll come back to the festival later in a future blog post.

After the weekend of festivalin', we were in a blissful state and arose on Monday, the day of the eclipse to depart Longmont at 4 a.m.  Already the traffic on the freeway was bumper to bumper and we just did not know what to expect for the drive to our viewing destination, Casper, Wyoming.  We did know that many of the folks from Colorado were going to be traveling to Glendo State Park and, sure enough, they were. 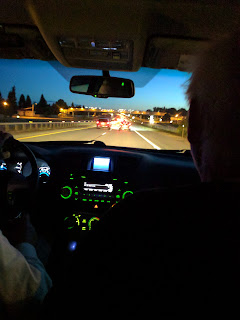 The line of cars trying to get into the park snaked back for many miles and we were grateful that, although we'd considered Glendo, Ken Rogers had suggested that we go to his sister's Casper backyard, directly in the line of totality.  Fortunately, once we got past Glendo it was smooth sailing at 75 MPH into Casper.  Sally and Joyce, Ken's sister and mother, were ready to host us, and after introductions and home tours, we settled into our final preparations.  Jeff set up his camera and the rest of us settled into chairs.  Jim poured Bloody Marys.  I had the ultimate eclipse beverage, a Corona beer.  We sang songs like "Moon Shadow" and others, led by the inimitable Debi Rogers.  Are we a bunch of folkies, or what? 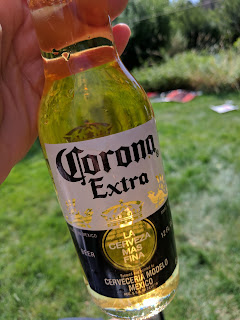 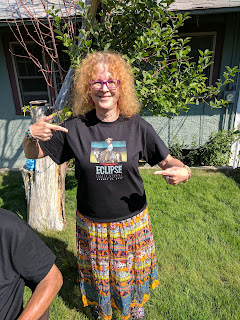 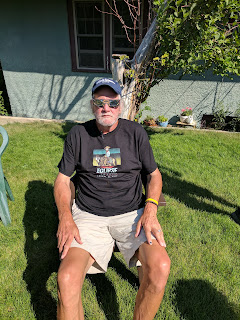 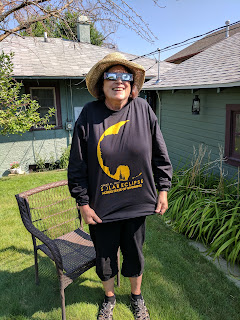 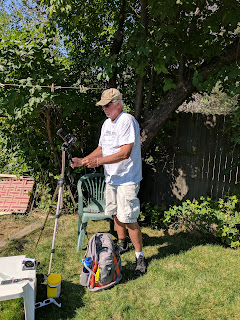 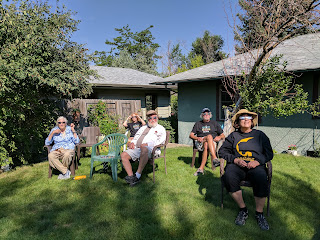 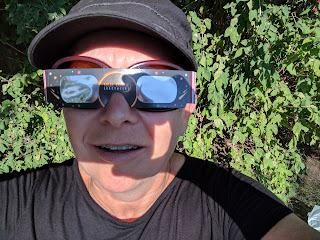 I read passages from a wonderful eclipse book aloud to the group, a book that I'd read during the weekend's folks festival. 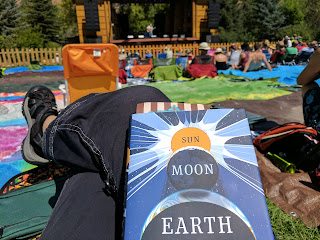 Then, it started, and Jim popped the bottle of champagne. We carefully followed the expert's instructions and only looked through our funky glasses that Ken provided. We marveled as we observed the fading golden light and the cooling air.  When the eclipse was at about 80% and the gloaming began, the birds stopped their singing and the crickets began to chirp.   I pointed out the brilliantly shining Venus to all.

And, then we grew silent.  The two minutes or so of totality were everything we'd anticipated--pure rapture.  I didn't even try to take photographs.  I just watched in awe and listened to the reverential comments of the other members of the party, and, yes, I had goosebumps.  The Bailey's Beads were not as pronounced as I had hoped, but the Diamond Ring was marvelous, and our glasses came off.  The pulsing corona was, as best described by my friend Terry Tempest Williams, watching in nearby Grand Tetons National Park, "the spectacle was a beauty unimaginable.  The word 'Epithalamium' comes to mind."

The Diamond Ring reappeared and the light of our sun returned. I laid down on the grass to watch the final moments as the sun returned and just felt the earth revolve deep in my bones, changed forever, in complete awe. Ken's mother, Joyce, declared emphatically "It's going to be an awful long time until we find something that interesting to do!"

Ken's sister Sally then served us all scrumptious elk chili and it was time to make our way homeward.

The picture Terry Tempest Williams shared from NASA was one of my favorites and as the day went by we all happily showed one another the pictures and tales of friends and family who had watched in other places all around the country and talked of making plans to travel to see the next one.  It is true, total eclipse watching is addictive. 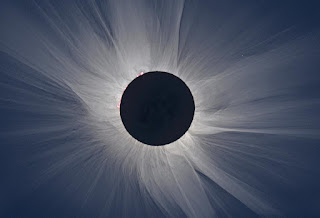 Here is one of the passages I read from the book Sun Moon Earth by Tyler Nordgren (Basic Books, 2016):

Yet human history is inextricably linked with our need to accurately understand the world in which we live. From the time of our earliest ancestors, as they hunted for food and then developed agriculture, we would not have survived to the present without having unlocked the mysteries of the seasons and the clockwork patterns of the sky. This is a process that need not be opposed to religion, as astronomers going back to Kepler (a Protestant) and Galileo (a Catholic) attest. The current director of the Vatican Observatory, Brother Guy Consolmagno, a Catholic Brother and PhD planetary scientist, once told me that the proof of God is in the fact the universe is knowable.
So what do we know? We know that we occupy a special place, on a special planet, with a special moon, during a special moment in history. We are privileged to inhabit a habitable world that has been capable of sustaining complex life over billions of years, thanks to a moon created by a chance event. But that chance event is a natural part of how solar systems form--and we now know of over a thousand others out there in space, with more being discovered every year.
All this we know, in part, due to eclipses. Through these momentary alignments, the inhabitants of this planet--in ancient Chinese palaces, Babylonian observatories, Mediterranean cities, and Mayan tempest--all deduced that our world is one of repeating patterns that are knowable. From these beginnings we have followed the path of the Moon, the Sun, and a galaxy of planets. The secrets of the universe have been revealed by shadows stretching over the light-years between stars. Because of these shadows, we now have a galactic context in which to understand how common planets may be, while realizing, as we look around at our own solar system, how utterly inhospitable most planets are. While we may not be alone in the universe, we are still precious, as is the world that sustains us. All this we see when the Sun disappears behind the Moon and for a brief moment each one of us is aligned with the heavens.


While I write this, Jim is making tomato juice and harvesting potatoes. For what remains of my days, I will have those moments of totality in my memory and the blessing of experiencing this with such a wonderful group of friends is a gift beyond measure. In the span of about two hours, all of our perspectives had changed.

For now, I leave you, gentle readers, with a poem.

In that great journey of the stars through space
About the mighty, all-directing Sun,
The pallid, failthful Moon, has been the one
Companion of the Earth. Her tender face,
Pale with the swift, keen purpose of that race,
Which at Time's natal hour was first begun,
Shines ever on her lover as they run
And lights his orbit with her silvery smile.

Sometimes such passionate love doth in her rise,
Down from her beaten path she softly slips,
And with her mantle veils the Sun's bold eyes,
Then in the gloaming finds her lover's lips.
While far and near the men our world call wise
See only that the Sun is in eclipse.

Posted by WildDakotaWoman TM at 12:18 PM