He arrived in Rhame, North Dakota, when I was a senior in high school, this new, young pastor at First Lutheran Church, fresh out of Wartburg Seminary. Rick Watson and I got acquainted pretty quickly because I was the church organist and pianist, and I sang in the choir. Little did I know that this talented and brilliant young man from Mott, North Dakota, would become one of my lifelong mentors and a cherished friend.

Now, I look back at the more than forty years of our friendship. He counseled me, and the Ohm family, through the death of David. This young pastor listened to rock and roll music, and the upper bedroom of the parsonage in Rhame was crammed full of good books, on a wide range of topics.

When I was struggling in my first quarter of college in the Red River valley, far away from the wild and rolling prairie of Slope County (I bummed a ride home every single weekend but two), it was Rick who said I might consider transferring to Dickinson State (then) College. In fact, he gave this advice in that book-filled parsonage room. And thus, he changed my destiny. He also connected me with Dr. Carl Larson, who had served as his undergraduate advisor and thus became mine. Just yesterday I received a Christmas letter from the Larsons and it is so good to know that all these years later one can retain connections with such generous and intelligent folks.

Then, as my first academic year was coming to an end, it was Rick who suggested that I should take a summer job as a counselor at Badlands Lutheran Bible Camp, south of Medora, in the Bad Lands of North Dakota and so I did. On occasional weekends, Rick would show up with his guitar and his songs and keep us all laughing. 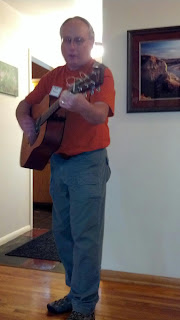 'Cause folks, Rick is one funny and fearless guy, with, dare I say, a wicked sense of humor. This, on top of an impressive vitae filled with artistic and academic accomplishments. He was a pastor for quite a few years and he has been teaching at Minot State University since 1991. Humanities and communication arts. He has influenced countless people, young and old. He has known my husband for longer than I have, as they were college students together. What stories they tell!

When I was working my way through college at the record store in the Dickinson mall, Rick would stop in to check on me and buy some vinyl. Nowadays, our paths cross at concerts in Bismarck and parties on the Suchy Farm south of Mandan.

All this time he has been writing poetry and songs. His website High Plains Creole is a great place to learn more about him. He pops up on a regular basis doing live music, mostly in Minot, in "classrooms, church basements, and coffeehouses." Rick is married to the lovely Jonelle and has two sons. It was my honor to nominate him for a DSU Alumni Fellow award and to be there when he performed on campus for Heart River Writers' Circle, on campus to accept his award. 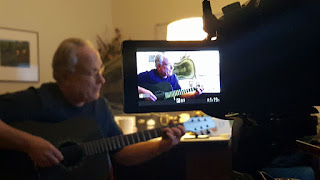 In 2004, he was named a North Dakota Associate Poet Laureate. Something in the Mott water, I guess. His social media is endlessly interesting.  Buy some of his music and poetry to enjoy for yourself and support a fine ND fellow. He often gives people nicknames and these characters appear in his poetry. Mine is, for better or worse, "Lil McGill" (inspired, I think and hope, by the Beatles).

Here is a poem he wrote for my 2017 birthday. As usual, Rick gets the last word.

Lil (Fidel) McGill on her birthday

we drove against the south Wind
all the way to the capitol city of
struggle, our own Lost Colony home

the wind was up
all the way from Africa,
maybe, or Spain,
or Memphis, at least

Her birthday festival went into swing
all the food was Mexican, too,
as if there never had been a wall

tortillas, meats of three kinds,
the greens and the reds and the
lime colored juices

tequila, and wine
red as revolt,
or clear and white--you could see through
the glass to the garden all around

the violets bloomed beneath the trees,
early in May, and the dry air hit 90 degrees
the garden was in; the flowers were coming
the bees acted peacefully, drunk in some joy

music and mystery made
by people, food and whine,
the eternally now of family and friends

we ate and drank to the people's hopes
to the proletariat of education
to the hopes of history, Reformation,

to the lusty spouts of garlic leaves,
the 10,000 future tomatoes
of every shade of red in the sky

so huge it would take all day to walk
a house gone empty, now falling down
after the last time the earth blew away

of guitars, and songs we still need to sing
even though many who need them are dead
and who knows? ...but sing, touch the strings

and then of course,
the birthday song to the girl
made a woman by us,

by her sorrow, by love and drought,
badlands, war and the dreams of holy rain
until the darkness was not a threat

the darkness, the wind
became a song inside our bones
and there we were together: at home