Going to visit my Aunt Junette

My daughter and I made a date this week to visit my elderly Aunt Junette Henke at Edgewood Vista Assisted Living in Bismarck. 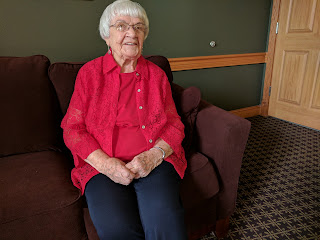 I am blessed with many very strong and independent women in my life and my Aunt Junette stands in front of that line.  She is my godmother, my mother's older sister, and, like me, the middle child.  She is 93 years old and is one of the greatest "encouragers" of my life, always pushing me to learn more and be the best possible version of myself that I can manage.  At a really low point in my life, she firmly told me "you're a survivor" and, by God, she was right!

Born in the hardscrabble hills of Slope County, she attended Dickinson State Teacher's College and was an elementary teacher in various schools until she retired.  She and her husband Alan Henke had a ranch north of Marmarth, ND and she was one of the authors of The Slope Saga.  When I praise her for all of the efforts that were required in writing that epic work (1,178 pages!), she just chuckles and says "Fools rush in where angels fear to tread."  Bear in mind that in the time that the book was being written she drove on Bad Lands gravel roads, back and forth from their ranch north of Marmarth, to Bowman 56  miles roundtrip!


The area newspaper, the Bowman County Pioneer, allowed the committee members to use the facility for the production of this tome on the condition that they would only arrive after they'd closed for the day.  There they would furiously work through the night.  They sent solicitations to the people of Slope County, who dutifully sent in their submissions, and then they had to go to work editing these, writing many sections on their own, and doing the layout.  It was a tremendous leap of faith on their part as they were required in the contract to print 2500 numbers of copies with no idea that the book would actually sell and pay for itself. 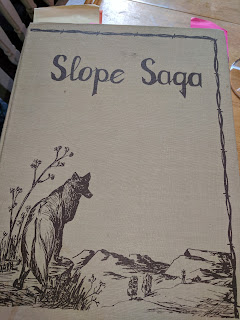 Pay for itself, it did, in spades.  It is now considered to be a rare volume and is very valuable, and, I know, treasured by its owners.  My copy is signed by her and well worn.

How blessed am I that to this day that when I have a question about Slope County, I can call my aunt and her quick mind will have a ready answer.  Sometimes that answer is located in The Slope Saga and many times it is in her head!  When I express my gratitude she laughs and says "It is good for my brain to recall these things."  I know she is happy that someone is still interested in these stories.

Today, she requested that my daughter, Chelsea, play the Edgewood Vista grand piano for her, and Chelsea did.  Here is the video of one of the numbers she played.  When I watch I am naturally "mother-proud" and I tell myself that all of those hours in the driveway of her piano teacher Margaret Marcusen were worth it. 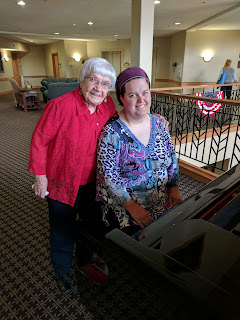 Since we were in history mode, we went home, picked up Jim, and went to beautiful downtown Bismarck for an evening history walking tour offered by The Bismarck Tour Company.  The weather was fine and it was fun to stroll the downtown streets, listening to the stories of Bismarck's past, admiring the beautiful historic buildings.  Various Bismarck stories were told, including the tale of Elizabeth McClellan, a brothel madame who amassed quite of bit of money in her time.  Sadly, we were not able to go into the tunnels underneath the downtown area.  But we did hear interesting tales of soldiers coming to Bismarck from Fort Lincoln, visiting the prostitutes, getting drunk, and sometimes drowning in the Missouri River on their swim back, or falling in the treacherous river ice if winter.  We walked by the famous Patterson Hotel, first called the Hotel McKenzie, the site of so much of Bismarck's early historical and political drama.

One day in the life of me, a history nerd, a Slope County gal.
Posted by WildDakotaWoman TM at 11:28 AM