One of my favorite Desert Mystics, Ed Abbey

It had long been my intention, should I ever get to Tucson again, to visit the Special Collections Library on the University of Arizona campus.  This past April, I spent a perfectly blissful week in the southern Arizona city, with good friends, and had a few days for solo exploring. One day I took a Lyft cab to the campus and headed straight for the libraries.

The dedicated librarians at the Special Collections Library led me to the computer to search for my topic, a longtime favorite author of mine, Edward Abbey, who upon his death had instructed that his papers be deposited in this safe place.  The staff brought me my requested gray archival boxes, one at a time, jammed packed with treasures, and I spent a rapt couple of hours looking through these, making notes, and taking photographs. 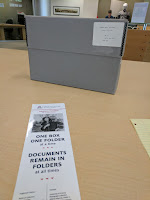 The iconoclastic Abbey was known as a "desert mystic" and published a number of books, the most well-known being Desert Solitaire and The Monkey Wrench Gang.  His biography is well known.  Born and raised in Pennsylvania, he was basically a hobo on a westward train, got out, after which was never the same because he became enraptured with the American West and thus wrote passionately about the West and other topics until he died.  He studied philosophy at the University of New Mexico, Albuquerque, and he tramped around the American West, in various odd jobs, including stints in fire lookouts in national forests; perhaps the most famous time spent living in a trailer in Arches National Park as a seasonal employee for the National Park Service.  In his Journal: a Lookout's Logbook Glacier National Park, he wrote "the secret log" and "forest fires: Smokey the Bore is full of shit" and "whose rights take priority? How about wilderness areas banned to all humans?" 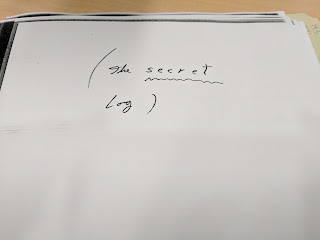 He scribbled many thousands of words in his notebooks and drew pictures, keeping track of his wanderings of his deeply insightful observations.  He published beloved books that galvanized a generation of Americans hungry for his words about his wild life, inspired by his writings and his activism.


He also gave a number of memorable speeches, including one time when he walked to the podium, took out his pistol, placed it in plain sight of the audience, and proceeded to hold forth on his thoughts about wild places and the need to protect them.

One of the most famous speeches he gave was captured on film and is known as "The Cracking of Glen Canyon Dam".  He spoke to a gathering of people who were outraged that the dam had flooded gorgeous places along the Colorado that no one would ever see again.  The reason it is called "The Cracking of Glen Canyon Dam" is because this merry band of environmentalist gathered on the dam and let out a roll of black plastic across the front of the dam symbolizing their hopes and dreams for the Colorado to flow wild once again.

The cracking of Glen Canyon Dam brought to you by the Sacred Land Film Project.  A friend of mine, Bart Koehler, was at this event, and was, like the vast majority of the people in attendance, not interested in violent opposition, but rather in passionate engagement and resistance to out-of-control development in some of the country's last wild lands.  Bart was singing and playing his guitar at this event and went by the moniker "Johnny Sagebrush".  I'm proud of him and can report that he is still, all these years later, working hard to protect wild places, no matter what life has thrown him in his pathway.   Here are a couple of newspaper articles describing Bart and the magic he makes with his guitar. 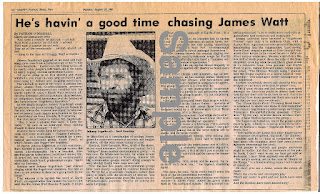 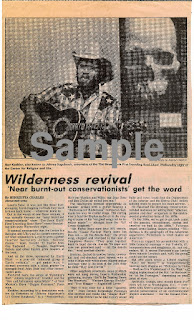 But, back to Abbey.  A thrill went through me as I held in my hands his notebooks and manuscripts. 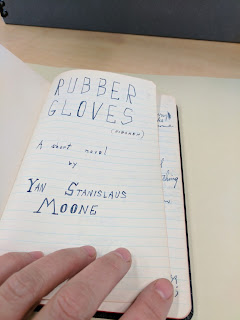 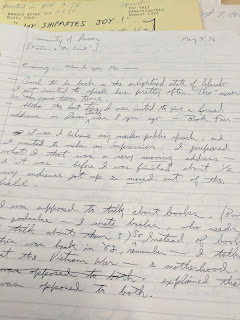 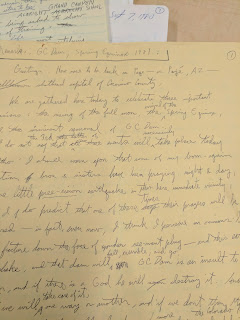 In his journal notes from a hike in the Cabeza Prieta wilder, ess he writes that it will be a "self-imposed ordeal"...."Why? The need, I guess, for authentic experience, as opposed to the synthetic (books, movies, TV)." 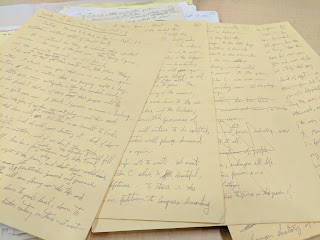 "This is going to be a long fucking march." 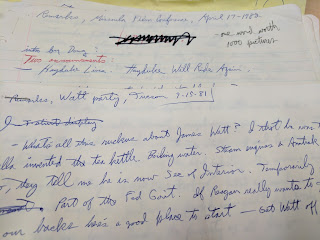 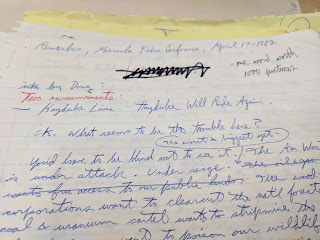 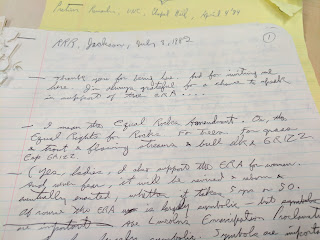 Abbey gave his old friends very specific instructions to follow upon his untimely death.  They wrapped up his corpse in an old sleeping bag, put him in the back of a pickup, and drove the body to the Cabeza Prieta wilderness, where they stashed it in an undisclosed location for the vultures to pick.  To this day, many make the pilgrimage convinced they might just be the one to find the remains.

In Desert Solitaire he wrote "In these hours and days of dual solitude on the river we hope to discover something quite different, to renew our affection for ourselves and the human kind in general by a temporary, legal separation from the mass. And in what other way is it possible for those not saints? And who wants to be a saint? Are saints human?
Cutting the bloody cord, that's what we feel, the delirious exhiliration of independence, a rebirth backward in time and into primeval liberty, into freedom in the most simple, literal, primitive meaning of the word, the only meaning that really counts." (page 137, c1988 edition)

"If necessary, we agree, a man could live out his life in this place, once he had adjusted his nervous system to the awful quietude, the fearful tranquility. The silence--meaning here not the total absence of sound, for the river and its canyon are bright with a native music, but rather the total absence of confusion and clamour--that would be the problem. What Churchill spoke of as "bloody peace"--could we bear it for very long? Yet having known this, how could we ever return to the other?" (page 141, c1988 edition)

"No, wilderness is not a luxury but a necessity of the human spirit, as vital to our lives as water and good bread. A civilization which destroys what little remains of the wild, the spare, the original, is cutting itself off from its origins and betraying the principle of civilization itself." (page 148, c1988 edition)

In The Journey Home he wrote   "One wishes to go on. On this great river one could glide forever--and here we discover the definition of bliss, salvation, Heaven, all the old Mediterranean dreams: a journey from wonder to wonder, drifting through eternity into ever-deeper, always changing grandeur, through beauty continually surpassing itself: the ultimate Homeric voyage."  (page 201 Dutton edition, c1977)

He goes on to write "The boundary around a wilderness area may well be an artificial, self-imposed, sophisticated construction, but once inside that line you discover the artificiality beginning to drop away; and the deeper you go, the longer you stay, the more interesting things get--sometimes fatally interesting." (page 230 Dutton edition, c1977)

My story would not be complete without the telling of this odd tale.  Once shortly after 911, I flew to Davis, CA to see a friend.  I changed my return flight, something that immediately "red-flags" a flier for the TSA.  I got to the airport for the flight and realized that the book I had in hand was The Monkey Wrench Gang.  Perhaps this was not the best choice for airplane reading.  With this combination of coincidences, I got pulled aside for additional screening.

You can see from this photo of our Red Oak House bookshelves that Abbey is a household favorite as his works take an entire shelf.  If you've not read his works, sit down with one, and I promise you it will be an escape to a hot and quiet place somewhere in the American West, to some of Abbey's favorite wild places. 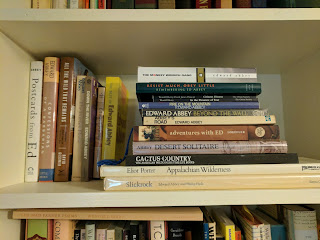 Posted by WildDakotaWoman TM at 3:02 PM